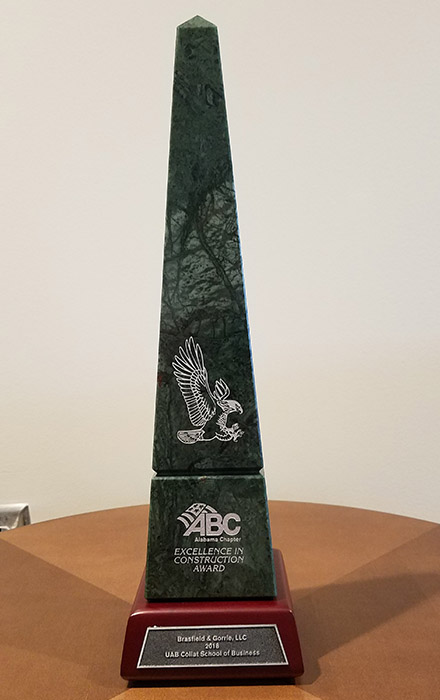 The UAB Collat School of Business’s new state-of-the-art building on University Boulevard was honored recently by the Associated Builders and Contractors (ABC) Alabama chapter. During an awards ceremony at The Club in Birmingham, the $37.5-million facility and its general contractor, Brasfield & Gorrie, were honored for excellence in construction.

The 108,000-square-foot building, which opened in August 2018, was designed with input from students and community business leaders so that every detail enhances the learning experience while preparing students to work in modern business environments. The facility features breakout rooms, an innovation lab, classrooms designed for team-based learning, a high-tech finance lab, sales role-playing rooms, a three-story atrium, an auditorium, a career center and quiet study spaces.

The ABC awards are a premier competition within the construction industry to recognize outstanding construction projects by Alabama contractors. It uniquely acknowledges a project’s entire construction team – the contractor, the designer and owner.

This year marked the 29th anniversary of the annual awards program which recognizes the outstanding projects of the year. More than 50 projects were honored in 2018 in a variety of categories, from healthcare facilities to historical renovation projects to government buildings. The Collat School of Business was honored in the Institutional $25 million - $50 million category.