The Security and Privacy In Emerging computing and networking Systems (SPIES) group, led by Dr. Nitesh Saxena, conducts research on multitude of topics related to the security and privacy of emerging systems or paradigms. 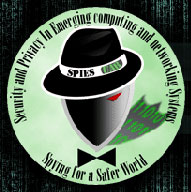 A computing and networking system is considered emerging if it has already started getting deployed in the real-world (albeit not to its fullest capacity), or is deemed promising for a wide-scale deployment in the near future. Currently, these emerging systems range from mobile and wireless networks (such as those involving smartphones, sensors, and RFID devices) to the Internet class of systems (such as P2P systems and online social networks).

The goal of the SPIES group is to improve the security of emerging systems. With this goal in mind, the group is currently running many projects centered around:

The SPIES research has been supported by multiple grants from NSF, Google, Cisco, Comcast, Intel, Nokia, and Research in Motion.Save