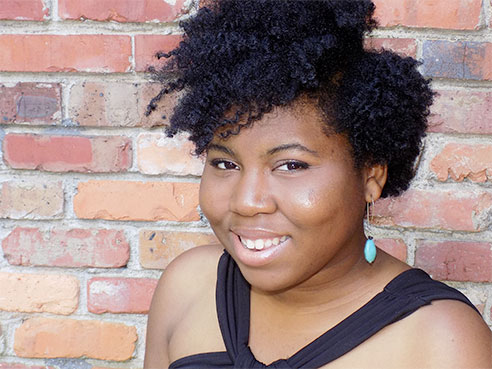 “I’m echoing what’s been happening recently and I’m also bringing in the past so we can think about the bigger picture,” says Jones.

Jones received $30,000 through the Rona Jaffe Foundation,  which she intends to use to teach poetry and fiction workshops to students. Jones is hoping to reach out to Desert Island Supply Co. (DISCO) and Birmingham area schools, as well as schools in her mother’s hometown of Greensboro.

“I think the fact that you have some sort of talent, that requires you to give that back to someone, I do that through working with children,” says Jones.

“Often in the literary world, people don’t value political poetry, and that’s kind of what I do history, politics,” Jones says. “Often people will say, ‘Oh that’s not what we do, we’re just here to play with language.’ But I think you don’t have to be one or the other, you can be serious about your language and craft of writing but you can also say something with your poems.”

Jones not only wants to help young writers find their voice, she’s also focused on empowering women. “Because I’m a feminist. I’m all for the girls being able to do whatever they want to do,” says Jones. “So it means a lot that they would value me as an important female writer.” “The fact that the [Rona Jaffe Foundation] is focusing on empowering women is a really big deal to me.”

As for her own career, Jones has recently returned to Birmingham from pursuing her M.F.A. in Florida and is teaching Creative Writing at ASFA.

“I’ve been in the city for forever, and all I’ve ever known is Birmingham.,” she says.“Sometimes when you are from somewhere, you kinda think, ‘Oh okay it's just Birmingham,’ but once I left,  I realized, ‘Wait a minute, Birmingham is everything I’ve ever wanted in a city.’”

Jones says her experience at UAB was transformative.  “UAB opened me up as a person because I used to be really shy when I was in high school, and when I came here I decided to do everything, and that really enriched me as a person and made me who I am today.”

Jones is the second alumna to win the Rona Jaffe Award in recent years. In 2012, UAB English professor and alumna Lauren Slaughter won the award.

“I’m both surprised and not surprised,” says Dr. Alison Chapman, chair of the Department of English.  “This is a major national award, so you never expect to have this kind of success. On the other hand, we have such a great program with such great people and so at some level you half-expect good things to happen. When I heard the news about Ashley I thought both ‘Wow!’ and ‘Of course!’”
Sarah Buckelew is a UAB Digital Media Fellow who is in the process of creating an IDM in Documentary Film Studies. She also works in writing and is always looking to gain new media skills.