Cahaba Brewing is one of the most popular and successful breweries in Birmingham. “When I began brewing, I started looking at what the science of brewing is,” says Eric. “A lot of people relate brewing beer more to cooking than anything else, but there’s so much more to it.

In 1996, Huntsville-native Eric Meyer arrived at UAB with his sights set on a career in medicine. Like any good pre-health track student would do, he registered as a biology major and started on the path to medical school. In the Biology Department, he was introduced to professors who broadened his experiences and introduced him to new ways of thinking. Dr. Dan Jones and Dr. Ken Marion shared their love of botany and wildlife with Eric and included him in field research studies.

“As a young person, you just have to hold on and be ready to grab hold of small bits of what Dr. Marion has to offer,” Eric says. 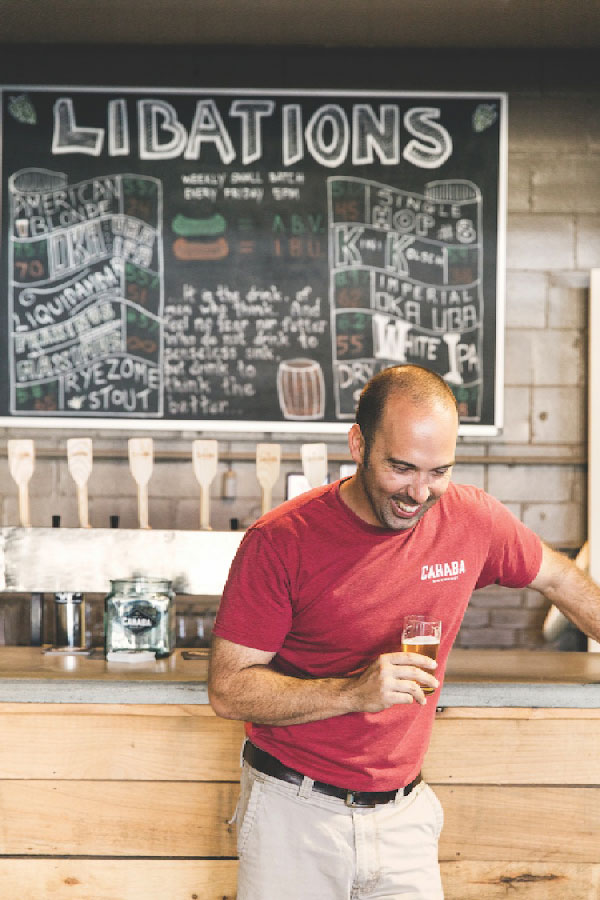 Photo credit: Cary Norton.By his junior year, Eric had a change of heart. Over the past two years, he had fostered his passion for the environment, botany, and natural sciences and had developed a curiosity in geographic information systems (GIS). With dwindling interest in medical school, Eric worked with his academic advisor to create an Individually Designed major with a minor in Biology. This new course of study landed him an internship with the Jefferson County Storm Water Management Authority canoeing and hiking the Cahaba River while mapping the entire river with GPS. Eric graduated in 2001 and continued his GIS work with Jefferson County while completing Emergency Medical Technician classes at UAB to be a firefighter. For the past 16 years, Eric has worked as a full-time firefighter in the city of Mountain Brook.

When he wasn’t at the firehouse, Eric spent his downtime experimenting with home beer brewing. After years of refining his craft, he and a group of friends devised a plan to open a brewery. In 2011, Cahaba Brewing Company was born. Eight years in, and Cahaba Brewing is one of the most popular and successful breweries in Birmingham. At Cahaba, Eric is able to put his scientific background to good use.

“When I began brewing, I started looking at what the science of brewing is,” says Eric. “A lot of people relate brewing beer more to cooking than anything else, but there’s so much more to it. Any little change [in ingredients or process] can alter the beer’s flavor and appearance.”

He relies on research methods honed during his years at UAB to improve upon the production process and create a clean and consistent product.

Though Eric’s two full-time jobs and family life keep him busy, he has continued to stay active in the UAB community. Over the past couple of years, he has collaborated on beer-related grant proposals and research with Dr. Jeff Morris, Microbiologist and Assistant Professor of Biology, and Elliott Greene, a recent graduate of the Department of Biology. Elliott now works in Cahaba’s lab running tests on beer to search for wild yeast and bacteria that can harm their product.

In 2015, Eric was recognized by the UAB National Alumni Society as a member of the UAB Excellence in Business Top 25 class. In 2017, he was honored with the College of Arts and Sciences’ (CAS) Distinguished Young Alumni Award, and he is a current member of the UAB CAS Alumni Board. Eric also regularly provides a lending ear and mentorship to UAB undergraduate students aspiring to be entrepreneurs and scientists.

In addition to supporting UAB, Eric supports the greater Birmingham community by donating a portion of Cahaba’s proceeds to local charities and organizations during their ‘Goodwill Wednesdays’ and other special events. Eric appreciates the support and foundation he received as a UAB undergraduate student, and now he’s doing his part to pay it forward and help his community.