I Am Arts and Sciences: Ellyn Grady

As Ellyn Grady embraces retirement and looks back on her storied career, she does not call attention to her impressive and incomparable fundraising achievements. Instead, she reflects on and celebrates the people with whom she connected, learned from, and worked alongside over the course of her 30 years in Birmingham. 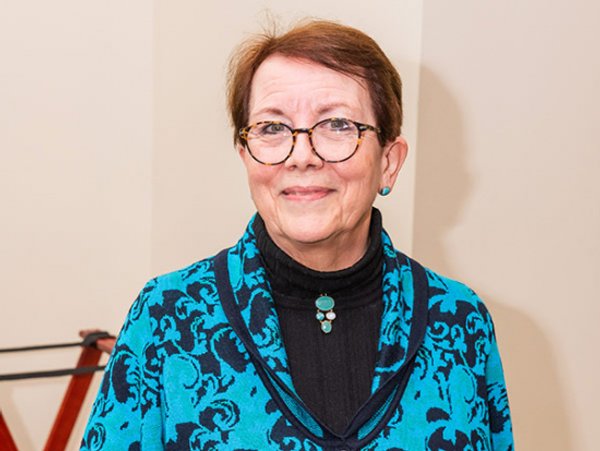 As Ellyn Grady embraces retirement and looks back on her storied career, she does not call attention to her impressive and incomparable fundraising achievements. Instead, she reflects on and celebrates the people with whom she connected, learned from, and worked alongside over the course of her 30 years in Birmingham.

For Grady, the decision to pursue her master's degree emerged after an early career in community education in Fairfax County, Virginia. She learned a lot from her time as an educator, and, during that period, she uncovered a clear passion for the administrative side of the work.

So, when her husband told her about an opportunity to move to Birmingham, she offered an appropriate caveat. “I said, ‘Look, if I’m going to go to Birmingham, Alabama, I want to get my master's degree,'” said Grady.

And that’s exactly what she did. After an inspiring conversation with Dr. Mary Ellen Guy (former chair of the Department of Political Science and Public Administration), Grady decided to earn her MPA. And, as she has done with everything in her life, Grady dove into the experience head first and quickly developed lifelong friendships with her professors and fellow students.

“Who you meet at UAB inspires you to learn more," said Grady. "I tell my students, ‘It’s the people in these seats who will be your network throughout the rest of your life and career.'"

Grady earned her MPA in 1992, and, soon after graduation, she was hired to serve as executive director for Girls Inc. of Central Alabama. Girls Inc. is a nonprofit organization that offers programming that equips girls to navigate gender, economic, and social barriers, and grow up healthy, educated, and independent. When Grady started leading the organization, she briefly wondered if she was ready for the responsibility.

Thankfully, Grady's uncertainty waned quickly, and she began to leverage the critical thinking and problem-solving skills she built during her time in the MPA program. "UAB gave me the starter set. It gave me the confidence to walk through the door and make one decision after another," said Grady.

She successfully led Girls, Inc. for seven years, then pivoted to a career with the United Way of Central Alabama (UWCA). While serving as Senior Vice President of Agency Impact at the UWCA, Grady brought a transformational mindset to her role in development. She found success by focusing less on the dollars and more on the people.

"It wasn’t really about raising money," said Grady. "It was about raising awareness and matching donors with community needs, so they could make a difference. I had a front-row seat to the generosity of this community."

Grady eventually became Senior Vice President of United Way of Central Alabama’s Resource Development Department and retired in 2019. Today, as a practitioner teaching for the MPA program, she continues to impart her knowledge and wisdom on UAB students.

When mentoring students who are making plans for the future, she offers thoughtful advice that is rooted in service and her love for the City of Birmingham. Regardless of her students' career plans, she encourages all of them to serve on nonprofit boards and advisory boards.

"The service side of the College of Arts and Sciences is the heart of the university," said Grady.