Uncovering the power of human rights

While growing up in Birmingham, Katie Fagan lived a few blocks away from the University of Alabama at Birmingham. Although both of her parents graduated from UAB’s School of Medicine, attending the university was not part of Fagan’s long-term plan. At least not at first. 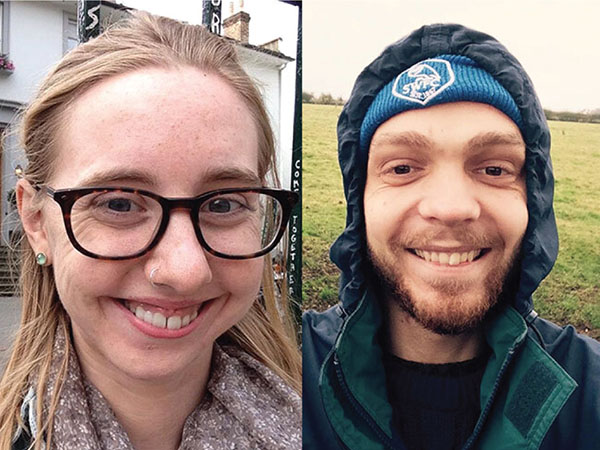 While growing up in Birmingham, Katie Fagan lived a few blocks away from the University of Alabama at Birmingham. Although both of her parents graduated from UAB’s School of Medicine, attending the university was not part of Fagan’s long-term plan. At least not at first.

Fagan’s academic journey helped her achieve that desired distance. After studying sociology at Hendrix College in Conway, Arkansas, she made her way across the Atlantic Ocean to the University of Manchester where she earned her Master of Science in Environmental Governance. That’s also where she met Elliot Nicholson-Cox.

Fagan and Nicholson-Cox connected quickly and uncovered a shared interest in human rights and peace studies. Nicholson-Cox, an alumnus of the University of Bradford’s Peace and Development Studies program, was teaching full-time and planning his next academic step. While crafting his vision for the future and exploring his evolving interest in anthropology, he decided to visit Fagan while she was back in Birmingham spending time with her family.

During his trip to Birmingham, Nicholson-Cox was determined to meet Douglas P. Fry, Ph.D., a prominent anthropologist and former chair of the UAB Department of Anthropology.

“Dr. Fry was instrumental in establishing the Anthropology of Peace and Human Rights program [at UAB],” said Nicholson-Cox. “We chatted and stayed in touch, and he invited me to apply for the program.”

Nicholson-Cox followed Fry’s recommendation and was accepted into the graduate program. Fagan also started exploring the possibility of returning home, given her burgeoning relationship with Nicholson-Cox and deepening interest in peace studies.

“All of my research led me to focus on issues of justice and environmental justice,” said Fagan. “I had been around Elliot and his friends who had all done peace studies in undergrad and had been immersed in it. I thought it [UAB’s Anthropology of Peace and Human Rights graduate program] was another master’s that would really help push my research.”

Within a year, both Nicholson-Cox and Fagan had moved from England to Alabama and enrolled in the APHR program. Although they shared several foundational classes, they uncovered their own specific interests within the program.

Fagan embraced her return to Alabama and sought opportunities to ground her research and work in her home state through interdisciplinary courses in public policy and public health and internship opportunities with the Jefferson County Memorial Project and the Institute for Human Rights. As Fagan developed her Birmingham network and continued to refine her focus on public participation in environmental justice cases (with a focus on clean water issues in North Birmingham), Nicholson-Cox found ways to pursue his specific interest in the ways education systems work in relation to peace and conflict in local communities.

“Katie was able to spend lots of time doing research that was specific to Birmingham,” said Nicholson-Cox. “While I was doing more classically academic work.”

Both Nicholson-Cox and Fagan graduated from the APHR program in 2020, and, now, their specific interests are informing their respective post-graduation paths. At the moment, Nicholson-Cox is exploring Ph.D. programs that will allow him to further build on his master’s thesis, which focuses on the way education was used as a tool of colonial Spain in Mexico from the 16th century up to today. He will also teach the Intro to Peace Studies course at UAB in Fall 2021.

Fagan, on the other hand, is working with the Black Warrior Riverkeeper and serving on junior boards for both the Birmingham Botanical Gardens and the Alabama Rivers Alliance. Throughout her daily work and volunteer activities, Fagan draws on her knowledge and skills from the APHR program, including conflict resolution and conflict transformation.

“I’m still using all of my research. [The APHR program] is very multidisciplinary,” said Fagan. “I’m currently on junior boards for the Botanical Gardens and the Alabama Rivers Alliance and discussions about equity and justice are definitely a part of that work. I’ve been able to bring a lot of theories from the program out to these groups, which has really helped me.”

According to Peter Verbeek, Ph.D., associate professor and program director in the Department of Anthropology, both students made a lasting impact on the APHR program. “Access to a healthy and sustainable environment and to age-appropriate education are not privileges but rights that are integral to the basic human rights framework that much of the world has pledged to uphold,” said Verbeek. “Katie Fagan and Elliott Nicholson-Cox, two distinguished alumni of the APHR program, have dedicated much of their work in APHR on studying these basic rights and how working to advance them equals working for positive peace. Their contributions to APHR have been multifold and much appreciated, and all of us in the UAB Department of Anthropology have great expectations for their future careers as scholars and activists of peace.”

It’s clear that both Fagan and Nicholson-Cox will carry their knowledge and networks with them throughout their careers and future academic pursuits. It’s also clear that the APHR program profoundly influenced the ways in which both alumni see the world.

When prompted to reflect on and consider the importance of the APHR program and human rights education more broadly, Nicholson-Cox offered a powerful insight: “Rather than talking about abstract political ideas… using human rights as a frame grounds everything in human needs that just makes sense to people. We all have a right to a safe and clean house, good food, drinking water, to have our voice heard when we choose to speak. These are all very common-sense ideas that people have for what would make a just and peaceful society.”

Fagan agrees. “It’s collaborative. Peace is a lot more holistic and something to reach for than I think people realize. It impacts everything. There’s nothing outside of the discussion of peace and human rights,” said Fagan.