I am Arts and Sciences: Kristin Powell

Sometimes, people find themselves pursuing unexpected career pathways. According to Kristin Powell, Ph.D., organizational consultant for Blankenship & Seay Consulting Group, the knowledge and skills she attained while studying in the University of Alabama at Birmingham’s Department of Psychology prepared her for any career — regardless of the field or subject matter.

Sometimes, people find themselves pursuing unexpected career pathways. According to Kristin Powell, Ph.D., organizational consultant for Blankenship & Seay Consulting Group, the knowledge and skills she attained while studying in the University of Alabama at Birmingham’s Department of Psychology prepared her for any career — regardless of the field or subject matter.

“I got my foundation at UAB,” said Powell. “I have the basic skills that I needed to be successful in any role. That can give you a lot of confidence.”

Powell began building her skills (and confidence) in her hometown, Montgomery, Alabama. After graduating from St. Jude Educational Institute, she decided to pursue a bachelor’s in psychology at Auburn University at Montgomery and earned her degree in 2000. Throughout her formative years, Powell nurtured a connection with the city of Birmingham and, subsequently, UAB.

“Growing up in Montgomery, coming to Birmingham was like coming to the big city,” said Powell. “When I became older, I learned more about the training that goes on at UAB and the medical community, which is a large part of the university... Also, my father received medical treatment at the Kirklin Clinic.” 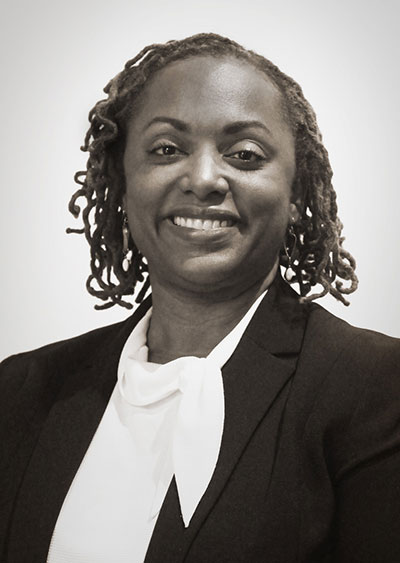 Kristin Powell, Ph.D.Powell witnessed the extraordinary care her father received at The Kirklin Clinic of UAB Hospital, which inspired her to consider pursuing her doctorate in psychology at UAB. Through the university’s Department of Psychology, she saw an opportunity to nurture a research foundation while also attaining a clinical education.

“I was interested in learning about… the health psychology aspect of mental health,” said Powell.

Although she applied for numerous graduate programs across the country, UAB was at the top of her list. Soon after applying to UAB, Powell was accepted into the Ph.D. program, and she received a Comprehensive Minority Faculty and Student Development Fellowship. According to Powell, the fellowship was a game-changer.

“It afforded me the opportunity to study without having the financial worries of how I was going to fund my doctoral education,” said Powell.

She thrived in the program and was mentored by Jesse B. Milby, Ph.D., Professor Emeritus of the Department of Psychology. “I always felt very welcomed by him,” said Powell.

After she earned her Ph.D. in Clinical/Medical Psychology from UAB in 2006, Powell moved to Boston and participated in a year-long post-doctoral fellowship with the National Center for PTSD. After completing her fellowship and working in Boston for three years, Powell started a position with the Tuscaloosa Veterans Affairs (VA) Medical Center where she worked in a training director and PTSD team lead role and later transferred to the Birmingham VA Medical Center. Powell spent the last four years of her 14-year VA career as a national program manager, responsible for leading a team that developed and implemented programs and initiatives supported by VA Central Office.

“I helped lead and coordinate a national evidence-based mental health training program for the entire VA,” said Powell. “It really extended my reach. People would come back to me and say, ‘What your training program taught me to do helped me to make a difference in someone else’s life.’”

Powell made a profound impact during her time at the VA — that said, after a decade-and-a-half in her role, she decided to make a significant career pivot. She leaned on her transportable skills — specifically in assessment, communication, relationship-building, and problem-solving — and moved to a role in the private sector with Blankenship & Seay Consulting Group, a consultancy that delivers assessment-based psychological consulting services to companies.

Powell is enjoying her new career as an organizational consultant, through which she helps employees and leaders develop their essential skills. Moving forward, she aims to encourage future alumni of the College of Arts and Sciences to celebrate opportunities to pursue unexpected career pathways and leverage their talents across sectors. “Don’t let anything limit you,” said Powell. “Don’t let anything box you in.”