I am Arts and Sciences: Rosie O’Beirne

Pursuing what you love doing can lead you in unlikely directions in your career.

For Rosie O’Beirne, her background in anthropology informs her work as University of Alabama at Birmingham’s chief digital strategy and marketing officer every day—a somewhat surprising (and valuable) connection.

Pursuing what you love doing can lead you in unlikely directions in your career.

For Rosie O’Beirne, her background in anthropology informs her work as University of Alabama at Birmingham’s chief digital strategy and marketing officer every day—a somewhat surprising (and valuable) connection. 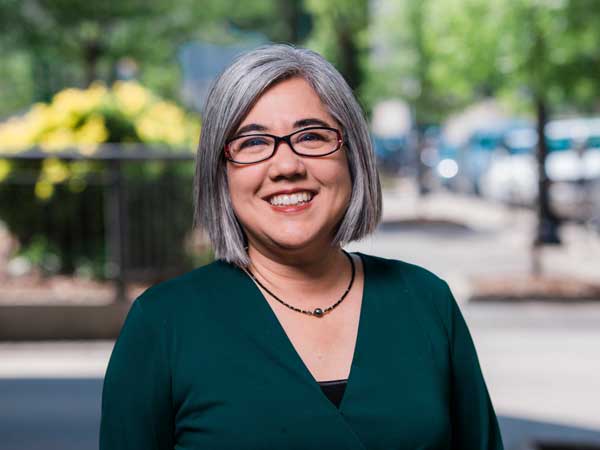 Rosie O’BeirneO’Beirne always knew she would go to college. According to O’Beirne, coming from a multicultural household—her parents are from Japan and Southern America—higher education was not a question. “Culturally, education is… so important in Japanese culture, so all my life I knew I was going to go to college,” said O’Beirne. She describes UAB as a place where “you could work and hold a job. Scrappy people came to UAB.” She wanted to be a part of this environment of like-minded individuals and get her foot in the door—that said, she had no idea what she was going to study.

When O’Beirne was sitting in one of her first college classrooms listening to Dr. Bruce Wheatley—a professor in the Department of Anthropology at the time—discuss his discipline, everything clicked. “Everything this professor is talking about relates to my upbringing, to growing up in a multicultural household,” said O’Beirne. “Everything, suddenly, about me growing up in this home, made sense sitting in the Intro to Cultural Anthropology class.”

That moment inspired O’Beirne to declare anthropology as her major, and she went on to earn both her B.A. and M.A. (through a joint program with UAB and the University of Alabama) in the discipline.

She still uses the skills she honed and developed in the College of Arts and Sciences—including a keen understanding of cultural relativism—in her current role. “I am an anthropologist by training and a marketer by trade,” says O’Beirne. “In my job as a marketer, I use the anthropology toolkit every day… seeing the world through other people’s eyes or walking the world in someone else’s shoes. [U]nderstanding the diversity of [UAB’s] student body and the diversity of needs is critical.”

After receiving her M.A., O’Beirne worked as the co-director of the Media Studies Program at UAB, alongside colleague Michele Forman. The duo created the Media Lab, which gave students access to professional-grade technology to create media. Through the lab, O’Beirne also created the innovative Digital Media Fellows program. The program acted as a creative agency staffed by 12 UAB students who created original digital storytelling content for clients ranging from UAB academic departments to nonprofits in the Birmingham community. Media Fellows gave students work experience before graduating, which allowed most of the students to be hired soon after their graduation.

“This program acted almost as an apprenticeship where we were able to pay students and give them work. These students were getting hired right out of the gate… there were employers that wanted them,” said O’Beirne.

“Long-story short, I’m running marketing for the university. Many of the thoughts and skills I learned as an anthropology student are translatable to the marketing industry. It is also why I enjoy promoting the value of a liberal arts education. A good college education prepares you to think—no matter the industry. And that’s what I received at UAB,” said O’Beirne.

She views her career path as atypical, and, as a result, she encourages students to explore their options during their college career. “What do you love doing? [I]f you can figure out how to tap into things you love doing and translate that over into a career, then you win. The best is when you like what you’re doing,” said O’Beirne.