He has plenty more stories where those came from, and soon he will share them with thousands of listeners thanks to an oral history project from UAB and Red Mountain Park, a new, 1,108-acre preserve covering much of the former mining lands. Launched in 2009, the ongoing initiative is collecting the accounts of people who lived and worked on the mountain when it was Birmingham’s industrial epicenter.

UAB faculty member Rosie O’Beirne says the oral recollections are important additions to the region’s historical record. “The stories of everyday life provide interesting nuances to Birmingham’s grand narrative of an iron and steel city,” she says. “They describe communities and neighborhoods that don’t exist anymore.” Because Birmingham became one of America’s top iron and steel producers — and played a vital role in producing materials for defense efforts in World War II — these stories have national relevance as well. 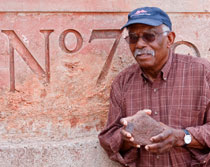 Red Mountain Park turned to O’Beirne, co-director of the Digital Community Studies (DCS) program in the UAB Department of History, and UAB history instructor Pamela Sterne King because they are adept at bringing Birmingham’s stories to life. King had already written a history of the Red Mountain mining community. O’Beirne is an applied anthropologist who works with digital media. “In DCS, we use multimedia and documentary filmmaking as a vehicle for storytelling and community empowerment,” she says. “Our work dovetails perfectly with the project’s objectives.”

View a slideshow of images from the project at UAB Magazine.

Men with a Badge

To date, the Oral History Project — involving O’Beirne, King, UAB students, and Red Mountain Park staff — has conducted and filmed more than 20 interviews (watch a rough cut of those interviews here). Most take place in the homes of retired employees of U.S. Steel, which operated the mines — and the mining camps, the self-contained towns on the mountain slopes. Many of these men did “the physically hard stuff underground,” King says; some worked in management. But whether they were laborers, surveyors, foremen, lift operators, geologists, or even mule keepers, all have provided a wealth of details about their jobs, and their memories remain sharp. “Many of the men remember their company badge number by heart, even though they haven’t worked for years,” O’Beirne notes. Badge numbers, it turns out, were the key to life in the camps, enabling each worker to tally his hours, receive a paycheck, and purchase goods at the company store. 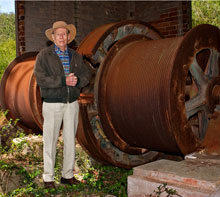 James Goodson stands at the Redding Shaft Mine, not far from the site of the Woodward Iron camp where he was born. Photo: Eric McFerrin/Red Mountain Park. There’s no question that it was a tough, dirty, dangerous work environment. And the prevailing social and cultural environment made it harder. “I’m interested in how segregation worked,” King says. “Any miner I’ve ever heard — white or black — will say that the racial divide disappeared underground. It’s sort of like being in battle; they watched each other’s backs. But when they came out of the mine, the separate worlds reappeared.” African-American workers were barred from higher-paying management jobs, and they lived in separate camps from white workers, King says.

Still, “it was the type of work that people were grateful to have at that time,” O’Beirne says. “A company job translated to security.” It also meant good pay, an attractive lure for poor white and African-American men from rural areas. Many workers also enjoyed the benefits of living in the camps, with company-provided housing, health care, educational opportunities, and community activities. “I was quite surprised to hear both blacks and whites say that company towns were the best place to grow up,” O’Beirne says. “Many people have described tightly knit communities where everyone knew each other and raised each other’s children.”

“They had a lot more benefits than many of their peers,” King adds, noting that many of the workers remain very loyal to the company, despite decades of retirement. And though their own company did not encourage them to join, they also credit labor unions for enabling many of the advantages they enjoyed — a surprise to King, who did not expect to hear that from politically conservative white workers.

King and O’Beirne also talked with women — wives and daughters of the miners — to learn about life in the mining camps. Their responses were more lively than the men’s, King says. “They told all kinds of great stories — how they went on dates and how they handled pregnancy in the camps. It was fun. They all said they didn’t work. Of course, I knew that wasn’t true. They worked very hard managing their homes and also would do washing and other things for white families.”

The interviews usually last one to two hours — not enough time to capture all the stories people have, O’Beirne says. “No one is reluctant to talk. People have responded emotionally, gratified that their story is being preserved. They talk about the importance of letting future generations know about the iron industry and highlighting the people who made it a success.”

Interacting with the Past 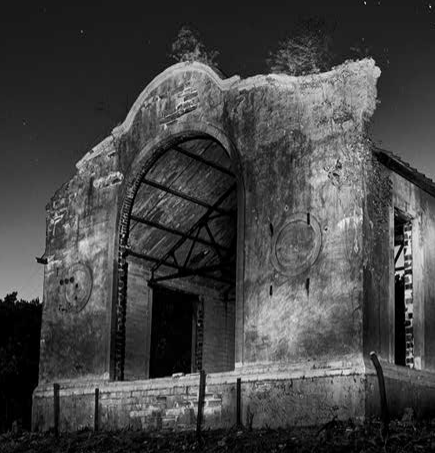 Entrance of the Redding Hoist House, one of several remaining structures in park boundaries. This summer, UAB students Craig Wooten and Thomas Cleveland participated in the project by conducting their own interviews through a history internship. And this fall, O’Beirne is leading a Community Ethnography course that will give undergraduates a role in filming, editing, and shaping the oral histories. The goal is to create video-based exhibits for Red Mountain Park’s future museum; the interview transcripts also will be shared with UAB’s Mervyn Sterne Library, which already houses an extensive oral history collection.

O’Beirne and King hope that these completed oral histories will be the first of many. “This generation is aging, and there’s a pressing feeling of needing to document as many people as possible, as soon as possible,” O’Beirne says. “History is in the mind of the beholder,” King adds. “Insights and memories of the same thing will be different from person to person.” Anyone interested in sharing a story should contact Red Mountain Park to set up an interview.

“These were dirty, working-class, and largely African-American professions, so they haven’t received credit for their role in the city’s growth like bankers and developers have,” notes King, who now serves on the Red Mountain Park history committee. “These oral histories provide a richness of personal experience like nothing else. They offer a chance to interact with history where it happened.”