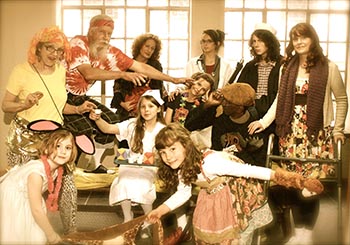 “A Will Not His Own” tells the fictional story of Will, a man with dementia and his struggle to maintain his memory while accepting its loss. The play was crafted from a collection of interviews captured by UAB students during visits with the elderly at South Highland Day Center. The event will take place at 7 p.m. May 31 and 2 p.m. and 7 p.m. June 1 at South Highland Presbyterian Church, 2035 Highland Ave South. Tickets are $7 for students and children, $10 for adults, and are available for purchase at the door.

The play was birthed from The Imaginarium Chronicles, a service-learning initiative funded by the College of Arts and Sciences and led by assistant professor of English Nichole Lariscy to tell community stories.

“UAB is excited about service learning,” Lariscy said. “Students are learning about what is affecting their community now.”

For the South Highlands Day Center project, students brought in pictures of people in interesting places and asked participants what the images meant to them. The goal was to learn about connections between memory and the arts.

“At first, they were really quiet,” said 20-year-old senior Kaylyn Alexander from Pelham. Then, she said, they began to open up, slowly but surely.

“It was like a sensory stimulant for them,” said the English literature and public relations double major. “When they started talking, it affected their physical gestures.”

Residents who were normally quiet and reserved became chatty and excited. Some had never shared anything about themselves to their peers but were opening up and sharing their life stories.

Those stories were made into a play that was written by Lariscy and Rachel King-Barr, director of children’s ministry for South Highland Presbyterian Church, with hopes the audience will leave reminded of the need for dementia care for the aging population. “Everyone needs to think carefully of their elders and what steps they’re going to take,” Lariscy said.

Two additional projects of the The Imaginarium Chronicles are in the works: one to tell stories collected from the UAB 1917 Clinic for HIV, and another to present the tales from students at Birmingham’s Woodlawn High School.