If you could meet the person who made your scholarship possible, what would you say? Over 175 students had that opportunity last Friday as the College celebrated the 2015-2016 Scholarship and Awards Luncheon.

If you could meet the person who made your scholarship possible, what would you say? Over 175 students had that opportunity last Friday as the College celebrated the 2015-2016 Scholarship and Awards Luncheon. Donors and scholarship recipients came together, many for the first time, to get to know each other and recognize the accomplishments of some of the College’s finest. It was a fun and memorable afternoon reminding all attendees how lives are transformed by scholarship support. 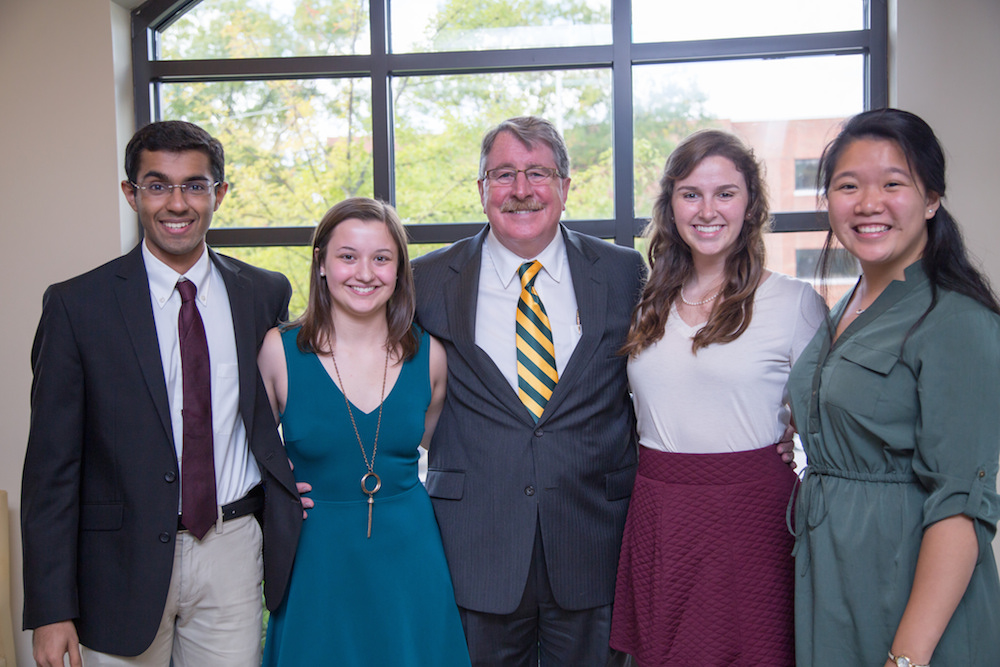 Dean Robert E. Palazzo with students. From left to right: Hriday Bhambhvani, Ally Middleton, Dean Palazzo, Savannah Russell, Aileen Jong. (Photos by Jared Bash)The event also offered attendees a first-hand look at the breadth of the talent within the College. The Digital Media team produced a video featuring donors and recipients meeting for the first time to play a game of “Pop the Question." The UAB Gospel Choir closed the event with a truly moving performance.

In addition, the College recognized four newly established endowed scholarships during this year’s program. The endowments created this year have been established in honor of two of the College’s current faculty members and one former faculty member. The Steve A. Watts Endowed Support Fund was established in the Department of Biology by Drs. Dan and Karla Bishop, and the W. Ronald Clemmons Endowed Music Scholarship was created in the Department of Music by an anonymous donor. Lastly, two endowments in the Department of English were made possible by the generous gifts from the estate of a beloved former faculty member. Endowments such as these serve as not only a permanent legacy to the generosity of their creators, but also as a testament to the unwavering belief in our students.

As UAB’s largest academic unit, home to more than 7,000 undergraduate and graduate students, the College honored its scholarship recipients with awards totaling more than $200,000. With their gifts, our supporters are allowing our students to fully immerse themselves in their academic pursuits and pursue the programs that will ensure a bright future.

College of Arts and Sciences Scholarships

The God at the Speed of Light Endowed Scholarship

Department of Art and Art History

Dr. Klaus Urban Endowed Scholarship for the Department of Art and Art History

Department of Computer and Information Sciences