An Evening with James Meredith

by CAS News
Phi Alpha Theta presents "An Evening with James Meredith." Join the roundtable discussion recounting the 1962 integration of the University of Mississippi. 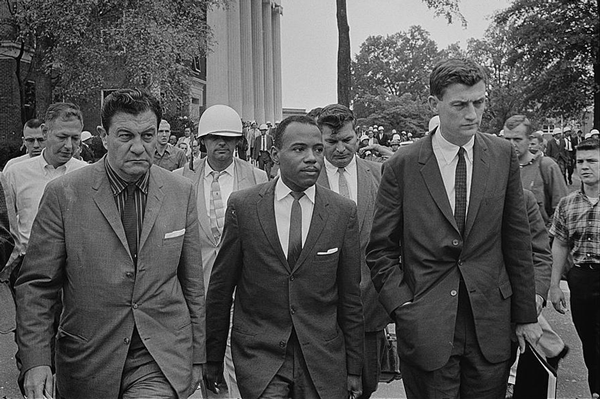 James Meredith walking to class accompanied by US marshals. Image courtesy of the US Library of Congress. You are invited to "An Evening with James Meredith," a roundtable discussion recounting the 1962 integration of the University of Mississippi. Join us on February 12 at 6:00 p.m. in the Hill Student Center Ballroom.

In 1961 Meredith applied to the all-white University of Mississippi. He was admitted, but once his race was discovered his admission was withdrawn. Meredith filed a suit alleging discrimination and won when the US Supreme Court ruled in his favor. When he first attempted to register for classes on September 20, 1962, he found the entrance blocked. Attorney General Robert Kennedy and President John F. Kennedy sent US Marshals, military police, the Mississippi National Guard, and officials from the US Border Patrol to deal with rioting that broke out. Meredith became the first black student to enroll at the University of Mississippi on October 1, 1962.

This roundtable is sponsored by the Department of History, the African American Studies Program, Phi Alpha Theta, and Student Multicultural & Diversity Programs.