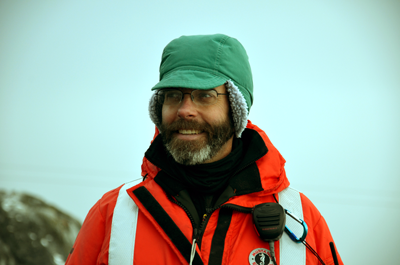 Dr. Amsler’s love for marine ecosystems started at an early age. He grew up along the shore of Lake Erie and traveled with his family to the Carolina coast every year. As a child, he knew he wanted to be a marine biologist. As a college student, he narrowed his focus to the study of marine macroalgae—a concentration that has continued today.

Dr. Amsler joined the UAB Department of Biology as an Assistant Professor in 1994. He received his B.A. from Duke University in 1980 and his M.S. from the University of North Carolina at Wilmington in 1983. He completed his Ph.D. at the University of California at Santa Barbara in 1989, where he also served as an assistant research biologist. Immediately prior to joining the faculty at UAB, he worked as a postdoctoral research associate at the University of Illinois at Chicago from 1990-1994.

Since coming to UAB, Dr. Amsler has focused much of his research on the chemical ecology of organisms in Antarctic marine communities, an emphasis he began as a graduate student at UC Santa Barbara. While his research is focused on several areas, most of his work involves chemical interactions between organisms or ways in which organisms perceive, respond to, or otherwise interact with their chemical environments. Dr. Amsler has recently expanded this work into understanding the impacts of ocean acidification and other climate change factors on marine organisms.

In addition, Dr. Amsler’s laboratory studies algal ecophysiology, often beginning with quantitative studies of the biochemistry, physiology, or swimming behavior of single cells. “These algal studies start with the cell and focus in large part on physiological and behavioral adaptations to the microenvironments of the biofilm and planktonic communities,” he explains. “[We examine the] influence of nutrient and other chemical gradients on the swimming and settlement behavior of algal spores.”

Dr. Amsler and his wife Margaret, along with colleagues and graduate students from the Department of Biology, regularly travel to Palmer Station, one of three U.S. permanent research facilities in Antarctica that are maintained by the National Science Foundation. There, Dr. Amsler is able to examine the ecological changes to macroalgae and other marine species in the warming waters of the polar region. As a leader of the UAB in Antarctica program, Dr. Amsler has helped elevate the profile of marine biology here at UAB, and make important advancements in a field that has had a broad scientific impact.

Dr. Amsler’s impact is also evident in teaching and service. His students consistently review his courses as some of the best and most informative they’ve taken at UAB. He has mentored a number of undergraduates whose work has been published in peer-reviewed Journals. He’s also invested heavily in his graduate students as they produce their own research and scholarship; many of these students have been recognized with awards and honors and all have gone on to successful careers in their fields.

He has spent countless hours establishing a platform for the UAB Antarctica program, including award-winning web sites, videos and other tools. Through these mechanisms, UAB has been able to reach a broad national and global audience, as well as important local audiences such as Alabama high school students and educators.

In 2007, the U.S. Board of Geographic Names designated “Amsler Island” in Antarctica. In early 2015, the journal “Phycologia” announced that the algae species from Antarctica previously known as Delesseria lancifolia, will now be called Paraglossum amsleri (Delesseriaceae, Rhodophyta) in Dr. Amsler’s honor.