by CAS News
Alejandro Tapia y Rivera (1826–1882) is widely considered to the father of Puerto Rican literature. Maddox's translation of La Cuarterona provides a new window into the literary contribution of Tapia and the cultural heritage of Puerto Rico. 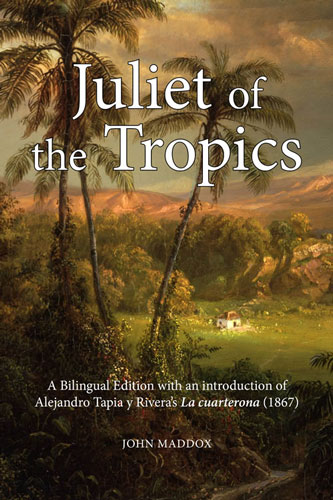 Professor John Maddox of the Department of Foreign Languages and Literatures, has translated Tapia's 1867 play, initially titled La cuarterona. It is a love story about young, forbidden lovers in slave-based Cuba. Theater was the genre Tapia most cultivated, yet until now none of his plays (and only two of his other works) has been translated into English. The translation of such important works is pivotal because it facilitates communication across cultures and cultivates interest in the traditions of other, and it provides a new window into the literary contribution of Don Alejandro Tapia y Rivera and the cultural heritage of Puerto Rico.

This first translation with a critical introduction and an exhaustive bibliography on Tapia, is a useful contribution to the study of drama, African slavery and its abolition, Hispanic literature and culture, Puerto Rican studies, women’s studies, colonial and post-colonial studies, human rights, and the history of the Atlantic World. You can learn more about Maddox's translation and about Alejandro Tapia y Rivera on the publisher's website.