It’s often said that a journey of a thousand miles begins with a single step. But Dean Robert Palazzo’s 1,099-mile journey from the Rensselaer Polytechnic Institute in Troy, New York, to UAB’s College of Arts and Sciences actually started with a surf clam. 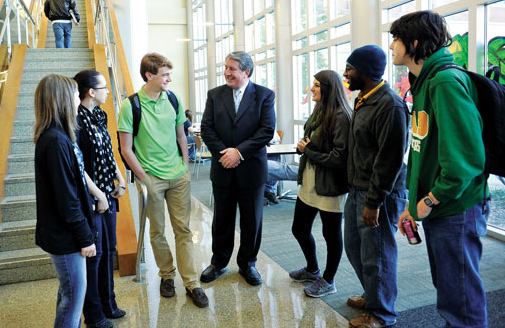 It’s often said that a journey of a thousand miles begins with a single step. But Dean Robert Palazzo’s 1,099-mile journey from the Rensselaer Polytechnic Institute in Troy, New York, to UAB’s College of Arts and Sciences actually started with a surf clam.

His journey to the surf clam began while studying cell biology, when he became intrigued by a cell component known as the centrosome. Not to be confused with its more famous neighbor the nucleus, the centrosome acts as sort of primary organizing center for cell division and had been described and named by German biologist Theodor Boveri in 1888. “Boveri pretty much formulated the chromosomal theory of inheritance,” Palazzo says. “He predicted that chromatic bodies observed by early cytologists were the carriers of genetic information and traits. Then a hundred years passed, which saw the discovery of DNA and a revolution in molecular biology. Yet, when it came to one of the most important organelles in a cell, scientists still had a basic lack of understanding.”

Palazzo, then a scientist at the Marine Biological Laboratory in Woods Hole, Massachusetts, set out to help fill that void in knowledge about centrosomes. As it turns out, the eggs of marine organisms are excellent specimens for observing cell division — and the clam maybe best of all. Clam eggs divide rapidly, and their contents show up well under a microscope. Fortunately, the shore near Palazzo’s lab was teeming with excellent clams, so picking up a few bushels of clams a day for scientific use was no problem.

Fast-forward to the February 1992 issue of the journal Science, which featured Palazzo’s work as its cover story in, Palazzo R.E., E. Viasberg, R.W. Cole, and C.L. Rieder (1992) Centriole duplication in cell-free lysates of Spisula solidissima. Science. 256: 219-221. The scientific world took notice, and in the ensuing years, a series of international conferences brought together some of the leading minds in related fields to exchange ideas on progress in centrosome research.

One of the leading minds in the field was a cell biologist named William Brinkley, Ph.D., a president of the American Society for Cell Biology, the Federation of Societies for Experimental Biology, and a professor and former chair at UAB School of Medicine. Brinkley connected Palazzo to UAB early in Palazzo’s career. 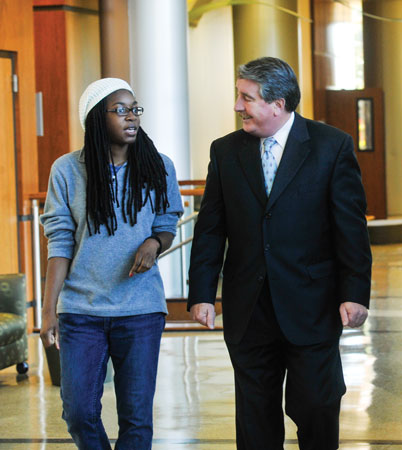 A favorite part of Dean Robert Palazzo’s job as dean of the College of Arts and Sciences is interacting with students.Having been recruited as interim dean of the UAB College of Arts and Sciences in October 2012, Palazzo was named dean last June. Although his office, desk, and chair are the same, he says the mindset of dean-versus-interim is very different. “When you’re an interim, you want to do as much as you can,” he says, “but you have to be careful that your decisions don’t have long-term ramifications, because another person will follow you and develop a new relationship with the faculty and others they represent. When the commitment’s made to become dean, you can be more long-term in your thinking and helping to guide things.”

Birmingham by Way of Italy

Palazzo’s perspective on that process is shaped by a somewhat unusual upbringing, which he encapsulates as “born in Italy, grew up in the shadow of Thomas Edison and Henry Ford, and went on to bask in the light of Thomas Jefferson at the University of Virginia, and along the way somehow became a scientist.” His parents moved to the United States when he was in first grade. From there, he worked his way through Wayne State University in Detroit as the first person in his family to attend college.

His views were especially shaped by his years at Wayne State, he says, with its “strong liberal arts program, strong sciences, and a terrific art museum on campus. It was a big commuter school. In a lot of ways, it was like UAB, except that we’re more residential here — which is good, because it gives a greater sense of the college experience.

“At the beginning I thought I might want to teach,” Palazzo says. “I did well in the sciences, and my advisor said that with my good grades in chemistry, I should think about medical school. I started following a science curriculum and had the chance to study with a distinguished biologist and a famous chemist. They suggested I do lab research, and when the projects worked out well, I had the opportunity to stay and work for my Ph.D. with support from their grants.”

Branches of the Same Tree

Although his major was in the sciences, Palazzo says, the university’s arts offerings had a lasting impact on his life. “As a child I loved the books by Hendrik Willem van Loon, who wrote a series of histories for young people in the 1930s — everything from biographies to geography to the arts. And I developed a love for the great books, and for mythology, including Sir James George Frazer’s classic, The Golden Bough. Another big influence was historian Daniel J. Boorstin, who wrote the series of books titled The Americans, The Discoverers, The Creators, and The Seekers.”

Another formative college experience for Palazzo was the university’s filmmaker series, which screened works by major international directors in chronological order. And the museum’s visual arts galleries had significant Asian and Impressionist collections.

“I feel blessed to have been exposed to such a wealth of material,” he says. “And the most important aspect is that when you look at that vast panorama of intellectual and artistic talent — at the whole ‘long waterfront,’ as I call it — of the arts and sciences, you see that it’s not segmented at all, but simply describes various ways of viewing the world, various approaches in search of fundamental truths about ourselves and our universe. Frankly, my interaction with the faculty at UAB in those different fields has been the most refreshing part of my time here.” 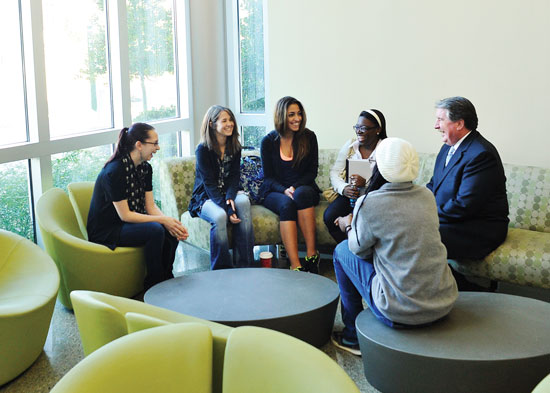 He was recruited to the Rensselaer Polytechnic Institute in 2002 to chair its biology department and help create a new center for biotechnology and interdisciplinary studies. Palazzo says he accepted the position in part because of the institute’s reputation. “Rensselaer is actually the oldest science and technology university in the English-speaking world,” Palazzo says. “It was founded in 1824, which preceded the Massachusetts Institute of Technology by some 60 years. Its impact in terms of entrepreneurship and innovation is enormous.”

Palazzo says he doesn’t buy the conventional idea that the arts and the sciences are by nature competing factions in education. “I think the tension developed in the post-war world, in part a result of heavy funding that was pouring into the sciences, with little investment in the humanities and the arts. This imbalance led to C.P. Snow’s famous book The Two Cultures and the Scientific Revolution, in which he criticized that rift, which to his mind was artificial. “I was taught that the Ph.D. is a philosophy degree,” Palazzo continues, “which means you’re a philosopher in biology, in the sciences, in mathematics. So I’ve always felt well aligned and enjoyed the setting of a college of arts and sciences.”

As for the narrative of the clam and the centrosome, Palazzo has gradually relinquished his research duties in recent years as his administrative responsibilities have increased. But he believes there’s still much work to be done in the area he began pursuing at Woods Hole decades ago.

“Even today, you can’t open a scientific journal without seeing a paper or write-up on centrosomes,” Palazzo says. “On the applied side, the question is, is the centrosome involved in root causes of diseases? And it is. I’ve always thought that if tubulin is a target for therapeutics like Taxol and some other treatments, then it’s possible that the centrosome, which serves to organize tubulin, could be an alternative target. I have no doubt that compounds selective for centrosome function would be useful.”

UAB’s College of Arts and Sciences was created on January 1, 2010, with the merging of the Schools of Arts and Humanities, Social and Behavioral Sciences, and Natural Sciences and Mathematics — areas of learning representing more than half of UAB’s academic resources, including 22 schools and departments, 300 faculty members, more than 6,500 undergraduates and 500 graduate students from as many as 50 countries, and some 40 different degree options, ranging from baccalaureate to doctoral. An outline of the college’s strategic plan describes it as “a kaleidoscope of intellectual opportunities for learning and the advancement of knowledge.”

The strategic plan also describes the college as “an immersive educational experience.” The beauty of a university, according to Palazzo, is that it represents “a platform for the collision of ideas.

“When you arrive at the essence of ‘what is creativity?’ and consider the origins of ideas, new ideas originate at the interface between disciplines,” Palazzo explains. “People are brought together with different perspectives, different experiences, and different views, all honed in their own disciplines, and then those ideas collide. And it’s at those collision points where you fine inspiration and novel perspectives. That’s how we advance knowledge. We can’t do it alone, especially now in the 21st century, with the explosion of information all around us. We’re part of what I call ‘a community of wise and trusted scholars’ who are all active in this pursuit of knowledge—a pursuit that’s as old as mankind, and modern universities are a perpetuation of that quest.”

When it comes to educating UAB’s students, regardless of their field of study, Palazzo says a top priority should be multiculturalism: “We used to call it ‘cultural tolerance,’ but I much prefer ‘cultural competence.’ As we recognize in our current strategic plan, new students will have to become competent culturally in order to succeed in the academic setting and in the marketplace. That’s true more than ever in the Information Age, and I believe it’s one more reason why a solid grounding in the liberal arts and sciences is critical in the character development and intellectual formation of the next generation of leaders who will be responsible for managing the problems of the world, which certainly aren’t decreasing.”

Moving forward as dean, Palazzo says he has three main personal goals: “First, I want to see the college—as well as UAB as a whole and the city of Birmingham—take a step forward in showing that it can compete in the international arena. Given the slope of its ascension, this fact hasn’t yet been sufficiently recognized, and I hope I can contribute to achieving that. Second, there are many students here who are, like myself, the first in their families to attend college. I’d like to help solidify that path for them and instill within those students the confidence that they can go out into the world and become national and international thought leaders.

“Finally, if I can assure an appropriate structure of policies, best practices, and financial management that will sustain the organization long into the future to achieve goals one and two, then my time here will have been worthwhile.”