Diamond in the Rough

Industrial diamonds may be less flashy than their multifaceted, organic cousins, but their durability offers great potential for scientific use Yogesh Vohra, Ph.D., professor of physics and associate dean of the UAB College of Arts and Sciences, has been conducting research on manmade diamonds for many years.

Industrial diamonds may be less flashy than their multifaceted, organic cousins, but their durability offers great potential for scientific use Yogesh Vohra, Ph.D., professor of physics and associate dean of the UAB College of Arts and Sciences, has been conducting research on manmade diamonds for many years. Recently he was awarded lead investigator status on a two-year grant from the National Science Foundation (NSF) to study potential applications for diamonds.

The highly competitive $600,000 NSF Partnership for Innovation grant will fund applications using diamonds in knee implants, lasers, and sensors, says Vohra, who’s also director of UAB’s Center for Nanoscale Materials and Biointegration and UAB Campus Director for the NASA Alabama Space Grant Consortium. The grant also recognizes the partnership between the university’s new Institute for Innovation and Entrepreneurship and the Birmingham Business Alliance. 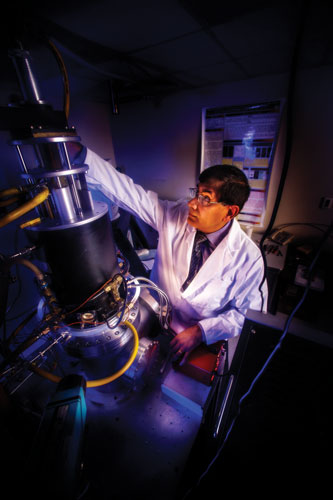 Yogesh Vohra“I think the main goal of this grant is to provide funds for conducting translational research on a scientific discovery in order to take it to the next level, which is commercial viability,” Vohra says. “So the two-year funding will finance research to overcome the barriers for using the materials in real-world applications.”

The NSF grant also funds the work of a graduate and a post-doctoral student and will help build and outfit a diamond micro-fabrication lab, Vohra says. UAB undergraduate students also will be engaged in the project.

All aspects of the three-pronged project involve diamonds, but they each have distinctive characteristics and individual business applications.

“We have three very clear application areas,” Vohra says. “These include diamond-based sensors, diamond-coated knee joints, and diamond-coated media for high powered lasers. The goal is to move these ideas from the laboratory across the hurdles separating them from commercial use.”

“For example, in the diamond-coated knee prosthesis application, we have to overcome the limitations of how to actually deposit nanostructured diamonds over a large area of the knee. That will involve answering what are the fundamental process innovations that you have to achieve so that you get a uniform coating over a large area.”

The potential is great for patients who need artificial knees or other articulating joints, which Vohra pointed out in a recent paper: “UAB researchers have demonstrated and patented a process for depositing ultra-hard nanostructured diamond coatings on metals that are very resistant to mechanical wear for applications in articulating joints like hip, knee, and dental implants. These coatings are mirror-finish, do not require any post-growth polishing and can be applied on large surfaces. The hardness and wear resistance of these coatings is two to three times better than the standard surfaces in hip and knee prosthesis.”

The NSF grant will allow the knee prosthesis, coated with nanostructured diamonds, to be tested in a UAB knee simulator to prove its durability and marketability, Vohra says. That testing would “establish its longevity in clinical settings and establish its competitive advantage over the standard knee prosthesis on the market.”

A second area the grant will facilitate involves installing multiple sensors on a single diamond crystal. Overcoming the barriers to manufacturing a multisensor diamond could have significant impact in situations where conditions are extreme. “These diamond-based sensors would wrk in applications where conventional sensors would fail because of extreme temperatures, stress, chemicals, or high radiation levels,” Vohra wrote.

“That is where we still have to answer some fundamental questions about whether we can put multiple sensors into one diamond device,” Vohra says. “Because to be commercially viable you would like a multisensor capability. That would involve putting an electrical sensor, a magnetic sensor, and a stress sensor on the device. We have done single stage in which we encapsulated a single sensor. But we really need to do multiple sensors in one device. So that’s why I think the grant is pushing research into new directions, with the goal of developing a viable commercial product.

“Already we use a single sensor in the laboratory for extreme conditions where material is under high pressure high temperature conditions. A question we really want to explore, once we develop these vertically integrated sensors, can we extend the application to oil drilling where you put this multisensor device into a hostile chemical environment? From that point of view, I think this research is really important.”

The third project is in collaboration with Onxy Optics, a Dublin, California-based company, to develop a device that figured into the 1971 James Bond movie titled Diamonds are Forever—a high-powered, diamond-based laser.


"Right now, the best thermal conductor is copper, and it conducts heat. Diamond is four to five times more efficient than copper in carrying away heat." — Yogesh Vohra
Of course, in the movie, the satellite-based laser was being used for evil purposes—to destroy nuclear weapons from space. But Onxy Optics, which bills itself as “the world leader in the manufacture of finished composite crystal and glass components for solid-state lasers,” builds its devices for far less nefarious clients.

In fact, Vohra says, the reason for using diamonds as heat sinks and bonding agents in lasers is that they are the best thermal conductors and the diamond surface is chemically inert. Diamonds “can carry the heat away very efficiently. Right now, the best thermal conductor in commercial use is copper and is used extensively for that purpose. Diamond is four to five times better than copper so it can carry away heat very efficiently. So the idea was that if we provide a diamond layer on the laser crystal, there will be a potential application in high-powered lasers.”

Currently high-powered laser crystals are limited by thermal run away problems leading to failure. “It’s the same technology in your Pentium chip,” Vohra says. “The chip generates a lot of heat. If you turn off your cooling fan, your chip will fail. So diamond is being considered as a very efficient heat conductor in those devices. It can conduct the heat away from any source.

“This is a new area for us. We had not done research into diamond coating of laser crystals before. So we’re going to look at this opportunity with our commercial partners to see if we can overcome the technological barriers.”

UAB has more than one connection with Onyx, and that points to potential advantages for what Vohra calls UAB’s primary product. “Our main products are students. Onyx had hired a physics Ph.D. student trained in Vohra’s lab in the past. This research really provides excellent training and networking opportunities for graduate students, undergrads, and post-docs. Hopefully some of the personnel would be involved in opening up new companies.” Those new companies could be located in Birmingham, he notes.