A New Kind of Storyteller

Most creative leaders in this world got to where they are today because they are problem-solvers: they find a need and fill it. In fact, it was this determined mindset that led Rosie O’Beirne and Anna Lloyd to establish the program of their dreams: the UAB Digital Media Fellows.

Most creative leaders in this world got to where they are today because they are problem-solvers: they find a need and fill it. In fact, it was this determined mindset that led Rosie O’Beirne and Anna Lloyd to establish the program of their dreams: the UAB Digital Media Fellows. 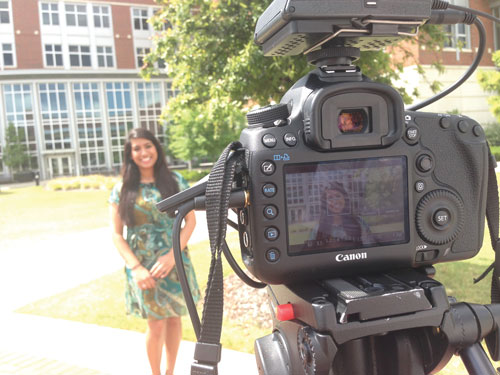 In the spring of 2011, Anna Lloyd, then a senior at UAB, was starting her job search.

After landing a position in Web Development in the UAB Provost’s Office, she saw how great the need was for digital media services on campus. At the same time, media studies professor Rosie O’Beirne had noticed the same need from non-profit organizations all over the city. “[Anna] saw the UAB demand, I saw the community demand, and we both saw the same model of students servicing that,” says O’Beirne. “I was looking around to see what tools were being used on campus and how I could incorporate them into the classroom from early on.”

It was that common realization that began the building of UAB Digital Media that O’Beirne now directs, which includes the Media Commons production space, managed by Chris Humphries, and the Media Fellows program, led by Lloyd.

“We decided early on that media fellows needed to be the cream of the crop in digital storytelling on campus,” says Lloyd. “And we believe that if you’re that good at what you do, you deserve to be paid.”

Media Fellows work 20 hours a week at $12 an hour. This wage was set to show students that they have just as much to offer as professionals do. And every dollar made by student projects with external clients goes right back into the program.

“We wanted to have some sort of extra cherry on top,” says Lloyd so in addition to the regular pay, Media Fellows also receive a technology stipend of $1000. Students can use this money to purchase new equipment such as lenses and laptops or even apply the money towards attending a conference.

Becoming a Media Fellow is more than just simply submitting a resume. O’Beirne and Lloyd made it clear that the application process was more about telling your story rather than boasting your experiences. “We wanted to attract students who were digital-savvy, of course,” says Lloyd “but we wanted to find students who are eager about learning and sharing knowledge with others, students who can work on a team, energize other people and be a leader.”

She goes on to say, “We wanted students who show a deeper understanding of what’s being communicated and know how to use the technology to do that. The technology is the medium, but you have to know how to tell a story first.”

So at this point you’re probably wondering who might these up-and-coming student storytellers be? Well there are seven of them, and each one is as unique as the digital skill they bring into the lab. 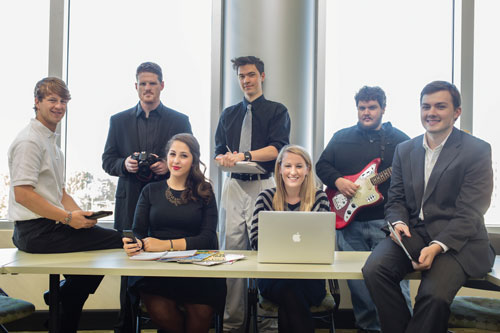 From left: Matt Drummond, Daniel Twieg, Karla Khodanian, Ryan Meyer, Betsy Cates, Kevin Peek, and Brent Caswell.Every team needs a great comedian to keep its morale up, and that’s where Daniel Twieg comes into play. He is a skilled animator, talented videographer, Addy-award-winning designer and friend to all. This year he has contributed to multiple video projects and is currently lead on a video project with local non-profit Bama Covered. Twieg is a senior finishing up an individually designed major in the digital arts.

Professional composer by day and electric rock star by night, music major Kevin Peek serves as the team’s resident audio engineer. Rather than paying money for stock music, UAB Digital Media utilizes Peek to create the powerful beats you hear in the background of every video project they produce. Peek’s talents were utilized beyond the lab earlier this school year when he was contracted to compose the pieces for the university’s syndicated commercials.

No digital collaboration is complete without the opinion of the in-house artist. Ryan Meyer, a senior in the BFA program, has the detailed eye and the skillful hand needed of a graphic designer. Meyer has been with UAB Digital Media since the lab opened, so his resume has grown with the program. He hopes to take creativity into the advertising world with him once graduating.

As the technology grows, the need for web designers grows with it. Betsy Cates, a senior Art Studio major, started as a Media Fellow with a knack for graphic design, but soon found a love for development. Betsy spearheaded the redesign of UAB’s Department of Art and Art History’s website as well as creating the site for the new AEIVA building. She also won a Silver Addy award for the Department of Art and Art History’s new logo design. Following graduation, Betsy will begin a full-time post-bac position with the Digital Media team.

The youngest student of the bunch, junior Business Management major Matt Drummond’s steady-hand has made him a powerful asset to the videography team. Ask any question about lenses, cameras or any other fancy videography equipment and he’s got your answer. Serving as the lead videographer for the TEDxBirmingham video project, Drummond’s skilled editing expertise and patience proved his place as one of the strongest storytellers.

A seasoned tech blogger with articles featured on Gizmodo, senior Political Science major Brent Caswell serves as the team’s guru for all things web-related. His passion lies in creating functional user interfaces and has devoted this passion in creating UAB Digital Media’s ‘Knowledge Jam,’ a website filled with articles, videos, and digital advice created by students working in the Media Commons.

And I suppose it’s at this point where I should introduce myself, your trusted author, as a Media Fellow as well. I’m the team’s social media addict whose face is usually buried in my iPhone composing what I believe to be the next great tweet. As a senior Public Relations major, I knew my love would lie in the communications side of all of our initiatives, but perhaps my greatest discovery as a Media Fellow is my love for producing. Through the TEDxBirmingham promo video project, I realized the passion I have for telling stories through as many digital tools as possible. 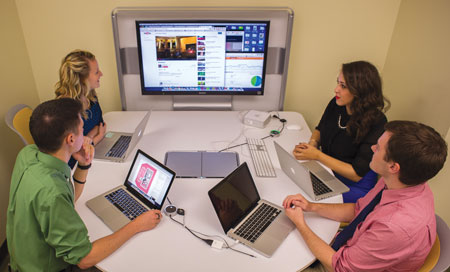 “In the future we want to expand Media Fellows program and offer students even more opportunities,” concludes O’Beirne. "Ultimately we are here to teach students that your knowledge has value and when you can, you should share it.”

Though it’s great to have a dollar value attached to my work, it’s even greater to have advocates like O’Beirne and Lloyd by my side championing my value as a creative professional. The experiences I have gained and the connections I have made in my time as a Media Fellow will be unrivaled.

The most important lesson I’ve learned is that collaboration is key to a successful project. Without a good team motivating each other along the way, success would be far-fetched. Considering we won a Gold Addy award from the American Advertising Federation for our collaboration on the TEDxBirmingham promo video, I’d say we’ve nailed process down just right.

The UAB Digital Media staff has started recruiting for next year’s crop of Media Fellows. For more information on the program visit www.uab.edu/digitalmedia.