Communication Studies alumna Laura Britt is front and center on the 120 Sports network.

Communication Studies alumna Laura Britt is front and center on the 120 Sports network. 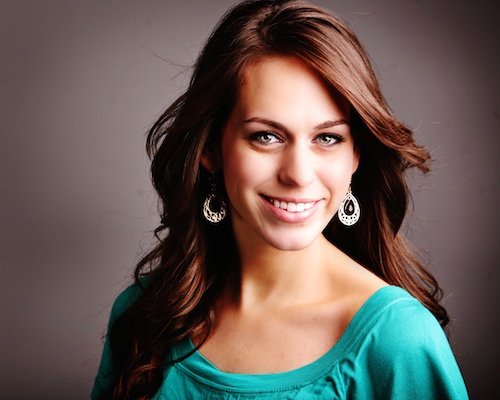 120 Sports content partners include equity investor Time Inc. (owner of Sports Illustrated) as well as the NHL, NBA, MLB.com, NASCAR, the PGA TOUR and leading collegiate conferences via Campus Insiders. The concept for the network—delivering news and commentary in real time alongside legions of fans who are themselves sharing news and commentary—fits Britt’s personality and work style perfectly. “My title is ‘update reporter,’ and I’m on at the top and half-hour of every hour from 5 p.m. to 1 a.m.,” Britt says. “Most broadcast jobs are no more than two hours on the air, but this is eight hours of live video programming. It’s long hours, but it’s such an exciting place to be. I want people to feel like this network is really for them, and we are putting in the time to make that happen.”

Britt relies on the team in the network’s “social den” who monitor social media sites like Facebook and Twitter to see what people are talking about online. “The latest thing Johnny Manziel is doing, the Donald Sterling developments, anything,” she says. “And then we go on the air and discuss it with our analysts.” Each story is only covered for two minutes—or 120 seconds—hence the network’s name. Since the video programming is available as a free native application for mobile and tablet devices as well as a web experience at 120Sports.com, additional information on the subject Laura is covering can be linked, allowing viewers to access more information immediately, rather than have to listen to a longer segment on a traditional television network. The 120 Sports video user experience is complemented by a series of patented, interactive data cards that also allow real-time integration of sponsor messaging . “They appear at the bottom of the viewer’s device,“ Britt says. “We have a second team that is doing the research for that data and they post it the form of stats, videos, that kind of thing. So every two minutes, they have to have a new set of data cards ready to go with the story we’re talking about on the air. You can imagine how hectic it is if we have a breaking story come in.”

It’s a fluid way of covering a fluid subject, and it takes a lot of preparation, Britt admits. “It’s a lot to know,” she says. “Every day you’re learning something—multiple things. I love my job, because I’m passionate about things that people are passionate about. Sports make people happy. They love it. It’s what they do in their off time. That’s a great job to have.”

While Britt didn’t consider sports reporting as a career when she was in college, it became an option almost immediately after she graduated. She received her B.A. in Communication Studies with a concentration in Mass Communication-Broadcasting, and minored in Communication Management and Spanish. And as a student, she interned at ABC 33/40 in Birmingham and the Fox News Channel in New York City. When she finished school, Britt landed a job as a sports reporter at WDBD Fox 40, the Fox affiliate in Jackson, Mississippi. Although her role was somewhat unusual since not many women worked in sports journalism, Britt threw herself into the job, working in the field (shooting, producing, editing and writing her own spots), filling in as anchor, and hosting a 30-minute high school football show once a week.


"Laura was a unique blend of intelligence and personality that comes across great on camera. — Dr. Larry Powell, Communication Studies
In time, she found herself on the station’s morning show—again, launching herself into a challenging situation with confidence and passion. “When my boss announced that they were going to start the morning show, I just asked him if I could be a part of it,” she recalls. “Some days, I would be on in the morning, go home and sleep, then come back at night to cover sports. It was a lot of work, but I wouldn’t trade my experiences for anything.”

At ABC 33/40 and Fox 40, Britt says she learned the fundamentals of how a local affiliate station works. “Local stations and national networks are similar in a lot of ways,” she says. “Until I worked there, I didn’t really know how they operated. The morning meetings, how the stories are identified, how the reporters work in the field, all the basics.”

But it was her internship at Fox News that really opened her eyes to the possibilities. “I went there the summer just before I graduated in December,” she says. “Fox News Channel really made me dream bigger. I realized how many different opportunities were out there. Producers noticed my hard work as an intern and gave me the chance to host an online show. That was a big moment for me. Being around people at that level made me want to go for it.” 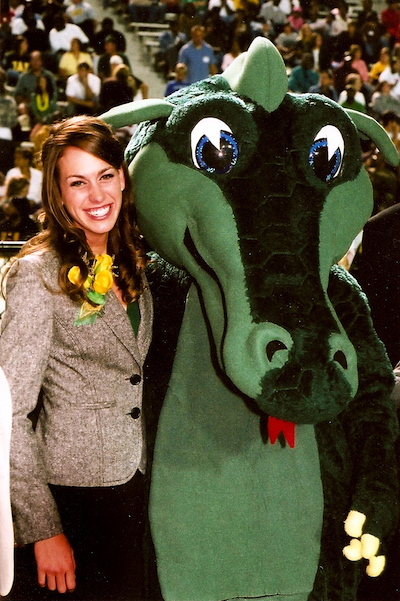 Laura and Blaze at the 2008 homecoming game, at which Laura was recognized as a finalist for Ms. UAB.Yet Britt is quick to say that the foundation for all of her opportunities was laid at UAB, thanks in no small part to the guidance she got from one of the advisors. “I was a General Studies major for as long as you possibly could be,” she laughs. “I remember sitting in the advisor’s office holding a sheet of paper with all of the majors—I literally still have it to this day and I’m looking at it right now—we talked through all of the choices and eliminated what didn’t fit. There are Xs over what we rejected and a big circle around Communication Studies.”

Britt notes that her instructors and professors, namely Chris Pollone, Dr. Larry Powell and Dr. Jean Bodon, were also big influences. “Chris Pollone taught Newswriting for Broadcasting as an adjunct—he was working for NBC 13 in Birmingham—and I learned skills in his class that I still use to this day,” she says. “Dr. Bodon’s Fundamentals of Broadcasting class was also influential.”

Powell says, “Laura was a great student and is also a great person. She was a unique blend of intelligence and personality that comes across great on camera. Add to that her work ethic and ambition, and it’s no wonder she’s been as successful as she has. I’m very proud of her.” Pollone shares similar sentiments about his former student. “I’m not surprised by anything Laura does,” Pollone says. “Fox News had a campus affiliate program when Laura was at UAB, and they chose two students on college campuses across the country to go out with a microphone and camera and file their own stories that would appear on a national college website. They gave Laura a Fox News mike flag and a camera and off she went. I thought it was impressive for Laura to do something like that on her own. Truth be told, she has tremendous natural ability—some have to work at it. But she was producing things then, even before taking some basic courses, that were extremely good.”

Pollone says he suspects that it won’t be long before Britt makes another major career leap. “There are a million things that Laura can do,” he says. “From the moment she walked in the door [of my class] until this day, I thought, ‘This girl has star written all over her.’ I hope that she always gets to exercise what she wants to do. I really think she could be a [broadcast]personality, and not everyone has that.”

An opportunity to build, from scratch, the BlazerTV channel was also a big factor in Britt’s future career. “My graduating class created that,” she says. “Unlike a lot of universities that had stations that were only available to upperclassmen, UAB didn’t have a station, and that really benefitted us. It didn’t exist, so we just did it ourselves, under the direction of Dr. Jean Bodon in Television Production I and II. I learned skills on that project that I still use: I wrote stories, I worked behind the camera, I used the prompter, I was a reporter. Every job in the business—we did it.”

As for why she chose UAB, Britt notes that it was almost pre-determined. “UAB is in my blood,” she says. “My dad received a M.S. in Head and Neck Anatomy, finished Dental School and did a periodontal residency all at UAB. My mom has a M.S.N. and Ph.D. from the School of Nursing and is currently on their faculty. My brother has a Master’s degree in Computer Science and will soon complete a Ph.D. from the Department of Computer and Information Sciences, and my sister took two years of classes at UAB before going to Wyoming to work.”

Britt’s future seems bright, but she’s trying to savor each chapter. “I’m just enjoying the moment,” she says. “I’m learning a lot. Michael Kim worked for ESPN for almost 20 years. And Dave Ross, he was so influential in the DC market for 18 years. They are incredibly talented and knowledgeable. Getting to work with people like that, being able to have people like that as mentors—it’s such an amazing opportunity and I love learning from them.”

“I don’t want to be ‘the next’ someone else. I just want to be the best version of myself.” she says. “I want to keep every door open.”