Gbowee gave a free public lecture at the Alys Stephens Center on September 29 at a kickoff event for the UAB Institute for Human Rights (IHR).
When war devastated her home country of Liberia in the late 1990s and early 2000s, Leymah Gbowee realized that it was often women who bore the brunt of the burden of the ongoing, deep-rooted conflict. Faced with systematic human rights violations and rape, women in Liberia struggled with the trauma and destruction associated with civil war. Gbowee mobilized an interfaith group of Christian and Muslim women to demonstrate together and organized sit-ins, non-violent protests, and sex strikes. Ultimately, she founded the Women of Liberia Mass Action for Peace, which helped ending the civil war in 2003 and let to the downfall of Charles Taylor, the country’s then president. 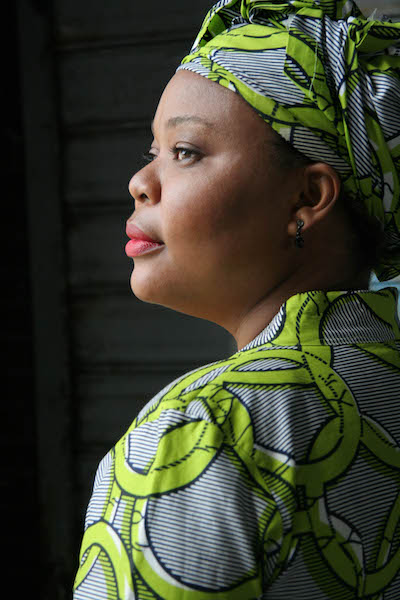 Leymah Gbowee (Photo: Michael Angelo)Gbowee’s efforts enabled a period of peace and stability in Liberia that paved the way for the election of her collaborator, Ellen Johnson Sirleaf, as first democratically elected female president of an African country. Along with President Sirleaf, Gbowee was awarded the Nobel Peace Prize in 2011 “for … non-violent struggle for the safety of women and for women’s rights to full participation in peace-building work.” Her historic achievements were recounted in the documentary “Pray the Devil Back to Hell” (2008) and her memoir “Mighty Be Our Powers” (New York: Beast Books, 2011, with Carol Mithers).

Recognizing that women in leadership positions are effective brokers for peace, human rights, and social justice, Gbowee formed the Women Peace and Security Network (WIPSEN-Africa) based in Accra, Ghana. She is also the founder of the Gbowee Peace Foundation Africa in Monrovia, an organization providing educational opportunities to girls and women in Liberia. She is an Oxfam Global Ambassador and serves on the boards of the Nobel Women’s Initiative, the PeaceJam Foundation, and is a member of the Ara Pacis Initiative and the High Level Task for the International Conference on Population and Development.

Gbowee gave a free public lecture at the Alys Stephens Center on September 29 at a kickoff event for the UAB Institute for Human Rights (IHR). The IHR was established in the summer of 2014 and with the arrival of director Tina Kempin Reuter, Ph.D. in February of this year, has officially begun its operations. The IHR’s mission is to bring together scholars, educators, students, and activists to raise awareness, engage in education, foster research, and design initiatives for practical action resulting in the promotion and protection of human rights. Hosting public lectures and facilitating outreach programs involving the UAB community and beyond are part of the IHR’s mission to provide a forum for discussion and collaboration. The IHR is housed in the College of Arts and Sciences and will contribute to the College’s strategic goal of increasing the College’s international profile and to prepare students to succeed in an increasingly complex global environment.

The selection of Gbowee as the Institute’s first keynote speaker is exemplary of what the IHR strives to achieve. “Leymah Gbowee is a role model for all of us who engage in human rights and peace work,” says Dr. Reuter. “Her activism for community building, peace, and women’s rights in Liberia is unparalleled and serves as an example of remarkable leadership and successful grassroots efforts. She represents what the UAB Institute for Human Rights has set out to do: to raise awareness and to educate, to research and to find practical solutions for the promotion of human rights and sustainable peace.”

Gbowee’s lecture discussed her experience organizing a grassroots human rights movement to advocate for political change and social justice. Her talk addressed best practices of non-violent activism and focus on the lessons learned in Liberia and how they are applicable to other movements worldwide. This is a timely topic—not just for UAB, but also for Birmingham, Alabama, and the U.S., considering the city and country’s own civil rights history and the contemporary movements for social change. Local grassroots organizations can learn from efforts abroad, and vice versa, thereby establishing fruitful dialogue and cross-pollinating innovative solutions to our world’s most pressing issues.

Gbowee’s lecture marks the beginning of the IHR’s public speaker and outreach program, which will feature other international human rights experts from around the world, including human rights advocate Ambassador Ahmet Shala, the former Minister of Finance and Economy of the Republic of Kosovo, and a panel discussing the refugee crisis in the Mediterranean.

To learn more about the UAB Institute for Human Rights, visit uab.edu/cas/humanrights