Strike Up the Band!

Under the leadership of new director of bands Dr. Sean Murray, the marching blazers are ready to retake the field this fall.

Under the leadership of new director of bands Dr. Sean Murray, the marching blazers are ready to retake the field this fall 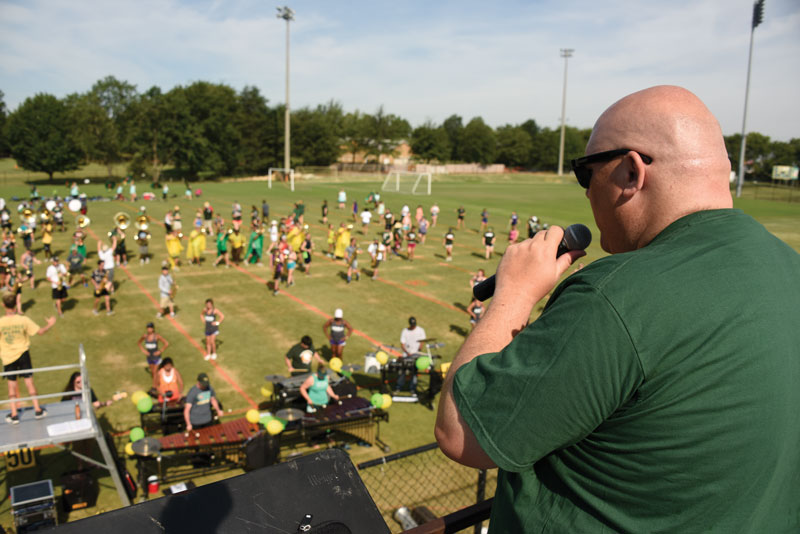 Sean Murray knows he landed in a good place. Band director positions at the college level are scare, especially at the better programs. That’s why, when Murray saw the posting for the Director of Bands at UAB, he knew that it was something he should pursue. “When it posted, I remember thinking, ‘That would be a great job,’” he says.

An associate director of bands and associate director of music at Florida Atlantic University since 2006, Murray says he was ready to move into the director’s role. “As you progress in any job, there comes a time you want to grow and you want to go somewhere to be the decision maker on things,” he says. “With bands, there are only one or two spots at each school, and there’s so much competition for them. If you get a phone interview for a university bands job, you should count yourself lucky.”

Luck or not, Murray found himself progressing through the phone interview stage at UAB to a campus visit, and his once he got to campus, his hunch that the job would be a good one was confirmed. “You’re interviewing each other at that point,” he says. “You’re getting the feeling of the place, the vibe—while they’re assessing you at the same time. During my interview, I got to work with the band members and saw that they were playing at a very high level; they were really working at it. I also had been following the football story and knew the band had stayed together and had continued to rehearse, travel and perform without UAB Football. They had decided, ‘We’ll just keep doing our thing.’ That said a lot about the culture here.”

The Marching Blazers aren’t the only band at UAB. Students can participate in these additional bands and ensembles:

As UAB approaches its 50th anniversary in 2019, the university’s once-nascent school spirit rituals are evolving into deeply held traditions. And Murray, who also has a faculty position as an associate professor in the Department of Music, has no plans to change that. “I respect tradition more than anything,” he says. “In my experience, there’s usually a good reason for doing things. I think a successful director goes in and assesses the situation before he or she decides to change things.”

“Traditions are really fascinating to me,” Murray continues. “You never know what will stick. Why do people learn the lyrics to one song and not another? But you have to respect what’s already there, even if no one can explain why they do it the way they do. Alumni want to come back to games and feel comforted. They want to hear the fight song thy way they remember hearing it when they were students.”

Yet at the same time, Murray says, UAB has an opportunity to develop and instill new traditions that will be cherished over the next 50 years. “As you’re making plans, you have to think, ‘We have to put the traditions in,’” he says. “You have to keep at it. You have to be persistent, and play a new song over and over again until it clicks.”

Murray understands the challenges in developing a marching band around a new (or returning) football program. He arrived at Florida Atlantic in only the second year of their football program, and that was a big motivator for him. “I wanted to be a part of building something, and I wanted to stay to give the programs—both the band and the team—a good shot.”

That experience is what makes him such an asset for the UAB Marching Blazers. “The nice thing about this position is that the interim directors Gene Fambrough and Cara Morantz were both here before the football program was eliminated, so they can explain everything the band did before, and since,” he says. “And I’ve come from a place where we had to almost start from the beginning, so I can bring that to the table. It’s really a great place to be: You have this history and institutional knowledge, and then you have new ideas and a background in building or rebuilding a program. I’m excited about what we’re going to accomplish together.” 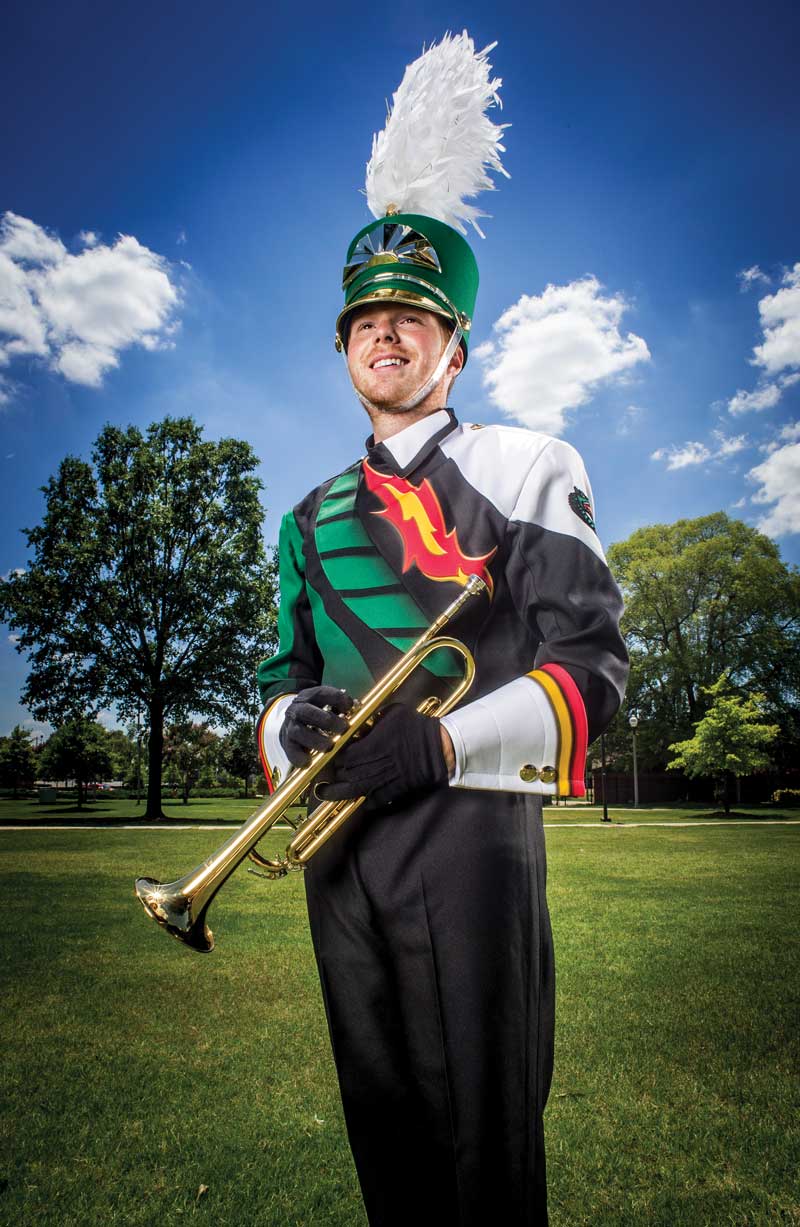 The Marching Blazers are wearing new uniforms this fall, thanks in large part to the generosity of donors, who have contributed more than $65,000 through a crowdfunding campaign. Donors will receive one of the older band uniform jackets as a keepsake and gift of appreciation for their support.

The new uniforms are inspired by Blaze, UAB’s beloved mascot. Dragon flames on the jacket front—and Blaze emblems and orange and red colors on the shoulders and sleeves—add pop to the classic black, white and green ensemble. Even a touch of Blaze’s dragon scales are evident.

“Uniforms always have a shelf life of 10-12 years if you’re lucky,” says UAB Bands Director Sean Murray. “It was time for UAB to upgrade the uniforms anyway, so it was just perfect timing that we get the new ones right as the football program returned. The uniforms are going to add a new look and feel to our field show, and I'm really excited about that."

Murray says the fall show the Marching Blazers will perform is going to be fun to watch, not in small part due to the brand-new uniforms the band will be wearing. “Uniforms have a shelf life of 10-12 years, if you’re lucky,” he says. “It was time to upgrade ours and get new ones, and it just so happened doing so coincided with the return of football. So it’s going to add a new element of excitement to the whole experience.” (For more on the new uniform, see sidebar.)

Other changes will be evident before and during the games, too. “We’re developing a new march version of the alma mater to the pregame show to add some pep to that. It’s just another way to perform a song that people are accustomed to singing slowly at the end of commencement or other celebrations. This will be upbeat and inspiring to the fans and alumni.”

All of this takes many hours behind the scenes, by the band faculty, staff, and students. “When you get 200-plus people together to play a 10-minute show, it doesn’t just happen,” Murray says. “You have to get a good sound out of everyone, but you also have to work on marching carriage and stature. It takes constant upkeep. You don’t just learn the show and then stop. You have to keep working at it all semester long. What happens on the field—the football team, the Blazerettes, the color guard, the majorettes, and the instrumentalists—represents hours and hours of rehearsal. The team has their two-a-days; we have our 10-day camp in August. And many of the students have been working ahead of that. The camp alone is easily 90-100 hours of practice by the band. It’s just a tremendous amount of work for a three-hour game.”

Assistant director of bands Cara Morantz, who is also an assistant professor in the Department of Music, says that the grueling August camp went very well. She credits Murray with making the experience as good as it was. “I think all of our students are really enjoying Dr. Murray’s presence in rehearsals, as well as the many extra events associated with band,” she says. “He brings so much positive energy to each meeting. He is genuinely interested in hearing from all staff and students.”

Morantz, along with fellow assistant director Gene Fambrough, did the hard work of maintaining the program while the College searched for a fulltime director. While it was a challenge, she says the payoff is starting to be realized. “Keeping the program going and maintaining our numbers was of the utmost importance in the absence of football,” she says. “Now that’s it’s back, we are thrilled to have Sean’s enthusiasm leading our program.”

Fambrough, an associate professor of percussion, agrees. “It’s been great working with Sean. He arrived on campus mid-May and has been working tirelessly ever since to make sure we had a successful year. Running the program during in the interim was surprisingly smooth, and that’s ultimately a testament to the students and their willingness to work hard.”

Morantz says the entire band family has high hopes for the future. “We hope to see our band program, Department of Music, and university continue to grow in these next few years. It’s a very exciting time to be a Blazer.”

In the midst of the excitement and preparation for the fall football season, Murray says his priority remains the students. “For me, as a teacher, I want to make it a great experience for the students. I want to push them,” he says. “Students who play music at the college level have been playing an instrument for a minimum of four years, probably more. But even the best student musicians can be better. Our job is to coach them up—taking what they can do and making sure they can do it even better.”

“I think a lot of people don’t realize that 80 percent of our Marching Blazers are not music majors,” Murray says. “They are biomedical engineering majors and chemistry majors and English majors, and music is and has been an outlet for them since middle school. But at the same time, we are here to create art. People don’t necessarily see the artistic element in a marching band, but it’s there. The artistic expression sometimes gets lost and people think of what we do as only entertainment, but we are creating fine art and performing art. It’s at the foundation of everything we’re doing.”

Regardless of what the students are studying, Murray says band members are always high-achievers and hard workers. “Smart kids do band,” he says. “They just do. It just fits naturally with their other academic pursuits. For those marching band students who are not music majors—who will end up being doctors or lawyers or engineers or computer scientists—they will become our future patrons, because they will always value the experience they had in this community, playing music and performing for the fans. It will always be a part of who they are.”