Love and learning are the two recurring themes of Sol and Rita Kimerling’s incredible story.

Love and learning are the two recurring themes of Sol and Rita Kimerling’s incredible story.

A Love for Rita

Sol Kimerling was an undergraduate at the University of Alabama in the mid-1950s with plans to take his physics final, until a certain dark-haired co-ed from Montgomery named Rita Capouya invited him to a picnic. “Needless to say I never made it to my final,” he laughs. 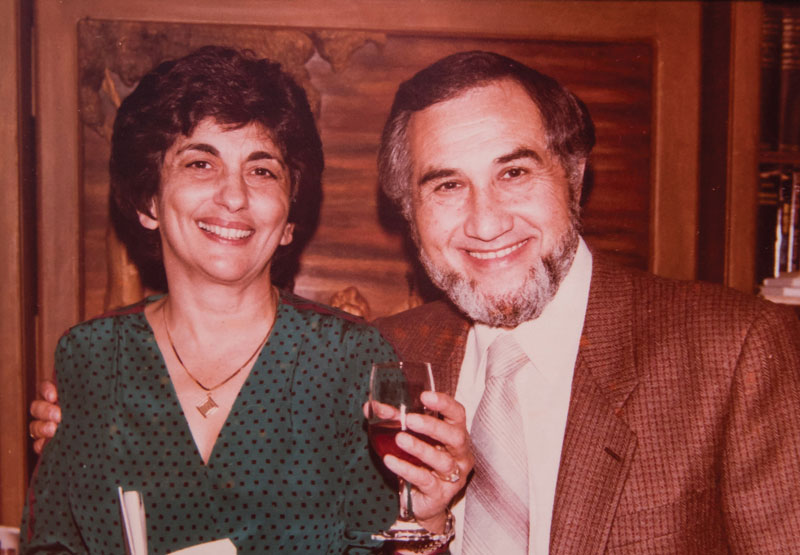 Sixty-five years ago, Rita and Sol Kimerling’s first date laid the cornerstone for a lifetime of love and learning that continues today. Although Rita’s long battle with cancer ended in 2010, Sol still speaks about his wife with devotion. “She was the brightest, most beautiful person you’ve ever met,” he says. “She made Phi Beta Kappa as a sophomore. She came from a Sephardic Jewish family and spoke their language, which is a combination of Spanish and Hebrew. She also spoke Spanish and French. I tell my kids, ‘You got your Mama’s looks and your Mama’s brains, but you got my luck.’”

The couple married and Sol started law school at the University of Alabama, but was asked to come home and help in the family business before he was able to complete his degree. Not long after that, Sol—who had been an Air Force ROTC cadet at Alabama—found himself called for duty during the Korean War. “I worked at the smelter for a while, but once you’re out of school, they call you up,” he says.

The Kimerlings, now with daughter Elise in tow, were stationed in France during the war. After Sol finished his service, the family returned to Birmingham, where their second daughter Judith was born just a few months after their arrival. With little time to settle in, the young father and veteran was charged with the responsibility of running Alabama Oxygen Company, the business his father had spun off from his grandfather’s scrap metal business.

A Love for Birmingham

Kimerling took the helm of Alabama Oxygen Company as racial tensions in Birmingham were exploding into violence. He saw firsthand how African Americans were treated by Bull Connor and the police department as well as the Ku Klux Klan—treatment that was familiar to him as a Jew. “I was called terrible names when I was at Ramsay High School,” he says. “We had a swastika painted in front of our house when I was a child.” There was also an attempted bombing of the Kimerlings’ synagogue, Temple Beth-El, which happened at roughly the same time as the bombing of the Rev. Fred Shuttlesworth’s Bethel Baptist Church—two incidents that were deeply rattling to the Birmingham Jewish community since they evoked memories of Kristallnacht in Nazi Germany. 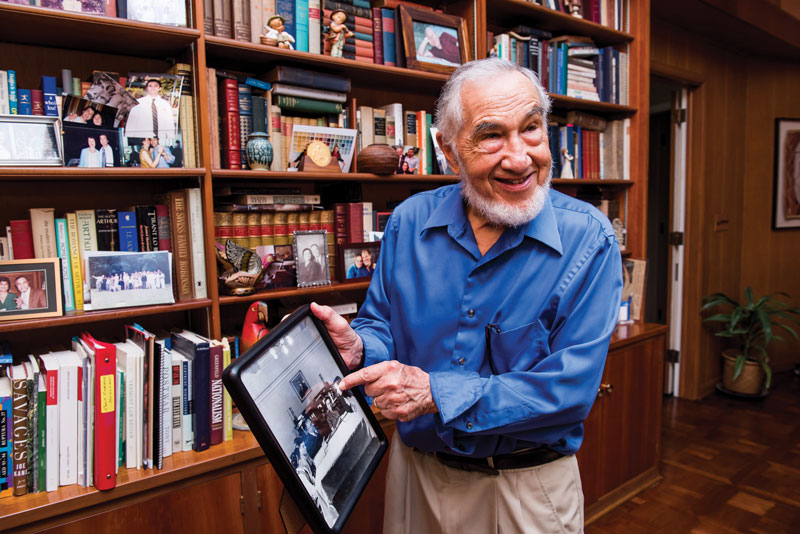 Sol shows off a photo of him with his brother and cousins at his grandparents' house for Sabbath-day lessons.

In one memorable incident, Sol saw his grandfather physically confront Klan members at their business on 28th St. N. But he was not surprised by his grandfather's bravery. “The Klan had been protesting at the company because we'd hired black employees to be foremen and to drive the equipment,” Kimerling says. “My grandfather threw them out for that. And they came back and sued him. But he didn’t care. He was vindicated when a federal judge here in Birmingham threw out the case.”

Kimerling’s grandfather had long been a seminal figure in his life. Every Saturday, after Sol, his brother, and his cousins left services at Temple Beth-El, they went to their grandparents’ house on Southside for additional studies. The boys sat around the dining room table, carefully laid with a white lace tablecloth by his grandmother, and listened to their grandfather teach history, government, economics, philosophy, business, and many other subjects. Kimerling says those Saturday afternoons instilled in him self-discipline, hard work, and education that he has carried throughout his life.

A Love for Learning

Kimerling’s famous luck spared him a failing grade on the physics exam he skipped in order to picnic with Rita (“The professor was a romantic; he let me take it the next day,” he says). But his spontaneous decision to miss the test was in no way representative of how he felt about education. His years of being encouraged and driven by his parents and grandparents—not to mention his marriage to a brilliant woman—meant that those same values were passed down to Sol and Rita’s four children.

Elise, Judith, Michael and Leslie are so accomplished that it’s almost unfathomable. Elise Kimerling Wirtschafter went to the University of North Carolina at Chapel Hill and completed her Ph.D. at Columbia University. Today she is a professor at California State Polytechnic University in Pomona—with many books to her name—and is one of the country leading authorities on Russian history. “She’s the real deal,” Kimerling says.

Judith went to the University of Michigan and Yale Law School and teaches Environmental Law and Policy at Queens College in New York. She is an awarded environmental litigator and indigenous rights activist who endeavors to protect the isolated native peoples in the Amazon rainforest. Her work has led to landmark class action lawsuits against the petrochemical industry and New York Times best-selling books about the environmental degradation of the Amazon basin.

Michael also went to the University of North Carolina at Chapel Hill. He received his M.D. from the UAB School of Medicine and his M.P.H. from the UAB School of Public Health; he completed his residency at the University of Minnesota. After several years of practice in Birmingham, he began working with Doctors Without Borders, the Gates Foundation, and other international aid organizations. Today, he lives in the Netherlands and works with KNCV Tuberculosis Foundation, where he participates in a global effort to combat the disease.

Leslie graduated from the University of Pennsylvania and received her MBA from Stanford University. Today she is a highly successful entrepreneur with years of experience growing and launching young companies. Her current endeavor is Double Helix, a 3D nano-imaging system, which can image a single molecule inside individual cells and that has already won numerous start-up awards.

A Love for UAB

Sol and the children weren’t the only busy people in the Kimerling family. Rita made a name for herself, too, as a talented artist and as a pioneering civic leader. She served as the first female president of the Birmingham Jewish Federation, she co-founded Jewish Family Services, and she was a leading supporter of The Red Mountain School.

Over the years, the Kimerlings also found numerous ways to be a part of UAB: Sol as an adjunct professor in the School of Business; Rita as a charter member of what is now the Advisory Board of the Comprehensive Cancer Center. Her work with the Cancer Center included establishing a patient support program, advocating for patients and their family members, and holding numerous board offices. She was honored with the American Cancer Society’s Life Inspiration Award in 2005. 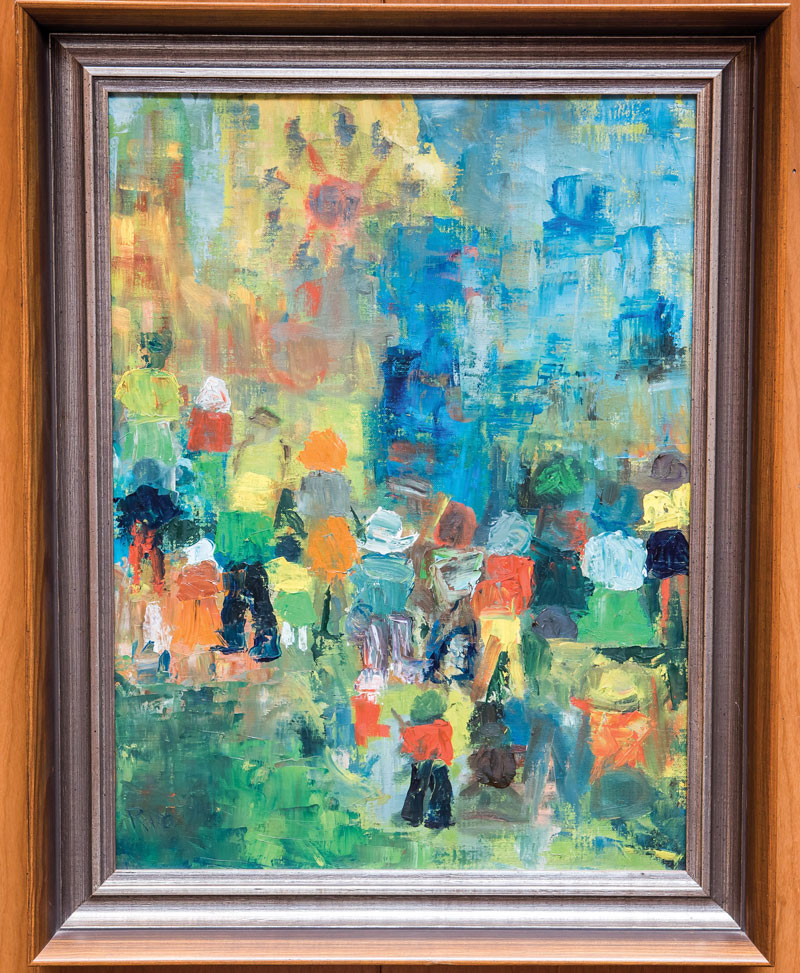 One of Rita's many paintings that hang throughout the Kimerling home. This one is entitled, "Children at Play" and is Sol's favorite.

Alongside her official charitable and volunteer work, Rita also developed a number of interfaith programs that helped educate and build bridges throughout Birmingham. Pamela Sterne King, assistant professor of history at UAB and a good friend of Sol’s, says that Dr. Jim Tent, former chair of the Department of History, met the Kimerlings when he was invited to speak on German history to an ecumenical group of Jews and Catholics that Rita had organized. Dr. Tent became good friends with the couple, and years later told Pam that Rita Kimerling was the smartest person he'd ever met. “That was incredible to me,” King recalls. “Jim Tent was an accomplished scholar. He got his Ph.D. at the University of Wisconsin and was a highly regarded historian. He had met a lot of smart people in his day, and it just struck me for him to say that. He could’ve said that about a lot of his fellow academicians, but he said it about Rita.”

Dr. Tent introduced Sol and King when Kimerling was looking for a faculty member who would know about Birmingham history. King is a public historian and former historic preservationist for the City of Birmingham, and she says she immediately struck up a friendship with Sol that continues today. “Sol’s abiding interest is Birmingham history,” King says. “He wants to make sure all of the pertinent stories get told: Jewish history, Civil Rights history. We can talk about this stuff for hours.”

The pair decided to put their knowledge and common interests to paper in a series of articles they wrote for WELD newspaper called “No More Bull!” which explored the era when Bull Connor was Birmingham’s notorious, racist police commissioner. They timed the 12-part series to coincide with the 50th anniversary of the bombing of the 16th Street Baptist Church: September 13, 2013. “He did half, and I did half,” King says. “I had a great time. I think we learned a lot from each other.”

In recent years, King says her long conversations with Sol began to delve into ways that the UAB academic community could be more involved in the larger civic community. “Since I’m interested in public history, I thought I could create a lasting program in the department, and I thought Sol would be interested. Rita had died, but he was still madly in love with her, so he named it for her. Our goal was to do something that would get the community involved.”

Sol established The Rita C. Kimerling Public History Endowment to honor his wife and to provide a support fund for programming in the Department of History. With the endowment, King has already organized a lecture series called “Telling Difficult Histories” that explores how different communities confront and share stories of their painful pasts. The first event featured Vanderbilt’s Stephanie Downing’s work on how Belfast, Ireland documents the Troubles alongside plans for the upcoming Lynching Memorial in Montgomery, presented by Evan McMullin of Alabama’s Equal Justice Initiative.

“Sol has so many of his own stories to tell,” King says. “He sees too many divisions in society. He feels strongly that there’s not enough emphasis on the roles of public education, public institutions. He believes in religious values of any kind; he believes in community. He wants to help achieve excellence for everybody, because he’s lived that. I know he feels very blessed, and I know he credits Rita for his worldview. He will tell you that without her, he wouldn’t be who he is—that she was better and smarter than him. Together they pursued a life of love and learning, and I’m so proud that we get to honor them both with our work in the department.”