Physics alumna Christina Richey has built a successful career in the competitive, and mostly-male, field of planetary science. 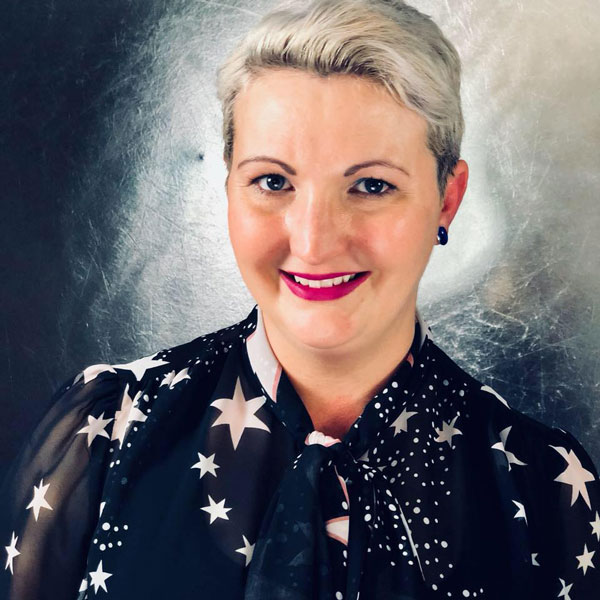 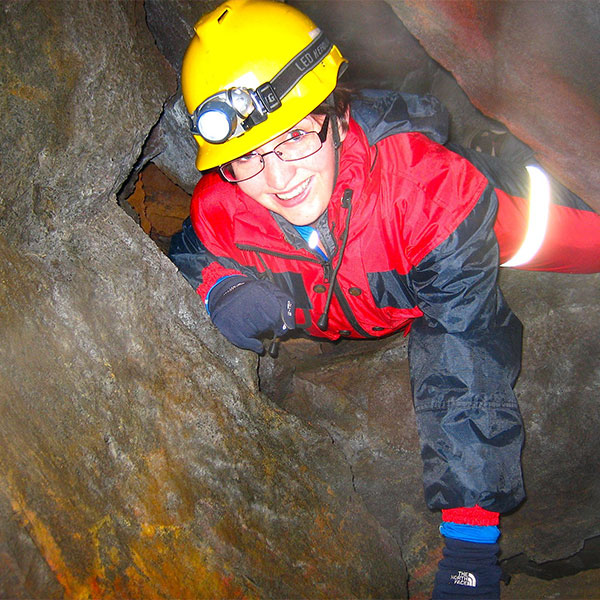 Growing up in East Liverpool, Ohio, Christina Richey didn't know very many astrophysicists. In her small working-class town on the Ohio River right where Pennsylvania, West Virginia, and Ohio meet, she had few models of what a research career could look like. “It was the Appalachia,” she says.

She liked science, so she majored in physics at nearby Wheeling Jesuit University, graduating in 2004. But it didn’t have the broad science platform of a larger institution. “It was a great school, but it was a small school, and it had limited research opportunities,” she explains. “I found out about the Research Experiences for Undergraduates (REU) program at UAB my junior year, and so I came to Birmingham and I just fell in love with UAB and the Physics department.”

The REU program, funded by the National Science Foundation and directed by Associate Dean and Professor of Physics Dr. Yogesh Vohra, provides a 10-week, hands-on research experience for undergraduate students. During the program, participants work in the labs of some of UAB’s best scientists to conduct research that will contribute to the work already being conducted in the labs.

During the REU program, Richey worked with former UAB Physics professor Dr. Perry Gerakines—who is now at NASA’s Goddard Space Flight Center—to study ice in the outer solar system. “I was doing graduate-level research for an entire summer,” she says. After seeing what the field of astrophysics could offer and knowing she wanted to continue her research, Richey applied to several schools with astronomy programs. But she ultimately decided that UAB was where she wanted to be. “I knew it was what I needed,” she says.

Richey made the decision to pursue a master's and doctoral degree in physics rather than specialize in planetary science or astronomy.

And that was in large part because of the relationships and guidance she received from faculty members in the Department of Physics. “A physics degree is flexible and applicable to a number of fields,” she says. “I knew I would be hirable in planetary science, but if that didn’t work out, I could find any number of other jobs with my degree.”

She says the relationships she built in the department helped her plan her next steps through graduate school and into her career.

“The general community in the Physics department was just fantastic; everyone was really supportive,” she says. “Right from the beginning of my graduate work, I knew I would do well; it was just the right environment. Dr. [Ryoichi] Kawai was a huge influence on me, and so was Dr. [Renato] Camata, who had a big service aspect to his worldview, and that was so important to me coming from a Jesuit school.”

As Richey worked through her graduate program, she also came to realize that, just as she didn’t want to limit her degree to astronomy, she also didn’t want to limit her career to laboratory research. “I never wanted to be a tenured professor,” she says. “I was really into project management, government relations, business modeling—all kinds of things that weren’t traditionally ‘physics.’ I had an advisor who really supported my desire to have a non-traditional career, and I am so glad I didn’t have that boxed-in reality that so many graduate students have.”

UAB Physics faculty members empowered Richey to follow her interests even while working on advanced science. “Dr. David Hilton was another huge influence on my career,” she says. “He was arriving at UAB right when I was finishing my Ph.D. and was very supportive of me from the beginning. I always knew my career path wouldn’t be the same as other people. With faculty help, I was networking at conferences and even taking a business class when it interested me. Dr. Camata said, ‘I feel like you’ll be a senator one day,’ and that really summed up my broad interests. I was not a traditional physics student and UAB really let me pursue the path that was right for me.”

After completing her Ph.D., Richey began an 18-month post-doc at the Goddard Space Flight Center in Maryland, where she concentrated on astrophysics, specifically how water adheres to dust grains in space, and how that informs our understanding of stars and how they form. “I noticed even then how I wanted to be out of the lab a lot,” she says. “I worked on education and public outreach programs for the James Webb Space Telescope, which is the next Hubble and will launch next year. I was the president of the post-doc association. I started blogging; I just got involved in so many things in addition to my research.”

She got so involved, in fact, that she almost missed her window to find a job with NASA, a dream she had held since her first year in graduate school. “I had told my advisor at UAB that I wanted to be at headquarters in 20 years, but when a funding situation almost shortened my post-doc position, I realized the job opportunities were becoming really slim, really quick. I had missed all of the Congressional deadlines, and I just went to my car and cried. But the next day, I started looking at contractors working with NASA, and I ended up as a contract program officer with Smart Data Solutions, and then with Arctic Slope. Basically, I went from thinking I was going to be unemployed to jumping ahead about 20 years in my career.”

As a contractor, Richey worked at NASA headquarters for five years and ran programs that distributed grant funding to Principal Investigators at universities across the country. “I wasn’t on the review panel, but I was the person who gathered and organized those panels of experts,” she says. “I was the person the community contacted—the one who handled the administration and business management.”

Richey says she loved the work, but after five years serving as a Deputy Program Scientist and a Deputy Science Advisor for Research and Analysis (R&A) she says, “There was no place up for me to go, and I wanted to try something different.”

In February 2018, Richey took a position as a Research Technologist and Scientist with NASA’s Jet Propulsion Laboratory at the California Institute of Technology. There, she helps prepare grant proposals, an internal process that is painstaking and multi-layered. “I bring an important perspective to the team as a former contractor at HQ,” she says.

She’s also a Project Staff Scientist on the Europa “Clipper” Mission, which will send a powerful spacecraft to Jupiter’s moon Europa sometime in the early 2020s to collect data and do extensive research. “Europa is the second-most-likely candidate site for life in our solar system after Earth,” she explains. “It’s covered in an icy shell that’s a few kilometers thick over what planetary scientists think is a liquid ocean. Back at UAB, I worked on ice, and during my post-doc, I worked with a federal relations group trying to get a mission to Europa funded. Add to that my mission experience from HQ…I am responsible for coordinating different groups and different science, so this is a perfect fit for me.”

Richey says the Clipper will travel in intricate orbits in the Jupiter system, but the orbits have to be carefully calculated since Jupiter’s magnetic particles rain down on everything around it, and would do damage to the Clipper. “It will have to come close to Europa to collect data and then kick back out further into the Jupiter system,” she says.

Throughout her academic and professional career, Richey has championed the cause of female scientists in a field that has been notorious for harassment and abuse. “I don’t have a degree in a social science, but over the years I have become something of an expert on this topic, particularly harassment in STEM workplaces," she says. “After an incident when I was a post-doc, I remember really having to think, ‘Is it worth losing my job over this?’ I was so powerless back then, and also so fed up. But I just decided to get up at a women’s lunch—we were always relegated to the women’s lunch—and start a community discussion on the topic in planetary science. I felt like I was screaming into the void then, and occasionally still do. But we’re making progress.”

She also helped run a survey and study with three other social scientists and astronomers, including anthropologist Dr. Kate Clancy at the University of Illinois, to explore how hostile the work environment was in planetary science and astrophysics. “Not surprisingly it’s bad, really bad. 39 percent of respondents said they were verbally harassed, and 25 percent said they felt unsafe in the workplace because of their gender.” Her work led to a Career Service Award from the AAS Division for Planetary Sciences (DPS) (“I can say I’ve won the same award as Carl Sagan,” she says proudly), which Richey says she accepted only if the DPS would agree to let her make a presentation on the prize stage. DPS agreed, but then the story about harassment charges leveled against renowned University of California, Berkeley astronomer Geoff Marcy broke in national media. The Marcy story exposed more of the harassment in the field of astronomy and planetary science than any single ‘harassment 101’ speech by Richey would.

“So, I ended up getting very personal with the crowd, in addition to showing the data”, she says. “A lot of men just didn’t know these things were happening around them. People only knew about a few instances anecdotally, that’s why the study data was so important. It’s hard to ignore when you start to realize these numbers are the same people sitting in the room with you.” 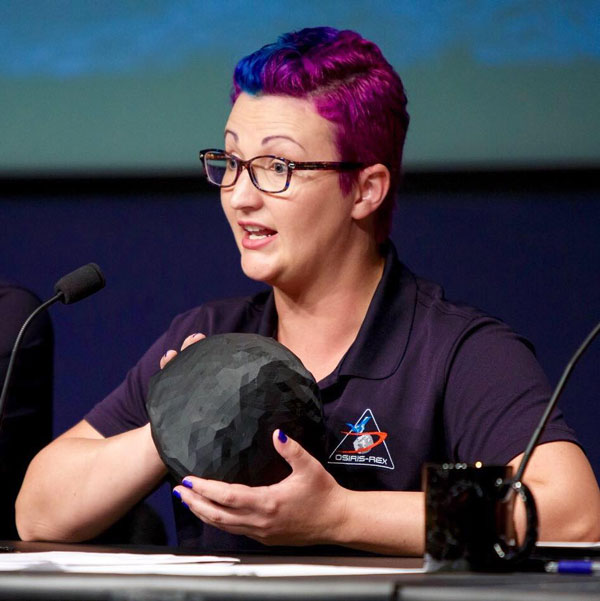 Today, as the country continues to grapple with these issues after the #MeToo movement exploded into the cultural consciousness, Richey says she’s encouraged.

“We’re making progress. We have to allow the system to fill with diversity. We have to welcome these young people into the sciences who are coming in with their eyes open. They’re less tolerant than we were; they’re getting proper harassment and bystander training. And that’s occurring more now because more women are in positions of power. Too many times I’m the only woman in a room, or my black colleague is the only non-white person in the room. But that game is changing now and it needs to continue to improve.”

Even the Hidden Figures movie about black women working as mathematical “computers” at NASA during the Apollo missions of the 1960s helped make an impact. “It was important because it made the conversation about women and gender inequity popular. I saw one of my heroes in Katherine Johnson on the stage at the Academy Awards and cried at realizing just how big that moment was for my field, and for women of color in STEM.” she says.

Richey, who received a Trailblazing Alumni Award from the College in 2016 and a Rising Star Award from the National Alumni Society in 2017, loves UAB and sees only potential for her alma mater. “I see a world of opportunity for UAB. It is the capital of the economy for Alabama and its research is world-class. My hope for UAB is that it would embrace its opportunities and run with it.”

She also has hopes for her colleagues in planetary science as they continue to advocate for safe and supportive work environments for their peers. “If there’s an opportunity for us to be the standard of excellence in this, why wouldn’t we?”