Department of Foreign Languages and Literatures

Dr. John Maddox, an assistant professor of Spanish in the Department of Foreign Languages and Literatures, has published, “Challenging the Black Atlantic: The New World Novels of Zapata Olivella and Gonçalves,” (Bucknell University Press). The book is Maddox’s first literary criticism.

Dr. John Maddox, an assistant professor of Spanish in the Department of Foreign Languages and Literatures, has published, “Challenging the Black Atlantic: The New World Novels of Zapata Olivella and Gonçalves,” (Bucknell University Press). The book is Maddox’s first literary criticism.

We talked to Dr. Maddox about his research and how these novels, not well known outside of Latin America, are actually broadly relevant to the issues of race, identity, and justice, with which we continue to struggle in the U.S. 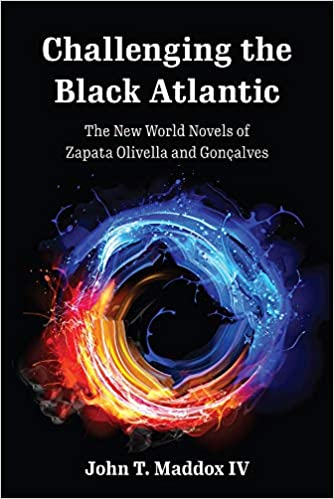 Summer Guffey: What is your area of research and what inspired your pursuit of that subject?

John Maddox: I specialize in Afro-Latin American literature and culture. My areas of focus are the Hispanic Caribbean and Brazil, which also includes the Caribbean coast of Colombia. My subspecialty is contemporary historical novels about slavery, particularly those by Black Latin Americans. I was inspired by the fact that, unlike the United States, there are virtually no slave narratives in the region. The general silence in literature – and in many approaches to history – creates a desire in Afro-Latin American authors and critics to re-create or imagine the perspective of the enslaved through historical fiction. Thankfully, we live in a time when the academy is attempting to overcome its Eurocentrism and seek out what, at first, seem like the lost voices of the past both through archival research and historical fiction.

SG: How does this book relate to your area of research and other publications of yours? Is this your debut book?

JM: “Challenging the Black Atlantic” compares the most important novels of Afro-Colombian Manuel Zapata Olivella and Afro-Brazilian Ana Maria Gonçalves. Both works are monumental sagas: They total over 1,700 pages. As I read, I noticed that their work encompassed a much greater area and timespan than the most popular model of African diaspora history, Paul Gilroy’s “Black Atlantic,” hence the title. Gilroy’s book was published in 1993 and popularized an interpretation of African-American writers that wrote outside the United States, making his “Black Atlantic” a term critics use to describe the study of Black culture in a post-modern, trans-national framework—but it has limitations

SG: What do you hope to accomplish with this book?

JM: I hope every reader knows that, by far, most Black people outside of Africa live in Latin America, not the United States. Both Zapata and Gonçalves display unique versions of W.E.B. DuBois’s notion of Black consciousness (a combination of Western and non-Western beliefs), the key theoretical concern of Gilroy. Both authors display a greater emphasis on women and even LGBTQ characters than Gilroy. The novels matter for the future, since they show that Black people have influenced Latin America throughout its past and, certainly, will do so for years to come.

What does the prefix “Afro-“ mean in academic scholarship?

“In 2000, the UN Human Rights Council hosted a conference that united Black leaders from throughout the Americas (the U.S. did not attend). There, the terms, ‘afro-descendant’ and ‘afro-descent’ were agreed upon because they emphasize a person’s cultural background over their skin color. They also link disparate movements under a framework that promotes human rights and anti-discrimination.

In 2011, UNESCO created the Year of Afro-Descent and, eventually, the Decade of Afro-Descent. We likely would not have as many opportunities to know about ‘Afro-Latin America’ without these UN efforts. And consequently today, you see many conferences and publications working to preserve Afro-Latin American history and culture and decry continued racism.”

SG: How do the experiences of the people in this book apply to society and events today, both in the U.S. and globally?

JM: The authors deal with some of the most vital issues of our time. Police brutality toward and mass incarceration of Black people are discussed in Zapata’s novel, which includes the United States. Both authors look to the United States for inspiration in their struggles in Latin America. Of course, their setting is different. Generally speaking, the dominant outlook in Latin America is that slavery was not as brutal as the United States and that, since virtually everyone is mixed-race, there is no racism in the region. These authors show the violence of slavery in the past and the continuation of racism. Their novels are relevant today throughout the Americas, with implications for Africa and Europe, since all three regions became tumultuously intertwined by colonialism, which continues today in different forms.

SG: Who is the intended audience?

JM: While my primary audience is literary and culture critics of Latin America, I hope scholars and students in other fields will read it as well. Since the novels are long, I include useful summaries of the plots and virtually everything written on the works, so that should help graduate students and those who want a general introduction. Monolingual English speakers in African American studies can access Gonçalves’s text for the first time, since it has not been translated. Scholars in English, literature, history, cultural anthropology, sociology, and religion will also find it useful.