When it comes to being conservative, black people have been mislabeled, according to a new book by UAB professor Angela Lewis.

When it comes to being conservative, black people have been mislabeled, according to a new book by a University of Alabama at Birmingham (UAB) professor.

"There is this overarching belief that African Americans are extremely liberal and support liberal ideas like unlimited welfare assistance and an open lifestyle," said Angela Lewis, Ph.D., associate professor of government. "This characterization of black people is incorrect."

Lewis recently penned Conservatism in the Black Community: To the Right and Misunderstood as part of the Routledge Series on Identity Politics. The book looks at how conservatism among black people—from slavery up to today—is different from that of whites. In the book, Lewis categorizes conservatism in the black community into four groups, and supports each with longitudinal data.

"When you think of black conservative pundits who are always on TV and conservative everyday black people, they are not the same," Lewis said.

More than one-third of the black population identifies themselves as conservative, she said. Of that group, however, more than 90 percent support the Democratic Party, considered a more liberal political group.

Lewis found this interesting and set out to find out why. She conducted focus groups in Birmingham, Chicago, and Atlanta. She found that when African Americans talked about conservatism, they rarely mentioned politics. Instead, they talked about their lifestyle, morals, and values. And they were able to compartmentalize their views on lifestyle in order to support a political party they feel is more compassionate toward marginalized groups and the poor. 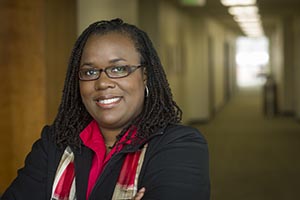 Often, the pundits speaking for black conservatism are aligned with the Republican Party and do not support issues like affirmative action, a policy that the typical black conservative does, according to Lewis.

"The media needs to have more than these pundits representing conservatism because they are not representative of black conservative thought," she said.

Lewis' hardback book is available for $125 here; the e-book can be purchased at amazon.com.