“Cynthia is driven by a passion to help those facing medical challenges, and this passion has been the single animating force of her personal and professional life,” said Alison Chapman, associate professor and director of undergraduate studies in the Department of English. “Her passion and energy have had extraordinary results.” 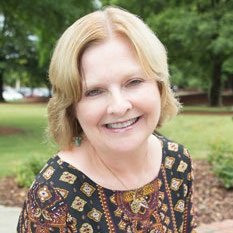 Cynthia Ryan. Photo credit: Jared Bash. Ryan’s journey started with a newsletter from the Church of the Reconciler in Birmingham, which addressed cancer among the homeless population. She began working with the church and talking to homeless men and women about how they coped while going through cancer treatments. Ryan initially conducted the research to use in a magazine article, but became more personally involved with time.

“Cynthia realized that she had to abandon the stance of the outside, detached researcher who helps only through her writing,” Chapman said. “Instead, she began donating more and more of her time and resources to helping this neglected population get through their daily lives.”

Not only does she tell her candid story of survival through her blog Cancer Hits the Streets, she also writes stories about female survivors from around the world, championing their courage.

For her efforts, Ryan received the 2014 Odessa Woolfolk Community Service Award during the annual Faculty Awards Convocation April 2. She was selected for the honor by her peers, who have responded to her leadership, ingenuity and professionalism through the years.

Ryan previously had published articles about the ways cancer is understood in academic discourses and popular media, but her article in Cancer Today about being homeless with cancer has been called ground-breaking. For the article, she won the Clarion Award — the Pulitzer Prize of the communications word, honoring the highest forms of clear, concise communication about contemporary social and cultural issues.

CBS News turned the article into an evening news feature, and subsequent references in hundreds of national and international news outlets followed. As a result of the news coverage, 100 percent of the men and women featured in Ryan’s article received housing.

“Through her community service, Cynthia Ryan has represented herself and her university in the best possible spirit and traditions of community service,” said Mark Strassman, correspondent for CBS News. “In a city famous for its place in civil rights history, giving her an award named after Odessa Woolfolk is both fitting and well-deserved.”

Ryan parlayed the momentum from the news stories by co-founding a program call Street Smarts with the North Central Komen Foundation to educate homeless women about cancer. Information about breast and cervical cancer-detection is presented by nurses from Cooper Green, and two homeless women who have survived stage 4 breast cancer share their stories. The program has been featured in several news segments.

“Her initiative is not just changing lives — and without a doubt, saving lives — in Birmingham, but is now a model of health education for the homeless in communities far beyond the city,” said Jessica Gorman, executive editor for Cancer Today.

Ryan is seen as the de facto medical liaison for many of Birmingham’s homeless population living with cancer.

“She takes them to their doctor’s appointments, and she helps them understand the medical language of doctors that can be so alien to people who have spent a life on the streets,” Chapman said. “She helps them fill their prescriptions. She drives supplies donated from Alacare to burned-out neighborhoods to help those with bladder cancer. She goes into abandoned warehouses and hunts under interstates to find homeless friends of hers who need to get to chemotherapy. She gives them birthday cards and makes sure they have enough food.

“Cynthia is the real thing: a faculty member whose community service is not an adornment to a scholarly career but the driving force of that career,” Chapman said.