Andrew Hudgins, author of the poetry collection "A Clown at Midnight," describes Adam Vines and Allen Jih’s “According to Discretion” as “a series of relay races, each poet adding a burst of speed as the baton is passed on and then passed back with dizzying panache...” 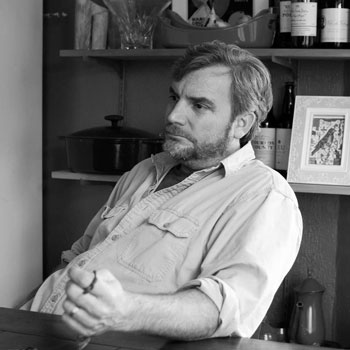 Adam VinesVines, a native Southerner and outdoorsman, and Jih, a Las Vegas aerialist, met during graduate school at the University of Florida. In their second year they became fast friends, poker buddies, and collaborating poets.

After graduate school, Jih eventually became a professional aerialist, first performing on "America’s Got Talent," and Vines remained in theworld of academia as a professor. While they took very different paths, the partnership continued, challenging their abilities, comfort zones, and poetic form.

This is their first serious collaborative project, and Vines says the idea developed naturally, with no intended outcome. “We weren’t expecting to really write poems,” says Vines. “They were just exercises to challenge us more than anything.”

Jih first approached Vines because he’d felt stuck, as if his writing had been on a continuous loop, and Vines felt the same about his own work, admitting he couldn’t break free of imagery, language, and environments he knew so well. Both Jih and Vines used the project to write “fresh.”

Content restrictions, such as line length or syllable count, created a fun dynamic during the writing process. Sometimes specific settings were chosen -- like the belly of an 18th century ship, a cab, or a diving board outside a hotel. The poets used the limitations to challenge each other within those established boundaries. 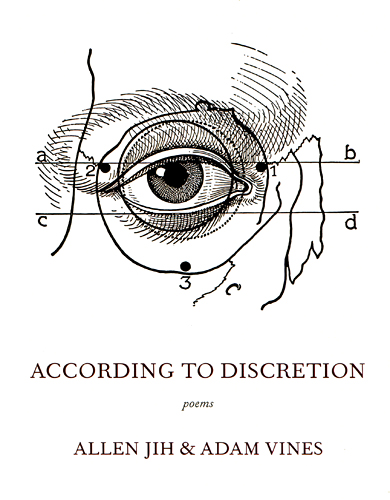 “We left the poems mostly the way they were when we wrote them,” says Vines. “And we started sending them out to journals just on a whim and quite a few editors seemed to like our little collaborative critters … Then we sat down one day and collected them and recognized them as a collection of poems.”

The collection wasn’t formed with any common theme or subject matter in mind, but the poets agreed that many of the works seemed to convey a desire to be discrete.

“When you think about discretion, I think a lot about decorum, and how we reside within these certain avenues of decorum,” says Vines. “Sometimes we rail against that decorum. Sometimes we’re more subversive.”

“I think many of the poems are railing against decorum and discretion,” he says. “They’re trying to provide a voice that’s unapologetic. That is willing to say what needs to be said and can be a bit shocking.”

According to Jih and Vines, their next project will be a collection written entirely in trimeter.

For more information about UAB’s English Department and programs, see the department's website.
Kayla McLaughlin is a 2015-2016 UAB Digital Media fellow and an English and Communications student with a concentration in creative writing.