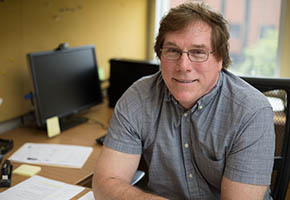 When asked what being a peace educator means to someone of his caliber, Fry disclosed his three ideas for realizing peace (as given during his acceptance speech but in no particular order here): hope, vision, and interaction.

Fry says vision emerges concurrent to imagining a world without war or fear. He references Deganawida, who united six American Indian nations and consequently eliminated violent conflict among what would become the Iroqouis Confederacy. Fry argues that without imagination, one is limited as to how one believes a world must operate. Fry cites Gandhi and Jean Monnet, individuals who tapped their creativity to not only envision but help foster a larger peace state.

His idea for attaining peace through an integrated perspective exists in a plethora of configurations: providing opportunity for group discussion, delving into the literature so that the “baggage” — or cultural relativism — that we each carry doesn’t expand past a healthy ethnocentrism. Fry, who has lived with peaceful societies in Mexico and has educated on a university level in Finland and across the United States, recounts his own experiences assimilating into other cultures.

Fry is among the most natural conversationalists in his discipline, witticisms abstained, and it is this affability that invites notice from more than just awards committees. Yet when he confides how he’s struggled with the intellectual stymies that inevitably challenge an anthropologist, he reveals the challenge in pursuing peace.

He prescribes a leveling up of our ability to recognize the power of hope through such means as “culture shock” workshops, saturation campaigns for peace featuring real-life evidence of its prevalence and continued success, and promoting Cultural Anthropology 101 in a pre-college context.

Fry says “culture shock” is anthropology’s gift. Per me, peace is the reality of hopeful anticipation met and of consequent contentment exceeded following the gift’s unwrapping.Sasha Mitchell is a graduate student, managing editor, and anthropological liaison in the Department of Anthropology.