Print media artist Rich Gere comes to UAB from the Department of Art and Design at Texas A&M University-Corpus Christi. 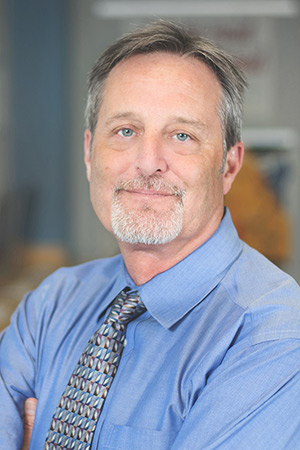 Photo: Edgar De La GarzaRich Gere has been named chair of the Department of Art and Art History. He will begin his new position on August 15, 2019.

After starting a career in finance and marketing, Gere co-founded a graphic design firm in Knoxville in 1998. While working as a professional designer, he taught courses at community colleges in East Tennessee and Southwest Virginia; he also helped develop an adult education program with fellow faculty members at Tusculum College in Knoxville. In 2001, Gere joined the faculty as a professor of foundations and painting in the School of Fine Arts at Savannah College of Art and Design (SCAD) at their Savannah campus; in 2002, he transitioned to professor and director of printmaking at SCAD, Savannah. From 2006 to 2013, Rich was professor and founding chairperson of print media, as well a director in the School of Fine Arts for SCAD's new Atlanta campus. In that role, he was responsible for developing the B.F.A, M.A., and M.F.A. programs in print and digital media. In 2014, he was named professor and chairperson of the Department of Art & Design at Texas A&M University-Corpus Christi.

As a print media artist, Gere explores alternative photo processes; works of paper, sculpture, and installation; and his work is currently centered around border issues and the ecology of South Texas. As a lecturer, artist, and co-investigator, he has been the recipient of numerous grants and awards, including funding from the Rauschenberg Foundation and a multimillion-dollar grant from the U.S. Health Resources and Services Administration (HRSA) which currently supports his research on integrating the visual arts as pedagogy into the nursing curriculum.

As an artist, he has appeared in more than 200 juried, solo, and group exhibitions, including recent exhibits at the El Paso Museum in El Paso, Texas; the Museo de Arte de Ciudad, Juarez, Mexico; SCOPE Basel, Switzerland; ArtHelix Gallery, Brooklyn, New York; and at the Toolbox Gallery, Berlin, Germany. His artwork appears in a number of public and private collections, and he is represented by Marcia Wood Gallery of Atlanta.

We look forward to working with Rich. We are also deeply grateful to Jessica Dallow, who has served as interim chair since 2017 and will return to the art history faculty.