Dr. Michele “Mike” Wilson passed away May 30, 2021. She retired as associate professor of sociology at the University of Alabama at Birmingham (2008) and continued working for the university for several years afterwards. 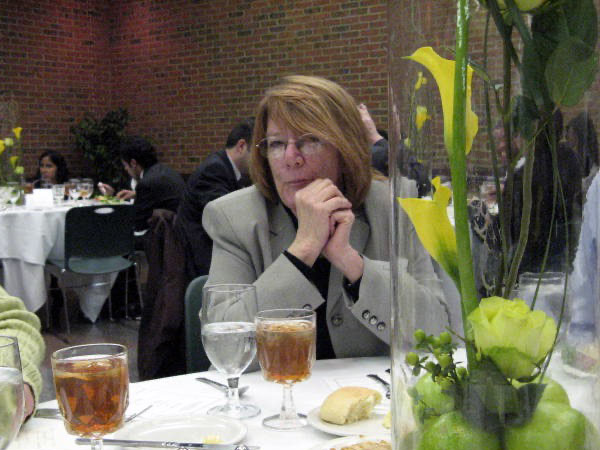 Dr. Michele “Mike” Wilson in 2007 at the UAB Diversity Awards Dinner. Photo by Patricia Drentea. Dr. Michele “Mike” Wilson passed away May 30, 2021. She was born December 8, 1942, in Puerto Rico to a military family. Her parents were also politically active, which is where she inherited her activist genes. Dr. Wilson earned her doctorate degree in sociology from the University of Connecticut in 1978.

She retired as associate professor of sociology at the University of Alabama at Birmingham (2008) and continued working for the university for several years afterwards. She had a large following of students and won Outstanding Teacher of the Year at UAB. She taught Introduction to Sociology, Social Problems, the Sociology of Gender, and Deviance. Dr. Wilson was a scholar/activist, and she started and directed the Women’s Studies Program at UAB. Dr. Wilson’s research was on abortion. She also studied government leaders and activism in government, the civil rights movement, and abortion rights. In 2006, she received the UAB President’s Diversity Champion Award for her tireless work in equality.

Dr. Wilson was an active member of the Southern Sociological Society and was known to bring groups of undergraduates to the meetings. She also advocated for female graduate students in the 1980s through the 2000s — a period of time during which she went from being the only female professor in the Department of Sociology, to retiring alongside equal numbers of male and female professors in the department.

She was committed and steadfast in her activism and courageous in her fight for equality for women. She headed the local chapter of the National Organization for Women (NOW) and escorted women to and from Planned Parenthood and across protest lines. Also, she was instrumental in setting up Birmingham's suicide prevention call center. Together with her beloved husband Jack Zylman (deceased 2013), they worked tirelessly for the civil rights movement and in promoting racial equality in Birmingham. She is survived by her brother Rick Wilson and sister-in-law Hope, of Florida, and cousins, nephews, and nieces. She is also survived by stepdaughter Alicia Di Giovanni and grandchildren of San Antonio, TX.

The Department of Sociology mourns her death. She was brave and ahead of her time. Those who wish to contribute in her name can give to the Dr. Michele Wilson and Professor Becky Trigg Endowed Award, which gives a scholarship to a deserving undergraduate who is academically successful and dedicated to activism and/or gender equity. In lieu of flowers, the family respectfully requests any memorial gifts be made to the endowed award. Gifts can be mailed to UAB Gift Records, AB 1230, 1720 2nd Avenue South, Birmingham, AL 35294-0112 or made online at go.uab.edu/mikewilson.