If you step into a class taught by John Mayer, Ph.D., professor in the Department of Mathematics, you will hear very little lecturing. Instead, you are likely to witness an engaging environment where students do most of the talking. 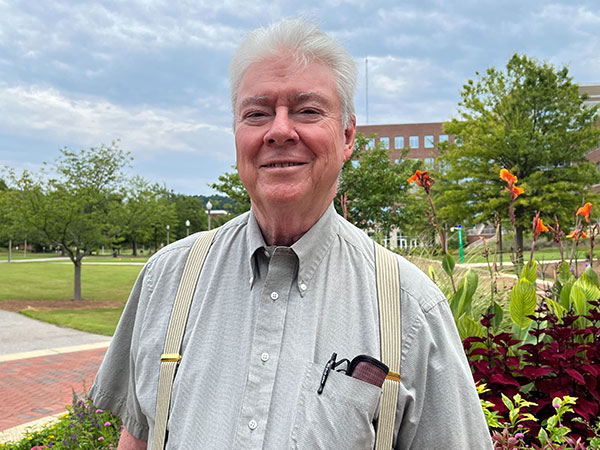 John Mayer, Ph.D.If you step into a class taught by John Mayer, Ph.D., professor in the Department of Mathematics, you will hear very little lecturing. Instead, you are likely to witness an engaging environment where students do most of the talking.

“A 20-minute lecture from me would be a pretty long lecture in a classroom,” said Mayer.

His passion for cultivating dynamic classrooms emerged during his time as a mathematics Ph.D. student at the University of Florida (UF). His major professor at UF, Beverly Brechner, Ph.D., embraced inquiry-based learning—a pedagogy where students often speak more than their professors. It was a fresh approach that catalyzed his interest in topology.

“[Topology] is the understanding of place or space. It’s more flexible than geometry,” said Mayer. “I was drawn in by the way in which I learned topology [inquiry-based learning]. It was partly the subject matter… and it was partly the way it was being taught.”

As Mayer’s knowledge of topology deepened, he sought a future career in higher education where he could work alongside colleagues with similar research interests. Eventually, he gravitated to UAB because he knew Lex Oversteegen, Ph.D., a faculty member in the Department of Mathematics who was also interested in topology. It was a perfect match.

When Mayer arrived on campus in 1984, he was a bit surprised by UAB’s class schedule. In the early 1980s, students attended two-hour classes twice a week, resulting in lengthy lectures and, at times, disinterested students. Mayer immediately sought ways to avoid disengagement with his students, so he circled back to inquiry-based learning.

Through this approach, Mayer limits lectures to a small fraction of his classes. Instead, students spend most of the time learning from each other via group projects and presentations.

“The idea is to do this in an atmosphere of mutual respect,” said Mayer. “I believe that inquiry-based learning is for everybody… especially for those who are afraid of mathematics. The process—and having a respectful community in which to do it—can help build their confidence.”

Mayer’s commitment to inquiry-based learning is emblematic of a broader strategy that he embraces: identify effective practices being leveraged elsewhere and collaborate with others to apply them at UAB. Hence his motivation to plan and implement two groundbreaking programs at the university: the Mathematics Fast-Track Program and UABTeach.

Through the fast-track program, students can earn both a bachelor’s and master’s degree in an abbreviated time period (often five years or less). In the early 1990s, Mayer had witnessed other schools leveraging the model, so he decided to adapt it for UAB with the goal of retaining strong mathematics undergraduate students. He and his collaborators launched the program in 1993, and, within a couple of years, they received a grant from the National Science Foundation to support and expand the work.

“I believe the Mathematics Fast-Track Program was the first combined bachelor’s/master’s program [at UAB],” said Mayer.

In addition to the fast-track program, Mayer collaborated with faculty and staff in the College of Arts and Sciences and the schools of Engineering, Education, and Public Health to conceive of and implement a program to expedite the process by which students become secondary STEM teachers. Again, Mayer looked for examples of effective programs at other institutions and discovered UTeach at the University of Texas at Austin.

In 2014, Mayer—along with his collaborators—used the UTeach model to develop and launch a program called UABTeach to reduce the course load for students who aspire to become STEM teachers. The goal was to maintain academic rigor without requiring students to earn two majors. It was an innovative strategy that received a $1,450,000 grant from the National Mathematics and Science Initiative, as well as over $2.75 million in local philanthropic support from several local foundations including the Community Foundation of Greater Birmingham.

“The motivation was to make it easier for students to decide to become teachers,” said Mayer.

“Apart from the Fast Track program, I’m most proud of getting UABTeach off the ground.”

Although Mayer celebrates his past accomplishments at UAB, he’s also quick to look forward and seek out new approaches to make mathematics accessible for all students. With that goal in mind, he plans to launch a new course in Fall 2022 entitled, “Linear Algebra: Data and Models.” The course, MA 160, is designed to support students who may face challenges with calculus.

“Linear algebra makes calculus with several variables much easier,” said Mayer. “Linear algebra can be more widely applied in the age of computers. It has implications in data science and in mathematical modeling. The idea that someone could learn linear algebra without first having taken calculus was attractive to me for the course I’m designing now.”

Students who are interested in taking the course can learn more via the UAB Course Catalog.

When asked to describe his approach to innovating in the classroom and on campus, Mayer jokingly says it’s similar to fitting a square peg in a round hole. Thankfully, throughout his time at UAB, he’s never let inflexible shapes and barriers stop him from trying new things that will benefit his students.