Selected by peer review, rather than faculty (as had been done in the past), the two winners were scored on content, delivery, visual aid and preparation. 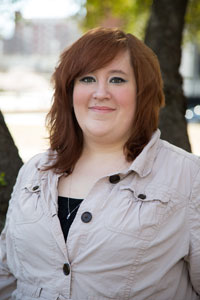 Nicole Watkins. Photo by Jared Bash. Nicole Watkins, who began as an undergraduate at UAB in 2007 and is due to finish her MA this summer, won second place in her session for “When Reasonable People are Alarmed: Riot and English Identity in the Eighteenth Century.” Her research examines why English citizens rioted in some circumstances but not others.

“I looked at two events: The Excise Crisis of 1733 and the British perspective of the French Revolution,” Watkins explains. “In these cases, people were influenced by whether reforms were perceived as French. The Excise Crisis was really a xenophobic reaction to a French tax that would be imposed on the British people, although it was just a rumor; there was never any tax imposed. During the French Revolution, English Corresponding societies proposed reforms based on the French model, yet despite an oppressive English government, people refused to riot on behalf of a cause perceived to be French.” To illustrate these events, Watkins used 18th-century British political cartoons from the Yale Lewis Walpole Digital Images Collection in her presentation.

Watkins, who is a teaching assistant for Pamela King, also notes that the issues facing the English in the 18th-century are not too different from what our society is debating today. “This is an exploration of the ways liberty and security are related,” she says.

Watkins was guided in her presentation preparation by history professors Dr. Carolyn Conley and Dr. Colin Davis. She plans to apply for PhD programs in the fall, and her winning paper will be published in the Vulcan Historical Review. 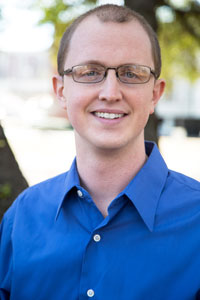 Kyle Besing. Photo by Jared Bash. Kyle Besing, who is on track to complete his PhD in mathematics in the spring of 2015, won first place in his session for his presentation, “Modeling Disordered Quantum Systems.”

“This is some early work that I’ve done on what will be the result of my dissertation,” Besing explains. “I’m looking at localization, which is used in quantum spin systems and other applications. If something is localized, then you don’t have the information transport that may otherwise occur. An electron can’t pass freely through the material; it’s not a conductor.”

Besing, who first came to UAB for his as a master’s student in the fall of 2009, says that for mathematicians like him, the task is to show the paths to localization. From there, physicists and computer information scientists can determine the value of localization and next steps. “You have to check the boxes,” Besing says. “My presentation is about one of the very early check boxes. I did a good bit of numerical work to create graphs that I used in my talk at Graduate Student Research Days.”

Besing says he is exploring opportunities in both academia and industry, but “I really want to be a professor. I love conveying mathematical ideas and motivating students. As I’ve continued my studies, I’ve always asked myself, ‘Could I still explain this concept to someone at the undergraduate level?”

Although Besing has presented his research at other forums, this was his first time to enter a competition. But regardless of where he shares his ideas, he has one common denominator in mind. “I’m really passionate about conveying to people that you can do math,” he says.