The Value of a Political Science Degree

"The most valuable thing about my experience at UAB was the close mentorship I received from the faculty," said Logan Talbot, UAB class of 2011.

What is the value of a political science degree from the University of Alabama Birmingham?

"The most valuable thing about my experience at UAB was the close mentorship I received from the faculty," said Logan Talbot, UAB class of 2011.

"Many of my professors helped me find internship opportunities that enabled me to apply the principles I was learning in the classroom to real world situations. That experience is so crucial in today's demanding economy."

From Nursing to Political Science

"I met Logan when he was a freshman when he took my ethnographic filmmaking course," said Digital Media Director Rosie O'Beirne. "What struck me about him is that he seemed certain he was going into nursing. Through his freshman year, I noticed something different about him. Logan did a film about a halfway house for women who got out of prison. He engaged with this community in a way that I knew his passions were beyond nursing."

The diverse environment at UAB also allows students to find what's right for them. Logan found his passion in defending LGBT issues, even using his office as senator in the USGA to change the wording in the discrimination clause of the student bill of rights to include gender equality and expression. In his sophomore year, Logan changed his major from nursing to political science with a minor in digital community studies.

The professors at UAB understand that as well. Once a student finds what they are passionate about, an instructor wants to help guide them in any way possible.

"Logan wanted to know to what extent a law degree would help him, whether it would be more fun to jump right into politics or establish himself as a lawyer first," said Assistant Professor Robert Robinson. "[Talbot] took two classes with me: Intro to American Politics and Constitutional Law and the Bill of Rights. With some students, it's not just that they're bright, but they've figured out what they want to do and how they want to navigate the world. They're going to make stuff happen for themselves."

In 2010, Logan was one of 60 students in the country to be named a Truman Scholar. Logan was awarded $30,000 for his graduate studies and was also given an opportunity to network with other students from across the nation. Six other UAB students have previously earned the grant. 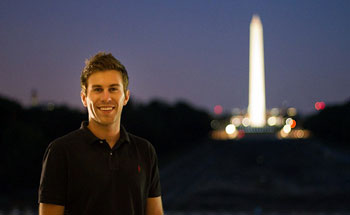 The Harry S. Truman Scholarship is for college juniors who show leadership potential and have an interest in the government or public sector service. The mission of the foundation is to provide students with financial support for graduate study, leadership training, and fellowship with other students who are committed to making a difference through public service.

After graduating from UAB, Logan was admitted to law school at the University of California, Berkeley, but still has strong ties to the Birmingham area. Working with the petition site, Change.org, Logan connected with students in Birmingham in order to repeal a law that forces schools to teach that being gay is criminal. The petition was started two months ago and currently has 91,965 supporters.

A Passion for Change

Logan won't admit it, but the success he had at UAB was a byproduct of his passion for making a change in the world around him, whether he's working behind the scenes to make his undergraduate university a better place or starting up an LGBT advocate group at Berkeley's Law School.

For Logan the value of his political science degree is that he was able to explore his interests and unlock his potential within the encouraging environment of UAB. Logan is about to start his third year of law school and is pursuing a career with the Consumer Financial Protection Bureau in Washington DC.

Shafiq Islam is a senior majoring in communications with a focus in public relations and minoring in international studies. An intern at UAB Digital Media, he's a writing specialist with interests in the web and social media.