Insights for all time

The legacy of Tinsley R. Harrison, M.D., extends far beyond the bust of his likeness displayed in front of the building bearing his name on University Boulevard. Harrison, an Alabama native, internist, and renowned educator, helped the Birmingham medical center rise to national prominence as chair of the Department of Medicine (DOM) and as acting dean of what is now the School of Medicine at UAB. His worldwide fame rests primarily on his book Harrison’s Principles of Internal Medicine, published in 1950, reprinted 16 times, and translated into 14 languages. It remains the single most-used and best-selling internal medicine text in the world. 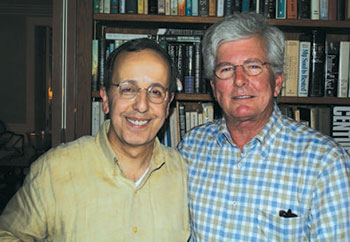 Gifts from George Karam (left) and Craig Coe (right) will help perpetuate the patient-focused legacy of Tinsley Harrison.Gifts from George H. Karam, M.D., chief resident in internal medicine in 1981, and Craig L. Coe, M.D., a 1980 graduate and member of the 1981 intern class, will ensure that current and future UAB residents receive a firm grounding in Harrison’s principles of professionalism. Their contributions have created the Legacy Endowed Support Fund for the Tinsley Harrison Internal Medicine Residency Program in the Department of Medicine. The idea for the fund surfaced at the DOM’s inaugural education summit in September 2011, where Karam spoke. “Because I’m on the American Board of Internal Medicine, I see the growing emphasis on what one colleague has termed the ‘mechanics of care,’” says Karam, head of the Department of Internal Medicine at the LSU Health Sciences Center in Baton Rouge. “This trend occupies much of the time physicians spend with patients and diminishes the time for mechanisms of disease. So I developed my talk around the example that Dr. Harrison set for medical education and how it could provide a roadmap to the future for the DOM.”

Karam says his appreciation for Harrison’s legacy increased during the process. “Through Dr. Harrison’s teaching, wisdom, and insight,” Karam says, “I came to the realization that gifts often become obligations to sustain.” Then he turned to his good friend Coe, now retired from his internal medicine practice in Dothan, Alabama. “I thought it would be fun to do something with Craig that might have enduring value,” Karam says. “As I reflected on all that I had learned about Tinsley Harrison, I thought we should try to ensure that future generations understand the multiple layers of influence that Dr. Harrison left.” The Legacy Fund supports programs and activities for today’s internal medicine residents designed to uphold Harrison’s principles, including an annual Legacy Dinner for rising third-year trainees. “We wanted to create special internal bonds at UAB,” Coe adds. “And we wanted to express our deep appreciation for the training we received at UAB.”