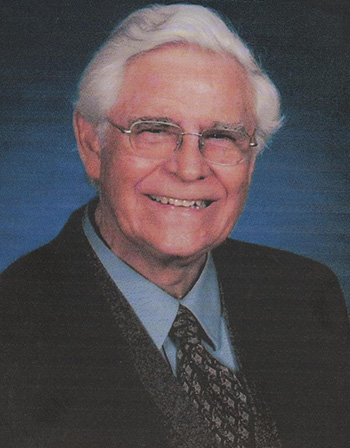 A memorial service is set for Saturday, Jan. 17, at 10:30 a.m. at St. Francis Xavier Catholic Church for H. Cecil Coghlan, M.D., retired professor emeritus in the Division of Cardiovascular Disease at the UAB School of Medicine. Coghlan, known as a beloved clinician and educator in his more than 36 years at the university, died on Tuesday, Dec. 23, 2014 after a long illness.

The family will host a luncheon afterward in the parish hall for friends, former patients and colleagues.


Coghlan established a reputation as a legendary teacher of medical students, residents and fellows, who remember not only his careful attention to the physical examination, but also his commitment to listening to each patient and taking time to understand their concerns. The annual award given in the Division of Cardiovascular Disease for teaching excellence is named in his honor.

“Dr. Coghlan was the kindest, most patient, and most compassionate physician that I have ever met,” said Robert C. Bourge, M.D., vice chair for Clinical Affairs for the Department of Medicine and former director of the Division of Cardiovascular Disease. “He was a great bedside teacher and role model for many generations of physicians at UAB, and also in his home country of Chile. In addition, he was able to very effectively share his knowledge with the international medical community through publications and lectures around the world. His wonderful professional example was one of the reasons why I entered the field of cardiology. He was my teacher and mentor as an intern, resident, fellow, and then junior faculty member. That mentorship continued when he was deputy director of the Division of Cardiovascular Disease during my 15 years as director of the division, and subsequently as an emeritus professor of Medicine at UAB.”

Coghlan, a native of Santiago, Chile, and the son of an English doctor, received his bachelor’s degree from the Universidad Catolica de Chile in 1950 and his medical degree in 1956 from the University of Chile Medical School, where he served as chief resident at Sewell Hospital. During that year as chief resident, Coghlan served as a translator for Tinsley R. Harrison, M.D., founding dean of the Department of Medicine at what would become the University of Alabama School of Medicine at UAB, during Harrison’s visit to Sewell Hospital. Harrison invited Coghlan to Birmingham as a visiting researcher and clinical fellow in cardiology.

Coghlan spent three years at the School of Medicine before returning to Santiago to serve in numerous research, teaching and clinical positions at the University of Chile Medical School. After more than 15 years in academic medicine in Chile, Coghlan was recruited back to UAB in 1973 and attained the rank of full professor in 1981.

He developed a particular interest in several aspects of cardiovascular disease, including mitral valve prolapse, congenital heart disease and autonomic dysfunction, attracting patients from across the state, region and nation. His dedication to his patients and taking time to understand their concerns exemplified his compassionate approach to patient care and made him an example for students, residents and fellows.

“Dr. Coghlan took care of a member of my family,” said Selwyn M. Vickers, M.D., F.A.C.S., senior vice president for Medicine and dean of the School of Medicine. “He literally transformed her life by making the diagnosis of dysautonomia when no one else could make heads or tails of her condition. He was a kind and gentle man, and a great clinician.”

Coghlan retired in 2008. He is survived by his beloved wife Mayte, their four sons – Harold, Leslie, Michael and Anthony— and seven grandchildren.

In appreciation for his many contributions to the school, colleagues and friends made gifts to establish the H. Cecil Coghlan, M.D., Endowed Support Fund in Cardiovascular Medicine, which assists the division in recruiting and retaining top-notch physician-scientists to further expand the School of Medicine’s clinical, education and research efforts in cardiovascular disease.

The family suggests that instead of flowers, memorial gifts may be made to St. Francis Xavier Catholic Church or to the Coghlan Endowment. Gifts may be made online or via mail: School of Medicine Development Office, FOT 1230, 1720 Second Avenue South, Birmingham, AL 35294-3412; vgloftin@uab.edu.