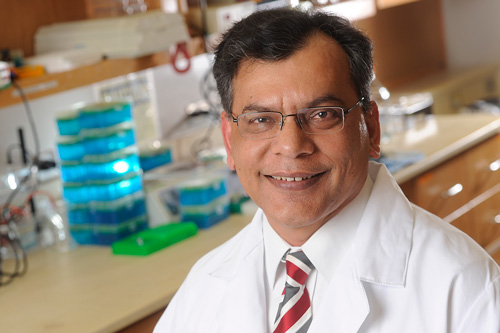 Keshav K. Singh, Ph.D., a University of Alabama at Birmingham expert on the roles of mitochondria in cancer, mitochondrial disease and aging, is one of 12 extramural researchers invited to a National Cancer Institute Mitochondrial Information Transfer Strategic Workshop.

Singh, who came to UAB in 2011, is director of the Comprehensive Cancer Center’s Cancer Genetics Program and a Joy and Bill Harbert Endowed Chair and professor in the Department of Genetics.

The closed-door, invitation-only workshop will examine the nature of mitochondrial information transfer both within and between cells, specifically how back-and-forth communication between the mitochondria and the nucleus fundamentally affects cellular function and how defects in this communication cause a number of human diseases, including cancer.

According to Michael Espy, program director in the Division of Cancer Biology at NCI, the goal of the meeting will be to identify where knowledge gaps and bottlenecks exist that may have hindered progress for the field.

“We will have lively discussions about the horizons for the field, rather than a series of boring talks on ‘what I did,’” Espy said. “It is a chance to really reach and explore the boundaries.”

Mitochondria were originally known as the powerhouses of the cell, but appreciation has grown about the vital role mitochondria play in information transfer between the 37 genes of these small organelles and the more than 30,000 genes of the cell’s nucleus.

“These genes talk to the nuclear DNA constantly,” Singh said. That “talk” contributes to both epigenetic and genetic changes in the nuclear DNA leading to apoptosis resistance and development of cancer.

Mitochondrial information transfer can also act outside the cell, such as the release of the mtDNA to trap and kill bacteria and mitochondrial humanin peptide that has neuro- and cytoprotective effects. It can also act between cells, with recent discoveries that one cell can transfer mitochondria to another through nanotubes.

Mitochondria have provoked public policy and ethics debates in the U.S. and U.K. as researchers near the threshold of clinical trials to completely replace the mitochondria of a woman’s egg before IVF, in order to prevent some devastating human diseases caused by mutations in mitochondrial DNA.