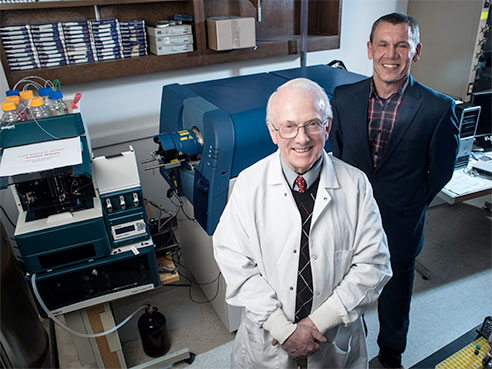 
University of Alabama at Birmingham researchers have made a microscopic snapshot of the early renal lipid changes in acute kidney injury, using a laser-scanning method called MALDI tissue imaging to localize the changes.

These disease-model results, recently published in American Journal of Physiology’s Renal Physiology, show an example of the power of MALDI tissue imaging. MALDI tissue imaging is now available at UAB, and it will be able to aid basic and clinical biomedical research across the campus, said corresponding author Janusz Kabarowski, Ph.D., associate professor of microbiology.

“I think the opportunity to integrate this into existing UAB research centers to facilitate grants is immense,” Kabarowski said. “It can be utilized for any tissue damage. For drugs that can be imaged with MALDI imaging mass spectrometry, you can tell where in a slice of tissue the drugs get to, with obvious implications for testing candidate therapeutic agents in cancer research too. We can capture — at the molecular level — a moment in time.”

The imaging has the power to reveal spatial distribution of complex biochemical processes in an organism, showing where changes in proteins or small molecules take place. Unlike chemical stains, immunohistochemical tags or radioactive labels, it does not require a priori knowledge of the target compounds.

Acute kidney injury is a leading cause of hospital illness or death in critically ill patients. In a mouse model of the injury used by Kabarowski and colleagues, kidneys were made ischemic for 30 minutes. Six hours after reperfusion, and before gross kidney damage was seen, the kidneys were removed and cut in half. The lipids were extracted from one of the halves; the other was flash frozen and cut into thin sections that were mounted on specially coated slides.

Extracted lipids were analyzed using SWATH mass spectrometry, and the UAB researchers found that four were significantly changed at six hours (all were increases). Three of the lipids were ether-linked phospholipids, including a plasmalogen, a type of ether phospholipid thought to have protective anti-oxidant properties. They also found that the levels of these ether-linked phospholipids correlated with levels of plasma creatinine, a marker of acute kidney injury. This suggests a causal or a protective role for them in acute kidney injury, and also suggests they may be an effective early biomarker for injury.

The researchers then used MALDI tissue imaging to find where the most abundant of the ether-linked phospholipids was concentrated. In MALDI, a powerful laser scans the thin tissue section after application of a matrix material by vacuum sublimation, knocking the lipid ions off from the surface of the tissue. The MALDI time-of-flight mass spectrometry and ion fragmentation then allowed identification of the proximal tubules of the kidney as the place where the ether-linked phospholipids were concentrated. The proximal tubules are known to be most prone to developing ischemia-related injury.