New options for residency in Ophthalmology open for young researchers 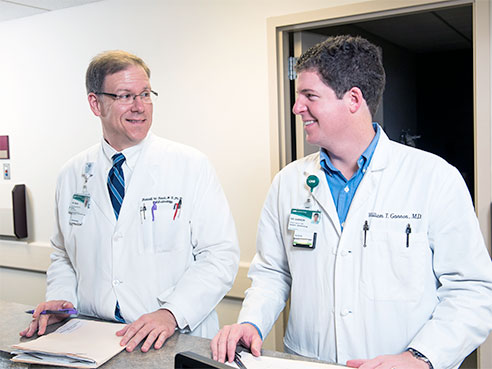 In their first year of the residency program, residents on both tracks complete a one-year project focusing on background, current state of knowledge, and a clinically relevant research component.The UAB Department of Ophthalmology is enhancing its residency program with a new track, giving incoming residents the option to participate in an in-depth clinical or basic research project of their choice.

Both the traditional clinical path and the more research-intensive academic path provide training in research methodology; but residents who choose the academic path will have protected research time during their second year, allowing them to complete an 18-month research project.

In their first year of the program, residents on both tracks complete a one-year project focusing on background, current state of knowledge and a clinically relevant research component.

In their second year, academic-path residents will begin an 18-month research project. This provides more intensive research experience than previously possible. Projects will culminate with the residents’ presenting their findings at the department’s symposium during their third year.

“Any first group of anything is going to set the stage for those that follow,” said Russell Read, M.D., the Max and Lorayne Cooper Professor for Ophthalmology Residency Training director. “We were very fortunate that in the first year we offered this research track we had three of our five first-year residents express interest and choose to do the track.”

Each partnered with a research faculty mentor to develop a project that resulted in multiple presentations and manuscripts.

Parker’s research focuses on a new surgical option for patients with advanced keratoconus called Bowman layer transplantation. Keratoconus is a progressive eye disease in which the normally round cornea thins and begins to bulge into a cone-like shape. This cone shape deflects light as it enters the eye on its way to the light-sensitive retina, causing distorted vision.

The use of Bowman layer transplantation could be a way to halt progressive advanced keratoconus.

“Bowman layer fragmentation is one of the earliest and most significant changes in keratoconus,” Parker said. “Perhaps by replacing the Bowman layer, we can mechanically bolster and shore up the cornea, protecting it from further progression.”

Godara is researching measurement of ocular perfusion pressure in nonhuman studies via continuous radio telemetry, and what that means for the study of glaucoma. Ocular perfusion pressureis thepressureat which blood enters the eye.Glaucoma is the second leading cause of blindness worldwide with more than 50 million people affected, according to the World Health Organization.

Next steps for the program

Read says he expects on average one resident per year will select the research track as it is a demanding curriculum for residents still responsible for clinical activities, call, lecture and conference attendance.

The research track offers the residents five weeks of dedicated block time during their second year to conduct the bulk of their research data gathering.

“These residents are experiencing firsthand, and early on, the realities of life as a clinician scientist,” he said. “They learn how to balance clinical responsibilities and demands with those of their research program.”

Read says the program is important because it teaches the residents clinically relevant issues that require additional understanding and knowledge required to reduce or alleviate human suffering.

“The UAB Ophthalmology Residency program is already a top-tier clinical training program,” Read said. “And this new option gives our residents the opportunity to continue to make a difference in patients’ lives one at a time via excellent clinical care, but also to add to our ophthalmologic knowledge base, enhancing the practice of all ophthalmologists — which is a huge force multiplier in our battle against blinding diseases.”

The hope for this program, Read says, is to light the fire of scientific inquiry in those who participate so that they go on to make the important discoveries needed to improve the care of patients.

“At the least, we expect that participation in the research track will enlighten them to the processes involved in research so they have a fuller understanding and are able to read the scientific literature with an informed, critical eye,” he said. “That will make them better ophthalmologists and lifelong learners.”