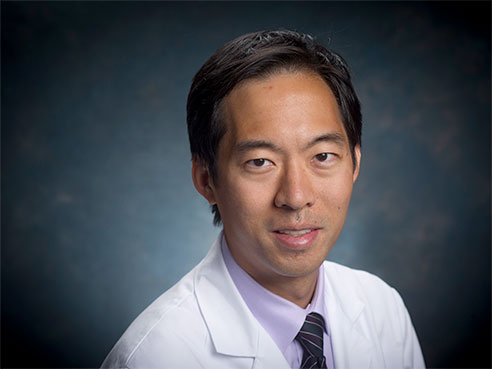 Daniel Chu, M.D.Andrea McMillan is a surgical veteran. The Panama City resident had two procedures at the University of Alabama at Birmingham last winter to treat stage 3 ovarian cancer, followed by a third last September. It is that third surgery that has amazed McMillan.

“Recovering from the first two surgeries was hard,” McMillan said. “I was in the hospital for several weeks, and my pain level was high, around seven on the one-through-10 scale. I was not looking forward to the third surgery.”

But in the intervening time period, UAB surgeons had begun to implement a new surgical pathway called ERAS, or Enhanced Recovery After Surgery.

“My surgeon, Dr. Chu, suggested I was a good candidate for the ERAS approach, saying it should lead to less pain and a faster recovery,” McMillan said. “I said, ‘Sign me up, I’ll take it.’”

ERAS is a fairly simple concept, according to Daniel Chu, M.D., a UAB colorectal surgeon and early proponent of the pathway.

“The ERAS pathway uses best medical and surgical practices to reduce postsurgery pain, increase early physical activity and reduce complications,” said Chu, an assistant professor in the Department of Surgery. “In short, it makes your recovery from major surgery better. It also has been shown to significantly reduce length of stay, complications, readmissions and cost in hospitals across Europe and the United States.”

The ERAS concept began in the 1990s in Scandinavia for colorectal surgery.

“Colorectal operations are difficult surgeries, with a high risk of infection, potential complications and long hospital stays,” Chu said. “There is a lot of room for improvement in the outcomes of these types of procedures.”

ERAS spread across Europe and only recently came to the United States. Chu was training at the Mayo Clinic, one of the first U.S. hospitals to give the process a try. In collaboration with Jeffrey Simmons, M.D., associate professor in the Department of Anesthesiology and Perioperative Medicine, he began to initiate the pathway upon coming to UAB in 2014 and performed UAB’s first ERAS surgery in 2015.

“The ERAS pathway is really quite simple,” Simmons said. “It takes a look at all the pre-, post- and intra-operative procedures and uses a common sense approach to look for ways to improve on each.”

Simmons says ERAS focuses on a number of variables, including non-opioid pain management, getting patients up and walking shortly after surgery, having patients return to a normal diet as soon as possible, and drinking fluids pre- and postsurgery.

“Patient education is a big part of ERAS,” Simmons said. “We do a lot of pre-admission counseling, making sure patients are prepared for surgery and know what to expect as they recover. We set goals and get buy-in from patients. Setting expectations makes hitting those goals easier. It helps make patients active partners with the entire surgical team,not only surgeons and anesthesiologists but also nurses of all specialties, residents, nutritionists, social workers, data analysts, etc., in their recovery.”

“After my first two, non-ERAS surgeries, I was using a wheelchair or walker for weeks,” she said. “Following ERAS, I was out of bed without help on the next day, walking on my own. I was discharged in just three days, and my pain scores averaged around three or four, quite a drop from my previous scores of seven.”

The ERAS project for colorectal surgery, coordinated by Chu and Simmons in conjunction with UAB Care, received a first-place UAB Health System Innovation Award for 2016, as part of a competition designed to encourage creative thinking, improve workflow, and disseminate best practices across UAB Health System entities and affiliates.

The practice caught on in a major way. Through 2016, 80-90 percent of colorectal patients were getting ERAS, and other surgical specialties such as urology were coordinating their own ERAS pathways. More than 700 patients have now undergone a surgery under the ERAS pathway, and length of stay has dropped from five and a half days to three days, while pain scores have decreased significantly.

“Administrative support for ERAS is also important for its long-term success, and UAB has always supported the ERAS concept,” Chu said. “UAB Care, UAB’s clinical effectiveness program led by Chief Medical Officer Dr. Loring Rue, Chief Quality Officer Dr. Ben Taylor, and Quality Improvement Manager Anisa Xhaja, has spearheaded efforts to make the program work, and it is now spreading to surgical disciplines across all of UAB Medicine. It’s a collaborative, multidisciplinary effort to benefit each patient. And there is nothing better than seeing our patients do well.”