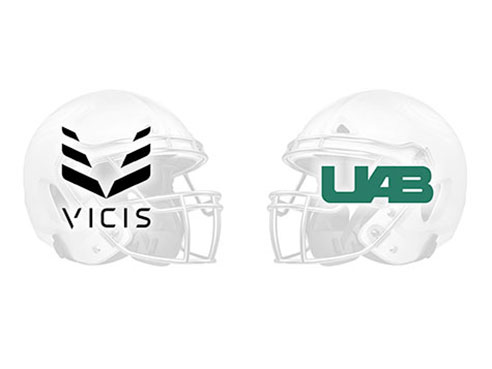 Tackling the concussion crisis in football is at the forefront of sports safety research and development. Through a new partnership, VICIS and the University of Alabama at Birmingham — which have each made major strides in developing next generation football helmets in recent years — are combining expertise and intellectual property to bring more effective helmets to the market.

With industry-leading experts in both engineering and medicine committed to promoting safety in sports, UAB researchers and physicians have advanced a multidisciplinary effort that reaches from basic science labs to large clinical studies to address traumatic brain injury.

Initiatives include those of the UAB Sports Medicine Concussion Clinic at Children's of Alabama, UAB's Vestibular and Oculomotor Research Laboratory that conducts research to identify markers of concussion in athletes, and the UAB School of Engineering, where football helmets can be tested against forces that can cause concussions and where design of better materials for football helmets are being advanced.

VICIS, a Seattle-based company, was founded to develop new football helmet technology that shows significant reduction in impact forces. The partnership with UAB adds expertise to the VICIS team, which is already bolstered by an advisory council that comprises experts and innovators from science and sport, as well as industry partners that have the ability to help make real progress in protecting athletes.

“VICIS’ mission and progress to this point were a perfect match for what UAB brings to the table,” said Kathy Nugent, Ph.D., executive director for UAB’s Bill L. Harbert Institute for Innovation and Entrepreneurship. “Our scientists, physicians and students are working to mitigate concussions in sports in a number of areas across the university and UAB Health System. We are eager to combine the work we have done with the technology VICIS has developed.”

The principles VICIS used to reimagine the football helmet in its initial model, the ZERO1, align with the technology coming out of a UAB Engineering lab. Dean Sicking, Ph.D., and his team of researchers have designed technology based on principles of physics that inspired much of the work he has done over three decades as a world leader in impact reduction in sports. 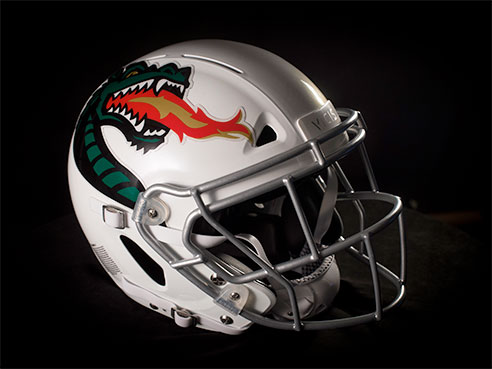 The use of the UAB Athletics mark on the VICIS ZERO1 helmet is for marketing purposes relative to the Vicis/UAB partnership announcement. This is not a uniform reveal for UAB Football. Sicking is best known for his design of interstate guardrails and the Safer Barrier used in NASCAR. Since Safer Barriers were installed in NASCAR courses more than a decade ago, there has not been a single wall-crash fatality. He expects his next major contribution to be the reduction of concussions in football.

Sicking and his lab assistants have used special software to analyze thousands of helmet-to-helmet impacts in football. The sizes and velocities of players involved, where the hits tend to occur on players’ helmets, and a host of other data are measured in their analyses. Those data helped Sicking develop new designs for a helmet that would better protect the player’s brain.

“Football helmets have been designed to prevent skull fracture, and they do a very good job at that,” Sicking said. “But helmets have not evolved to address concussions. A VICIS/UAB partnership can change that.”

The need for helmets that better protect athletes is well-documented, and is backed up by numbers like the approximately 250,000 hospitalizations each year that are a direct result of sports- and recreation-related injuries.

Sicking says helmets need to absorb as much energy of the impact as possible so the person is exposed to less risk of brain injury.

“Players have gotten bigger, faster and stronger, and they’re delivering bigger blows to the head,” Sicking said. “I believe a redesigned helmet with impact reduction at the core of the technology can help make the game safer.”

UAB’s Materials Processing and Applications Development Center engineers took Sicking’s design and have been developing new helmet materials that focus on impact reduction. Separately, VICIS took a similar approach and developed a next generation helmet of its own — the ZERO1, which reduces impact forces. The ZERO1 features a soft outer shell and an underlying layer of columns designed to mitigate collisions from multiple directions.

The new partnership will allow UAB and VICIS to combine technologies and develop next generation helmets, with an eye toward constant improvement and helmets that continue to better protect athletes. 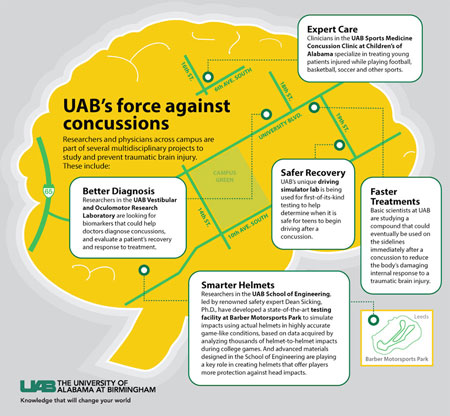 Click to enlarge“The safety and well-being of our student-athletes is our top priority, and being a part of a world class engineering and medical institution provides us a unique opportunity to be a leader in sports safety,” said UAB Director of Athletics Mark Ingram. “This partnership between UAB and VICIS is a wonderful opportunity to leave a lasting imprint on football, and our program looks forward to being involved.”

“The ZERO1 football helmet we are launching this year delivers a significant leap forward in technology and performance vs. conventional helmets,” said Dave Marver, CEO of VICIS. “Our partnership with UAB provides additional horsepower in engineering, materials and neurological science which will help VICIS continue to introduce advancements in helmet technology for the benefit of this great sport and the kids who play it.”

The VICIS ZERO1 model is targeted toward elite athletes, and UAB and VICIS are looking toward protecting players at all stages of the game, from Pop Warner to the NFL.

UAB’s Concussion Clinic at Children’s of Alabama sees 350 children each year who have suffered a suspected concussion.

“At the end of the day,” Sicking said, “the purpose behind our work is to protect these athletes who we now know are suffering long-term implications. We have to do a better job for the future of the game, and for the next generation.”