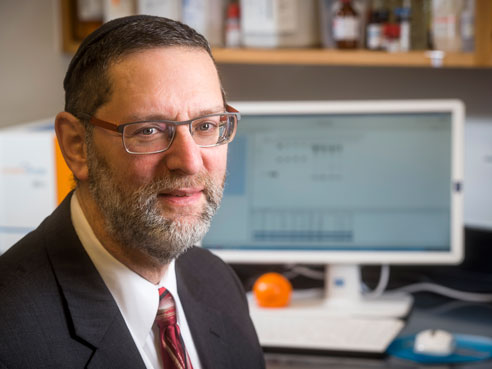 Steven Pittler, Ph.D.In the retina of the eye, rod and cone cells turn light into electrical signals, the first step toward human vision. University of Alabama at Birmingham researchers are studying rod cell proteins GARP1 and GARP2 to learn how they function in normal phototransduction, as well as in abnormal degeneration of the retina that can lead to blindness in diseases like retinitis pigmentosa.

In experiments published in Scientific Reports, Marci DeRamus, Ph.D., Steven Pittler, Ph.D., and colleagues show that GARP2 accelerates retinal degeneration in mice that lack another rod cell protein involved in producing the electrical signal. The knockout genetic background they used allows the potentially detrimental effect of GARP1 and GARP2 to be amplified, and also allows the possible roles of GARP1 and GARP2 to be distinguished.

The goal is dissecting the roles of GARP protein structure and function in the light-sensing rod cells.

DeRamus and Pittler, UAB School of Optometry, also have made an important step toward creating a standardized nomenclature between mice and humans for one measurement of retinal degeneration called optical coherence tomography, or OCT. This simple, non-invasive imaging test uses light waves to produce a cross-sectional picture of the retina’s distinct layers, allowing determination of layer thickness and integrity. Eye doctors worldwide use OCT as a way to monitor retinal health in patients.

In the paper, DeRamus and Pittler propose a uniform standard for mouse OCT nomenclature labeling, which they say has so far been incomplete, inconsistent between groups of researchers and often in conflict with the recently established human OCT nomenclature.

“This new standard represents the most accurate alignment and layer designation for the mouse to date,” they wrote in the paper. “Adoption of this nomenclature will create a single standard for OCT layer designation and facilitate comparisons of OCT results from different labs.”

“Ophthalmologists worldwide use OCT to diagnose and manage retinal disease,” said Christine Curcio, Ph.D., a professor in the UAB Department of Ophthalmology who has been involved in establishing the human OCT layer designation. “Similar nomenclature for OCT imaging of mice will help speed the translation of laboratory findings to clinical utility.”

Distinguishing different roles for GARP1 and GARP2 is muddled by their overlap. They are generated from the same gene and are identical for 318 amino acids, which is nearly all of GARP2’s 326 amino acids. The 550-amino-acid GARP1 has an additional 232 amino acids not found in GARP2. GARP1 and GARP2 are intrinsically disorganized proteins, which may permit multiple conformations that drive interactions with multiple proteins.

The UAB researchers bred knockout mice that lacked a rod protein called cGMP-gated cation channel beta-subunit and the GARP proteins, which are all encoded by the same gene. The beta-subunit is part of the membrane channel that fires the electrical signal in rod cells in response to light. Then, they bred the knockout mice with three more strains of mice expressing either just GARP1 alone, just GARP2 alone, or both GARP1 and GARP2.

They followed retinal degeneration in these strains at three and 10 weeks, using OCT and light and transmission microscopy to measure thinning of the outer nuclear layer, which contains the cell bodies of the rods and cones. They also measured thinning of the full retinal thickness. They measured functional loss by electroretinography.

Thus, GARP2 appeared to accelerate retinal degeneration. However, when both GARP2 and GARP1 were present, GARP1 appeared to slow the negative effect of GARP2. This suggests that the two proteins have distinct and separate roles in the rod photoreceptors.

First author DeRamus is a postdoctoral fellow, and Pittler is a professor in the Department of Optometry and Vision Science, UAB School of Optometry.