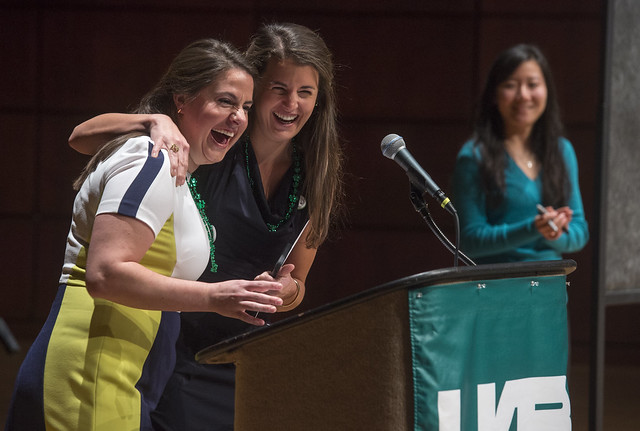 The 2017 graduating class of the University of Alabama at Birmingham School of Medicine celebrated another successful Match Day on Friday, March 17. With 98 percent of students matching into residency positions, UAB students will continue their medical education at 75 institutions in 29 states across the country.

“This day means a lot to us,” said Xavier Baldwin, who matched into general surgery at UNC. We spend the last four years spending late hours studying and taking tests. The last four years of hard work all falling down to this moment, and it means so much.”

The match only continues to grow. According to the National Resident Match Program, which coordinates the residency match process, this year’s was the largest on record, with more than 43,000 applicants from U.S. medical schools, international medical schools and osteopathic schools competing for 31,757 residency positions.

Drew Buie was excited to learn he matched into pediatrics at UAB, saying he’s excited to continue working with physicians he has gotten to know and respect during his time in medical school.

“If you find what you love and find that you love what you do, it doesn’t matter what the hours are, so I’m pretty excited," Buie said.

UAB is also celebrating a successful recruitment for residents in its 33 residency programs. A total 220 new residents, representing 63 U.S. and 27 international universities, will begin this summer in in programs at Birmingham, Huntsville, Selma and Montgomery.

“Residency is the next step in my training, certainly not the end of the road,” said Lauren Theiss, who will be training for the next seven years in UAB’s General Surgery Residency Program. “I’m looking forward to continuing my medical education and taking that next step.”

The largest number of students matched into internal medicine at 28, followed by 24 in pediatrics, 18 in general surgery and 17 in both emergency medicine and family medicine. Students also matched in other medical specialties, including 12 in obstetrics and gynecology; six each in anesthesiology and orthopedic surgery; five each in psychiatry, diagnostic radiology and ophthalmology; four each in neurology, dermatology, medicine-pediatrics and radiation oncology; three in oral and maxillofacial surgery; two each in pathology, child neurology and physical medicine & rehabilitation; and one each in neurosurgery, urology and vascular surgery.