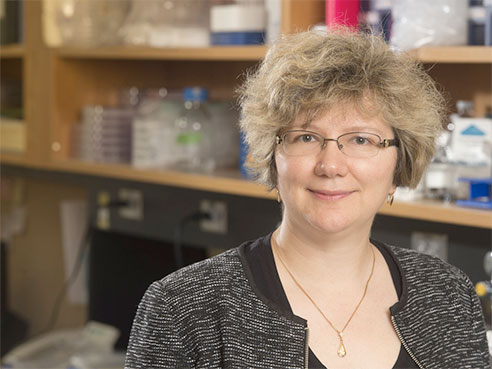 Eugenia KharlampievaMany potent anti-cancer drugs have major drawbacks — they fail to mix with water, which means they will have a limited solubility in blood, and they lack selectivity to cancer cells.

Researchers at the University of Alabama at Birmingham and Texas Tech University Health Sciences Center have developed micro-cubes that can sponge up a hydrophobic anti-cancer drug and deliver it to cancer cells. Tissue culture tests show these tiny, porous cubes, loaded with the hydrophobic drug, are more potent against liver cancer cells and less harmful to normal liver cells, compared to the drug alone.

“We believe that our novel drug-delivery platform for the highly potent anti-cancer drug BA-TPQ provides a facile method for encapsulation of hydrophobic drugs and can facilitate enhanced efficacy for liver cancer therapy,” the researchers said in an Acta Biomaterialia paper. The liver cancer, hepatocellular carcinoma, is the third-leading cause of cancer death worldwide, and the need for new curative compounds that can improve patient outcomes is urgent.

BA-TPQ is an iminoquinone derivative, and it is one of the most potent analogs of natural anti-cancer compounds discovered in the Philippine sponge Zyzzya fuliginosa.

BA-TPQ has high potency against human breast and prostate cancer cell lines, but its use has been limited by poor solubility, low bioavailability and undesirable toxicity. The goals for a delivery system are improved anti-cancer efficacy and reduction of side effects.

The research was led by co-senior authors Eugenia Kharlampieva, Ph.D., and Sadanandan E. Velu, Ph.D., both associate professors of chemistry in the UAB College of Arts and Sciences, and Ruiwen Zhang, M.D., Ph.D., professor in the School of Pharmacy, Texas Tech University Health Sciences Center. 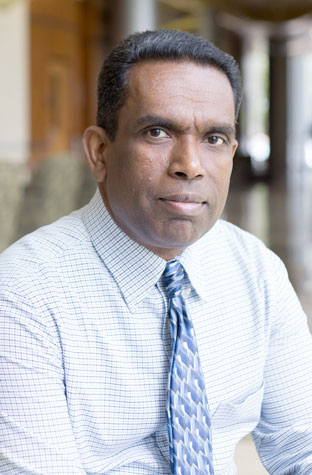 Sadanandan VeluThe drug-loaded cubes can be freeze-dried and then resuspended in solution without losing their shape, which may allow long-term storage of the cubes as powder.

Besides the selectivity of the BA-TPQ-hydogel cubes for the two lines of liver cancer cells tested in comparison with normal liver cells, the drug-loaded cubes affected expression of genes involved in cancer promotion or prevention.

For one line of liver cancer cells, encapsulating BA-TPQ within the hydrogel cubes significantly amplified the potency of BA-TPQ to decrease the expression of the oncogenic protein, MDM2, and increase the expression of the tumor suppressor, p53, and the cell proliferation suppressor, p21. Tests in another line of liver cancer cells showed that the enhanced inhibition of MDM2 by BA-TPQ-hydrogel cubes was independent of p53 status, which means that for cancer cells with p53 mutation, commonly occurring in hepatocarcinoma cells and promoting tumorigenesis, the BA-TPQ-hydrogel cubes may be a successful candidate for anti-tumor treatment.

While hydrogel cubes loaded with BA-TPQ can be delivered intravenously, the researchers also showed they also have potential to be taken orally. The drug-loaded cubes retained their integrity when exposed to a strong acid environment of pH 2, mimicking stomach conditions, and they showed increased permeability across an epithelial cell monolayer, compared to drug alone, which indicates a better chance of absorption for the drug-loaded hydrogel cubes from the gut.

Co-authors of the paper, “Highly efficient delivery of potent anticancer iminoquinone derivative by multilayer hydrogel cubes,” are Bing Xue, Wei Wang, Jiang-Jiang Qin, Bhavitavya Nijampatnam, Srinivasan Murugesan and Veronika Kozlovskaya. Wang and Qin are in the School of Pharmacy, Texas Tech University Health Sciences Center; the other co-authors are in the UAB Department of Chemistry.