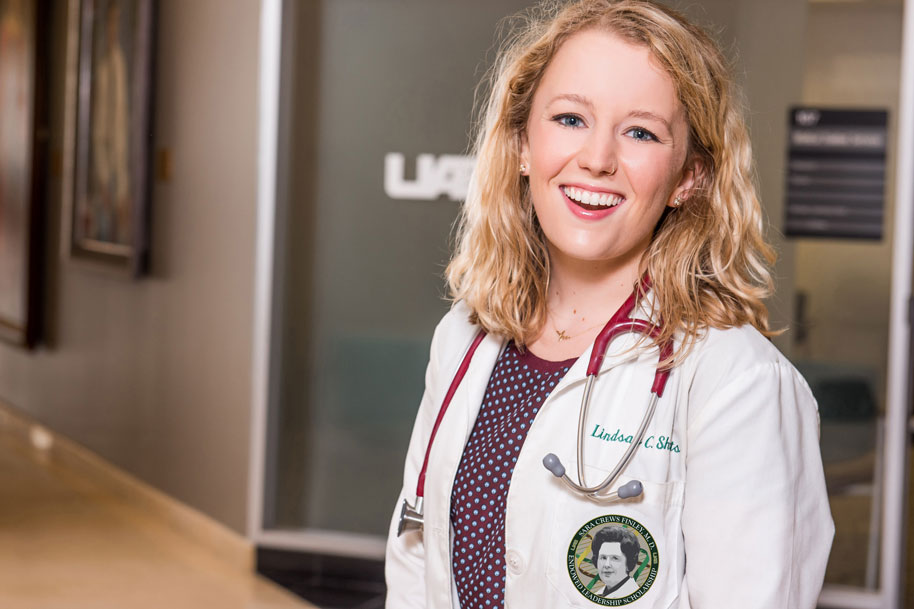 Lindsay Claire Sheets has been selected as the 2017 recipient of the Sara Crews Finley, M.D., Endowed Leadership Scholarship. The scholarship, which supports students who demonstrate exceptional academic and leadership abilities, includes full tuition for the third year of medical school and is renewable for the fourth year.

At the School of Medicine’s White Coat Ceremony for incoming students on Sunday, August 13, Sheets received a new white coat with special insignia identifying her as the Sara Crews Finley, M.D., Leadership Scholar.

“Among the many reasons I feel honored to receive this award is having my name associated with Dr. Finley’s,” said Sheets. “She was a true pioneer for women in medicine. Her career inspires me because she blazed a trail for herself and for other female physicians and scientists. Being honored with this award, with her name, reminds me that not only can I overcome the stumbles and struggles I’ve faced and will face in my medical career, but I can also conquer them.”

Sheets is no stranger to overcoming adversity. Three weeks after being born in a small town in Kentucky, she had to undergo heart surgery when it was discovered she had a coarctation of the aorta and bicuspid aortic valve. Later, Sheets became part of a clinical trial to see if ACE inhibitors were effective for controlling blood pressure in children. “I was up there every week and got very used to being in that type of environment,” said Sheets. “Since then, I have always felt really comfortable in a doctor’s office and always had a great relationship with my pediatric cardiologist.”

Sheets’ heart condition was not the only factor that pushed her toward pursuing a career in medicine. Growing up, she also spent a great deal of time in the hospital while her grandmother battled debilitating rheumatoid arthritis. “It got to the point where it took over her whole body,” said Sheets. “Every night my mother would call from the hospital and just cry to us about how wonderful the doctors were and how much it meant to her that they were taking such great care of my grandmother. After experiencing that, it solidified my decision that medicine was the path I wanted to be on.”

Sheets says she took advantage of the opportunity to pursue interests outside of medicine when she was in college at Birmingham-Southern. “I knew the rest of my life, or at least the rest of my schooling, would be focused on science and I am inherently a humanities-minded person,” she said. She declared a Religious Studies major in her sophomore year after becoming involved in the religious life at Birmingham-Southern. “I found I was very excited about learning about different religious around the world, where they came from, and the cultural and historical contexts they were born out of.”

Her own faith and passion for learning about and helping others sparked her interest in community service during medical school. During her first and second years of medical school, Sheets became heavily involved with the Equal Access Birmingham Clinic, the medical student-run free clinic for the underserved, where she served as the research officer during her second year. As a first-year M.D./MPH student, she also was chosen as co-coordinator for the Global Health Interest Group. In that role, Sheets attended the largest global health conference in the world at Yale University and helped first-year students interested in global health plan summer research trips. “We were able to use our resources to help one student plan a trip to Uganda and help him recruit students to go,” said Sheets. “It was such a great group to be a part of, and I miss getting to be there all the time now that I am in the hospital.”

Sheets says she is excited about getting to remain in Birmingham during her final years of medical school and hopes the next year will bring more clarity. She has yet to decide on a specialty, noting that she has a diversity of interests that she calls “both a blessing and a curse.” However, Sheets says she does know the types of patients with whom she would like to work. “I feel I’d like to work with the patients who have a lot of barriers to receiving care and who may not always feel appreciated,” said Sheets. “I just enjoy working with people who remind me how to love.”

The Sara Crews Finley, M.D., Endowed Leadership Scholarship honors the legacy of a pioneer in medical genetics and a beloved faculty member and student mentor. Along with her husband, Wayne H. Finley, M.D., Ph.D., Dr. Sara Finley co-founded the first medical genetics program in the southeastern U.S., and was co-director of the Laboratory of Medical Genetics at UAB for more than 30 years. In recognition of their collective contributions, an endowed chair in medical genetics and the conference center at UAB’s Hugh Kaul Genetics Building bear their names.

"We are so proud that Lindsay has been chosen as the third recipient of the Sara C. Finley, M.D. Leadership Scholarship,” said Sara J. Finley, daughter of Drs. Wayne and Sara Crews Finley.  “Lindsay exudes a deep passion and commitment for service and a desire to reach across boundaries to help people live healthier lives. She reflects the ideals of our scholarship program with her outstanding record of academic achievement, community leadership, and compassion for others. We were so impressed by Lindsay and by the other outstanding finalists this year, and we are pleased to see the scholarship program flourish as it enters its fourth year.”