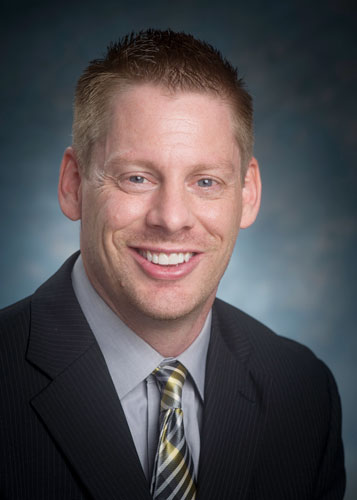 Thomas Buford, Ph.D., Division of Gerontology, Geriatrics and Palliative Care and associate director of the Center for Exercise Medicine. Every day, millions of older adults take antihypertensive medications to regulate their blood pressure. Two new studies at the University of Alabama at Birmingham will investigate whether some antihypertensive drugs could also contribute to maintaining mobility and physical independence.

Thomas Buford, Ph.D., an associate professor in the Division of Gerontology, Geriatrics and Palliative Care, recently received two R01 grants from the National Institute on Aging — one for a human study and one for an animal study.

The ACES trial — Antihypertensives Combined with Exercise for Seniors — will study the effects of differing antihypertensive medications on physical function and other cardiovascular risk factors among older adults when combined with exercise. The second study, in older rats, will examine a new compound, known as angiotensin converting enzyme 2 or ACE2, with potential to improve upon existing therapies.

Buford says he hopes the studies will lead to a change in the way doctors prescribe both antihypertension medications and exercise for patients coping with high blood pressure.

“This study may have important implications for millions of older adults taking antihypertensive drugs,” Buford said. “We hope to identify one or more drugs that, in addition to controlling blood pressure, also offer supplemental benefits important to older adults in terms of mobility. This would be critical information for patients and clinicians.”

The ACES trial continues research Buford started at the University of Florida, including a pilot project funded by the American Heart Association. He joined the faculty of the UAB Department of Medicine in the School of Medicine as an associate professor and as associate director of the UAB Center for Exercise Medicine in July 2017.

“A major theme in biomedical research over the past two decades has been translation, ensuring that research findings ultimately improve human health,” Buford said. “Possibly the most exciting aspect of these awards is that the human trial translates years of prior work on animals in this area. Moreover, the animal trial is an example of reverse translation, where we continue to build on what we know, so that hopefully we can apply it to humans for even better treatments.”

For years, researchers and clinicians have known that the renin-angiotensin system, a hormone system, is involved in the regulation of arterial blood pressure. In recent years, however, scientists have discovered that the RAS has a number of physiologic effects beyond simply regulating blood pressure. In particular, these effects appear to be particularly intriguing when combined with exercise.

The ACES study, funded through 2022, aims to look at the effects of three different antihypertensive medications when given in combination with aerobic exercise. The animal study will explore the utility of ACE2 — a more recently discovered compound involved in regulating the RAS. The ACE2 compound directly activates beneficial actions of the RAS, including the dilation of blood vessels. This study will complement the human trial by also evaluating the effects of ACE2 on late-life physical function both with and without exercise.