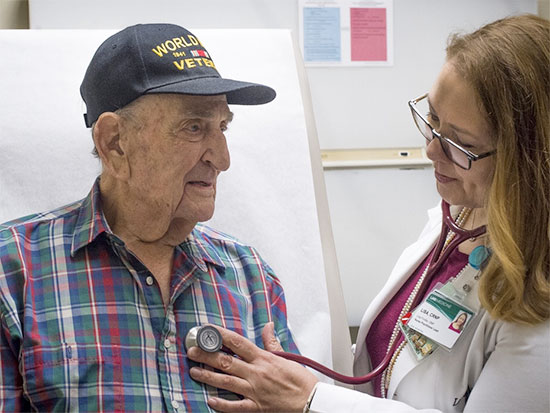 Harden Davis (left) is examined by Lisa Findley, DNPHarden Davis, 93, is a survivor of the Great Depression, a World War II veteran and husband to a wife of 73 happy years. He has led a full life — one he is not ready to hang up just yet. But in early 2017, Davis began noticing that he was short of breath after walking short distances.

“I would walk 30 or 40 feet, and then I would have trouble breathing,” Davis said.

Davis and his wife, Odie Bell, consulted with their doctor in Cullman, and he suggested they make an appointment to see an interventional cardiologist at UAB Hospital. It was there where Davis found out he had severe aortic stenosis. Aortic stenosis occurs when the heart’s aortic valve narrows, preventing the valve from opening fully.

After consulting with UAB Division Director of Cardiothoracic Surgery James Davies, M.D., it was recommended that Davis undergo transcatheter aortic valve replacement, or TAVR. The technology available at UAB for surgeons to perform a TAVR procedure is among the most advanced in the Southeast. In a hybrid operating room with both surgical and X-ray capabilities, a multidisciplinary team places a guidewire through the malfunctioning valve, either from the groin or through a small incision between the ribs in the chest. The new valve is compressed on a flexible catheter. With imaging guidance, it is positioned inside the malfunctioning valve, then expanded to replace the malfunctioning valve.

In more than four years of performing the procedure, UAB is the only hospital in Alabama that has been able to perform more than 500 TAVR cases. Davies credits his staff and the resources UAB is able to provide in changing so many lives.

“We started the TAVR program in 2012 and had a big team to help us, and since that time we have done more than 500 cases,” Davies said. “This has allowed us to provide care for a group of people we probably wouldn’t have been able to provide care for.”

What makes TAVR unique is that it provides easier recovery compared to open-heart surgery, as patients typically do not stay in intensive care as long.

Lisa Findley, DNP, who serves as the lead nurse practitioner for the valve program, says that, like most patients, after his 30-day checkup Davis should be able to resume all his normal activities.

“He looked so good at his 30-day visit,” Findley said. “He was much more active.”

These positive prognostications gave Davis the encouragement he needed to continue doing what he loves — spending time with his wife.

“I feel so much better after this procedure,” he said. “It’s really amazing, and I’m so thankful for all my doctors here at UAB.”

The Davises were not unfamiliar with TAVR, as Odie Bell underwent the same procedure just a few months earlier. They are the first husband-and-wife duo to receive TAVR procedures at UAB.

“We always do things together,” Davis said. “So why not do this too?”

With the TAVR procedure a success, Davis has one more obstacle in his rear view mirror.

Work was hard to come by for many Americans during the Great Depression, and Davis was not immune. In 1933, President Franklin D. Roosevelt established the Civilian Conservation Corps as part of his New Deal. The CCC was a public work relief program for unemployed, unmarried men where they would work on environmentally beneficial projects. Davis joined in 1943 when he was 17.

Although he was not of age when the United States entered World War II in 1941, Davis immediately volunteered when he became 18 in 1944. After enlisting, he was stationed at Hickham Air Force Base in Honolulu. He was later deployed to the Pacific as part of the Army Air Corps — later known as the United States Air Force — and although he never saw combat, Davis believes all men who fought in the war were a part of something bigger.

After the war ended, Davis became a machinist for different aviation manufacturing companies in Michigan and Florida. He and his wife eventually retired to Garden City, Alabama.