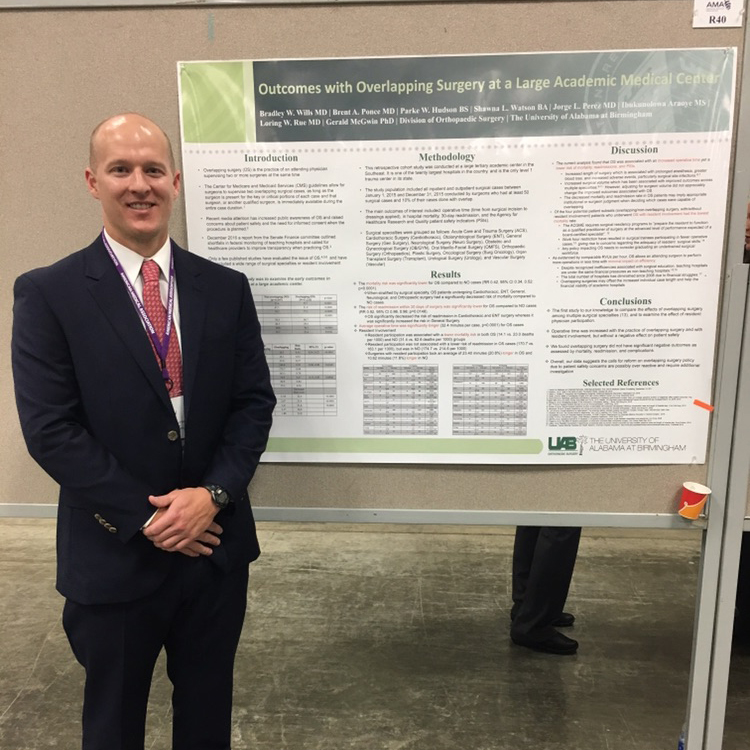 Bradley Wills, M.D., a PGY-4 resident in the Department of Orthopaedic Surgery at the University of Alabama at Birmingham, won in the Resident-Fellow Section Division for Clinical Medicine at the 2017 American Medical Association (AMA) Interim Meeting for his poster titled, “Outcomes with Overlapping Surgery at a Large Academic Medical Center.”

His poster bested 31 other entries in the category, which included entries from participants who attend residency and fellowship programs across the United States. Wills received $300 for his first place win, which occurred in November at the Honolulu-based meeting. His poster also previously won first place at the Medical Association of the State of Alabama’s Second Annual Poster Symposium in April.

“Dr. Wills and his co-authors—including Drs. Brent Ponce, Loring Rue and Gerald McGwin—are to be congratulated for their work on a very timely subject of great interest to the surgical community,” said Steven Theiss, M.D., the John D. Sherrill Chair of Orthopaedic Surgery and the interim chair of the UAB Department of Orthopaedic Surgery.