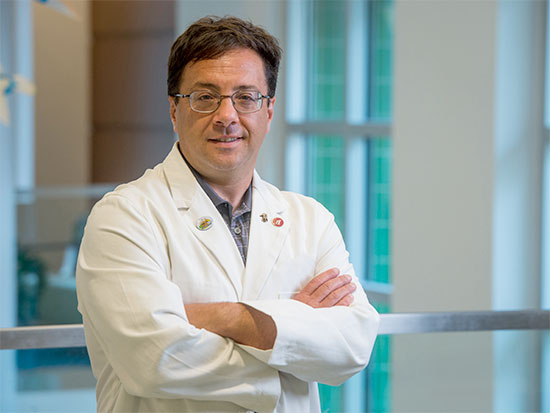 David Askenazi, M.D.Preterm neonates who are exposed to caffeine within the first seven days after birth have reduced incidence and severity of acute kidney injuries than neonates who did not, according to findings from the Neonatal Kidney Collaborative’s Assessment of Worldwide Acute Kidney Injury Epidemiology in Neonates study, published in JAMA Pediatrics. David Askenazi, M.D., professor in the University of Alabama at Birmingham’s Department of Pediatrics and director of the UAB and Children’s of Alabama’s Pediatric and Infant Center for Acute Nephrology, was the study’s co-author, and is the chair of the Neonatal Kidney Collaborative.

“We have found that neonatal acute kidney injury occurs in one of every four preterm neonates and has an association with increased hospital stays, medical expenditures, morbidity and mortality,” Askenazi said. “This research provides hope that interventions — in this case, caffeine administration — can help neonates with who are at an increased risk of acute kidney injury.”

The multiple-center, cohort study evaluated 675 preterm neonates born at less than 33 weeks’ gestation and found that 11.2 percent of neonates who received caffeine developed acute kidney injury versus 31.6 percent of those who did not get caffeine.

In neonatal intensive care units across the country, neonates are given caffeine to stimulate them and allow their underdeveloped lungs and brains to continue to breathe; caffeine has been used for years to prevent episodes of apnea intermittent hypoxia and need for intubation. This study suggests caffeine may also help the kidneys.

“The study’s findings certainly have potential to change clinical treatment and timing of caffeine provision, which may ultimately reduce the morbidity and mortality associated with neonatal kidney development and disease,” Askenazi said.