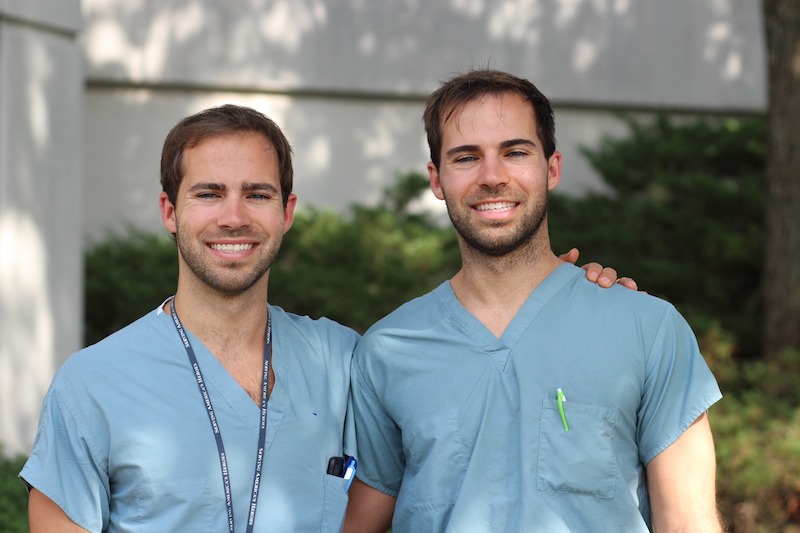 The Cone brothers–Ryan Cone, M.D. (PGY-2) and Brent Cone, M.D. (PGY-1)–will have the same rotation at Highlands Hospital in January and February of 2019. They are both residents in the Department of Orthopaedic Surgery, and perhaps most notably, they are also identical twins.

The brothers, who are originally from Atlanta, were fourth-year medical students at the Medical College of Georgia in Augusta when Brent decided to move to Birmingham. He came to UAB to pursue additional research with the Orthopaedics faculty while earning his medical degree. While at UAB, he recommended the residency program to Ryan. “Brent was my inside source. He told me it was a really good program—that’s why I wanted to come to UAB,” said Ryan, the older of the two by exactly 1 hour and 30 minutes.

They both ultimately matched into the program just one year apart. They say they were drawn to orthopaedic surgery because they like the atmosphere of the specialty, where they can work with their hands to make a dramatic and immediate difference in a patient’s situation. “You can visually see the improvement while you’re operating,” said Brent. “We like doing work that’s tangible and in the moment.”

They aren’t sure what their plans after residency will include or whether they’ll work together. But they are sure that UAB was an important marker in their relationship. When Brent moved to Birmingham, “It was our first time to live in different areas. We became separated, and then fate forced us back together,” said Ryan.