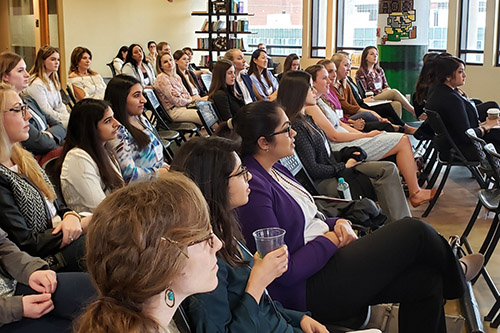 When twelve women physicians met in Chicago in 1915 to form the Medical Women’s National Association (the forerunner to the American Medical Women’s Association), it’s unlikely that they saw their effort taking hold in academic medical centers throughout the entire nation and serving as a powerful voice for change. A century later, the UAB Chapter of the American Medical Women’s Association (AMWA) carries on the legacy of those crucial first voices in advocating for women in medicine and science, offering mentoring and networking, and providing resources for students, trainees, and faculty to use in their professional development.

For the second year in a row, the School of Medicine’s AMWA chapter hosted the Region 5 conference February 15-16. Drawing together women physicians from throughout the southern United States and the Caribbean, this event brought participants from as far as Puerto Rico to workshop, network and learn.

The Friday, February 15 sessions were targeted at women faculty and took place in Margaret Cameron Spain auditorium. The conference was introduced by Lauren Walter, M.D., who has served as the UAB AMWA Chapter President since its revival in 2015. Speakers discussed the importance of self-care for physicians, the path to promotion and tenure, and the way to become effective leaders.

Speaking at the Friday session, Mona Fouad, M.D., MPH, senior associate dean for Diversity and Inclusion, shared that the need for the AMWA has not abated over the last century. “Although more women than men were admitted to medical school than men in 2018 – a tremendous advance from a few decades ago when women represented less than a third of matriculants – the number of women at the highest levels of academic medicine remains painfully low,” she said. “According to the Association of American Medical Colleges, only 16% of permanent deanships at medical schools are held by women. While the representation of women who are full professors in academic medicine has increased, it still lingers at only 21%. And while the proportion of new faculty hires who are women has increased in the last 10 years, so has the proportion of faculty departures who are women.” She pointed out that the representation of women in medicine and science isn’t merely a “women’s issue,” since without effective representation of women, the medical community as a whole loses out on their insights and potential contributions.

Friday night activities concluded with a networking event at the Wine Loft, which included a silent auction to raise charitable funds. Attendees – not only faculty, but students and trainees as well – enjoyed food and conversation and forged new connections.

Saturday’s events were more specifically targeted at medical students and included a suturing workshop, a session on effective CV creation, a panel on choosing a specialty and a discussion on Medpride. Forty posters were accepted for the morning’s poster session, and they showcased original research from throughout the region. Events concluded with poster awards at noon. Fouad, whose Office for Diversity and Inclusion sponsored the conference, noted the importance of these events. “Each person here has an important part to play in building the future of medicine and science,” she said. “This is not only a labor of love, it is a solemn charge and will require all the resources at our disposal. AMWA is one such essential resource, and for that we should all be thankful.”