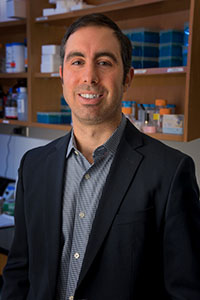 The New Neighbors League Club (NNLC) of Birmingham gave a $4,000 gift to the Alzheimer’s Research Program led by Jeremy Herskowitz, Ph.D., assistant professor in the UAB Department of Neurology. The NNLC raised most of the money through its Mah Jongg Tournament and Fundraiser held in March.

This gift will help Herskowitz continue to pursue his important work in Alzheimer’s disease research. He and his research team work to better understand what causes Alzheimer’s at the molecular level and how those underlying changes to the brain can be stopped or reversed.

Herskowitz’s past research efforts have included identifying an enzyme in the brain that may be an intriguing target for interventions against Alzheimer’s disease and other dementias. He has also been studying what differentiates people who have amyloid-beta and tau pathology in their brains but do not develop dementia from those who have dementia.

“There are large numbers of individuals from between the ages of 60 and 100 who have Alzheimer’s pathology but no dementia,” says Herskowitz. “Now we understand that some individuals can withstand dementia despite harboring the pathology in their brains. We will focus on drugs to remodel the synapses in patients prone to Alzheimer’s to slow down the development of dementia.”

The NNLC is a not-for-profit social and service organization. Its main focus is to bring together new neighbors in the Birmingham area through a wide variety of events and activities, including monthly luncheons and programs. The NNLC also focuses on service to the community by contributing time and money to local charitable organizations.